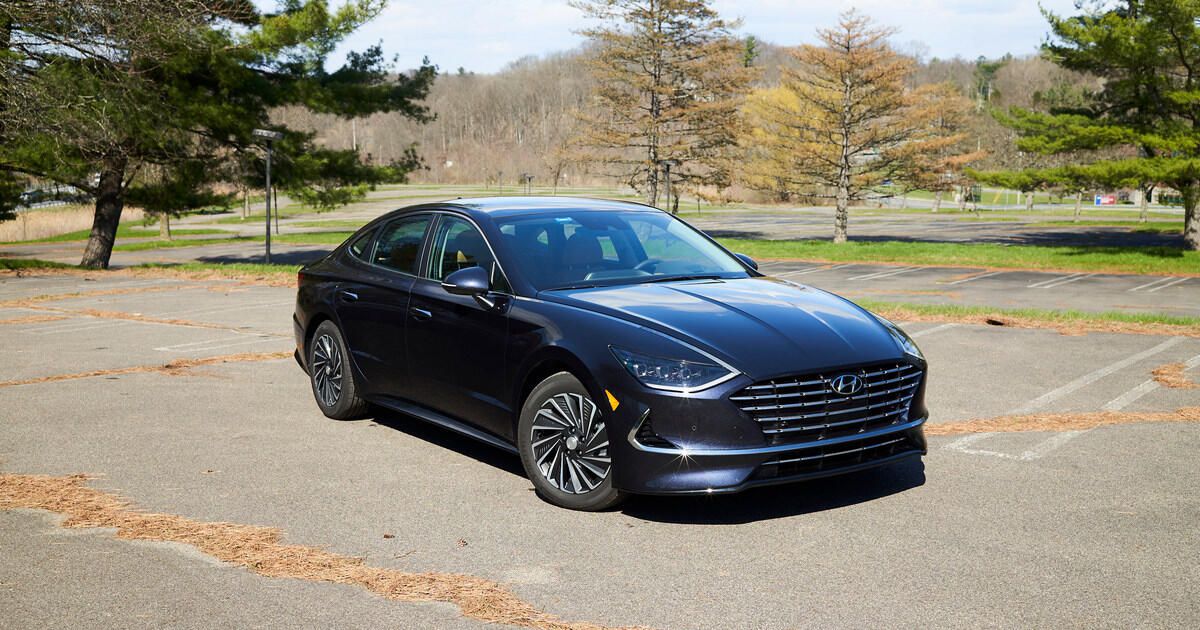 How do you take a good-looking, practical, value-oriented family sedan and make it even better? You dial up the fuel economy. That’s just what we have here in the 2020 Hyundai Sonata Hybrid. It takes the new Sonata, which we already know and love, slaps in a tech-forward hybrid powertrain and then caps it off with a fancy, solar roof.

The result? An impressive EPA fuel economy rating of 54 miles per gallon on the highway for the Blue trim, up 18 mpg from the sedan, all without any real negative repercussions — except for the $4,000 upcharge, of course.

Visually, little has changed from the standard 2020 Sonata sedan and in my book that’s a good thing. I appreciate that the chrome line running from each headlight all the way back past the rear doors will not be for everyone, but I’m a big fan of the car’s distinctive looks.

And if you don’t like brightwork, I’m sorry to say the Hybrid Limited comes standard with the base Sonata SE’s chrome grille. While this adds a fair bit of pop to the car’s forward presence, I do have a slight preference for the darker grille on the SEL and Limited non-Hybrid trims. Here, that grille has been augmented by active-aero flaps to reduce drag, while a petite spoiler sits on the rear deck and a unique set of 17-inch wheels bring this car to the ground.

All that helps the car earn a 0.24 drag coefficient, though none of it does much to set this car apart from its traditionally powered predecessor. Take a closer look at the Hybrid Limited’s roof and it’s a world of difference, though. Up there you’ll find a tidily integrated array of solar panels that have a delightful futuristic depth to them, like if you squinted hard enough you could see Kevin Flynn’s Lightcycle carving its way through the sun-catching circuitry.

Tron aspirations aside, this roof is said to add up to “a couple of miles” to the car’s range after a day sitting in the sun. I’m sorry to say I never saw an increase during my testing, but then again, the week I tested the car was in the midst of a particularly rainy, cloudy and generally miserable spring, so I won’t hold that against the Hyundai. Still, such charging could be ideal for long-term parking and the like, while really any external boost to the range is appreciated given this isn’t a plug-in.

And how does it feel on the road? The base Hyundai Sonata, with the 1.6-liter turbocharged I4, is torquey, smooth and, while far from sporty, definitely fun to drive. The Hybrid? More of the same. Here we have a 2.0-liter Smartstream I4 that produces 150 horsepower and 139 pound-feet of torque. That’s mated to a sizable 56-kilowatt lithium-ion battery pack and electric motor, which bring 51 hp and 151 lb-ft to the party.

Hyundai says combined output is 192 hp and, while the company doesn’t quote a combined torque figure, it’s surely more than the 195 lb-ft from the non-hybrid car’s 1.6-liter I4. The Sonata Hybrid is strong off the line and throttle response is excellent, aided by a six-speed transmission that uses a new technology Hyundai calls Active Shift Control. Basically, the car monitors engine rotation speed and uses the electric motor to ensure the transmission speed matches. This makes up for the lack of a torque converter and, according to Hyundai, boosts shift speed by 30%.

I can’t say I was really rushing the transmission in my time with a Sonata Hybrid, but the shifts are indeed quick and smooth, though perhaps a bit less slick than the standard Sonata’s traditional, eight-speed slushbox. The brakes, too, are slightly more harsh, but I actually like that. The regen of this hybrid feels more like that you’d expect on a full EV. It’s well short of one-pedal driving, but it’s good to know you’re sending more juice into the battery and less into heating up the brake discs.

On the inside of the Limited, there are many great ways to use that juice thanks to a fully digital gauge cluster, a wide, 10.3-inch touchscreen infotainment system with NFC pairing, wireless charging and a head-up display. Hyundai’s infotainment software is basic but functional, kindly offering both Android Auto and Apple CarPlay, though sadly neither integrates with the navigation prompts on the HUD. When you’re away from your car, Hyundai’s smartphone app enables the usual suite of remote starting and pre-conditioning capabilities, though you can also remote-start the car directly from the key — when in range. Or, if you have an Android phone, you can just leave your physical key at home and use the Hyundai Digital Key.

The car’s interior has few disappointments, the cream dash and seats on my car pairing nicely with the dark blue interior and gratuitous chrome trim to create a bright feel that’s sadly rare in modern cars. The materials are nice, the 12-speaker Bose system on the Limited trim is strong and really the only concerns I had, which were minor, were with the single USB port for rear-seat occupants and an inability to fold the 60/40 rear seats down without first opening the trunk.

The tech continues through the driving, with a comprehensive suite of active safety systems standard on all Sonata Hybrids, including adaptive cruise control that’ll take you to a full stop, automatic emergency braking with pedestrian detection, driver attention warnings and rear-seat occupancy reminders. Step up to the Limited trim — like you see here — and you get niceties like ventilated front seats, LED headlights and interior lighting and a 360-degree camera system.

And what about the most important aspect of the thing, the fuel economy? Well I’m sorry to say that I didn’t quite meet the EPA’s rating of 45 city, 51 highway and 47 combined. In my mixed driving, which was about 50/50 country and highway, I saw an average of 43.9 mpg. That’s despite a light foot and plenty of use of cruise control. But, again, my testing took place over some unseasonably cold weather. When my colleague Steven Ewing took a similarly equipped Limited for a 100-mile tour around Los Angeles, he saw 51.3 mpg.

Meanwhile, the Blue trim promises to do even better, with an EPA combined rating of 52 mpg. You’ll have to make do with a cloth interior, smaller infotainment screen and some other cuts, but you’ll save a lot of cash. The starting price on a 2020 Hyundai Sonata Hybrid Blue is $27,750, plus $975 for delivery. Step up to the SEL — which crucially adds heated seats and a few other niceties — and the price goes to $29,900. The full-fat Limited, the only trim with that trick solar roof, starts at $35,300.

It’s a substantial premium, but for everything on offer here and with the drive quality plus the look of the thing, it still feels like good value. For the record, the Sonata undercuts the top-shelf 2020 Honda Accord Hybrid Touring, with its 48 mpg combined rating, by about $1,000.

It’s hard to go wrong in this ultra-competitive segment and indeed Hyundai’s latest does a lot of things right. It drives well, offers all the tech, delivers great economy and manages to looks fantastic while doing it. The 2020 Sonata Hybrid Limited is a superb choice and about as close to compromise- and guilt-free motoring as you’re going to get these days.