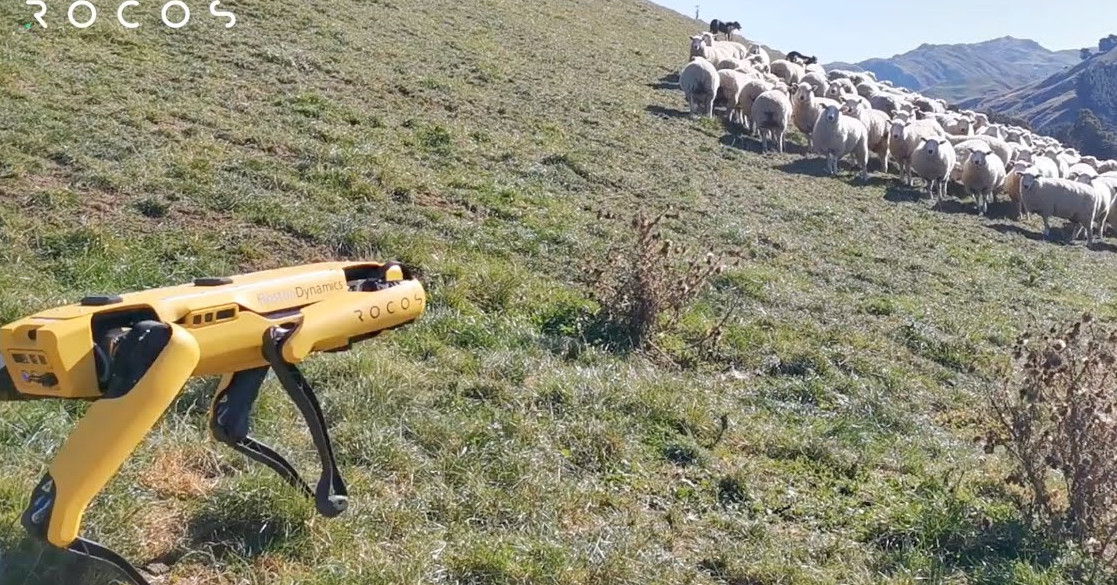 It’s certainly an arresting image: a four-legged robot trots across a grassy hillside, steering a herd of sheep without a human in sight. The apparently seamless fusion of the futuristic and the agrarian feels refreshing — even hopeful — at a time when so much progress relies upon the destruction of the natural world.

But is it realistic? Could a robot actually take on the job of a sheepdog?

The footage comes from New Zealand firm Rocos, which announced a partnership this week with Boston Dynamics, maker of the four-legged Spot robot that stars in the video (and many others). Rocos makes software to control robots remotely, and the video demonstrates one potential use-case: agriculture.

“Equipped with payloads like heat, LIDAR, gas and high resolution camera sensors, Spot navigates rugged environments to capture data in real time,” says the company in a blog post. “In agriculture, farmers can access information such as more accurate and up-to-date yield estimates. This provides access to a new category of automation, and a safer, more efficient business.”

Now, it’s clear that the video is mostly a fun teaser rather than a serious claim by Rocos (or Boston Dynamics) that robots will soon be replacing sheepdogs. But it does invite a tantalizing question: if that did happen, how well would the robots fare? It’s not like the danger of biting off more than you can chew has deterred tech companies in the past.

Terrible, is the answer of a man who should know: sheep farmer and author James Rebanks, whose 2015 autobiographical book describes life as a shepherd in England’s Lake District.

“No one who works with sheep needs or wants this.”

“The robot might be an amazing tool for lots of things but it is worthless and unwanted as a sheepdog,” Rebanks told The Verge. “No one who works with sheep needs or wants this — it is a fantasy.”

Rebanks says robots simply don’t have the motor skills or the intelligence needed for such demanding work, and they likely won’t for a long time to come.

“Moving sheep isn’t just being behind them, it is about doing whatever the controller asks, and sometimes what needs doing based on [the dog’s] own intelligence beyond the handlers control,” he says. “A shift to the left or right of a few inches can turn the sheep, and a great dog can judge their characters and how much to do or not do.”

This relationship between sheep and dog — the dynamic of two intelligent beings — is vital, says Rebanks, and it’s rooted in the evolutionary history of predator and prey.

“The sheep respond as they do because they evolved with wolves and being hunted.”

“Sheep obey based on carefully judged finely tuned movements, and because of the eye of the dog that intimidates them, and because the dog can ultimately enforce discipline with its teeth,” he says, adding that this “isn’t a good thing or needed often” but a valid threat. “The sheep respond as they do because they evolved with wolves and being hunted.”

He adds that, in the Rocos video, it’s clear that the sheep aren’t really obeying the robot at all. “If you watch carefully the sheep are breaking and taking the piss out of it — within a week they would be laughing at it,” he says. “Sheep have intelligence and will quickly work it out and completely disrespect it.”

Of course, criticizing the video might seem a little unsporting, given neither Rocos nor Boston Dynamics is selling its wares as sheepdog replacements. But the video represents a specific vision of the agricultural future that is incredibly popular right now. Farm automation is a fast-growing business, and companies are developing a range of technologies for it, from robot cricket farms to automated hydroponics.

But how far should we be mechanizing our food, especially if that food is an intelligent being in its own right?

Rebanks is skeptical to the extreme. Farming by robots and drones won’t make food production more sustainable or eco-friendly, he says, but it will instead exacerbate current problems with our food supply system.

“The most productive and sustainable [agriculture] on earth is labour intensive — more people, more contact,” he says. But the push for robots is “part of a relentless drive to de-skill, mechanize and simplify farm work to take people out of the fields — the exact opposite of what our society needs.”

To illustrate the problems, he points to a recent essay in The New York Review of Books, which describes how COVID-19 has exposed the flaws of America’s highly efficient but incredibly fragile meat industry. “The rush to embrace efficiency generating technologies has trashed the Midwest,” he says. “A battery operated sheepdog is the least of our worries.”

At the end of the day, says Rebanks, the sheepdog is a proven solution to an unusual problem, the “ultimate technology for this job,” he says. They’re bred, trained, and sold by people who respect their work; they don’t need fossil fuels to run; and, importantly, they are “a friend and companion to their shepherds.” Who could ask for more?