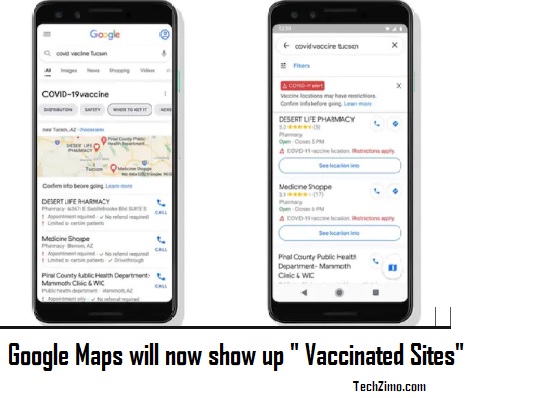 Google is rolling out a new feature on Google Maps. Users will able to get information about vaccination sites near them.

Google has come out with the new feature on Google Maps. Now, Google Maps and Search will give users more information about vaccination sites near them. This feature is rolled out for the United States currently.

Firstly, the feature will be rolled out in Arizona, Louisiana, Mississippi, and Texas. Google will roll out this feature for the rest of the countries later.

We tell you that Google, in October 2020, rolled out a feature that enables users to see containment zones on Google Maps. This makes traveling more convenient for users.

Google noted that searches for “vaccines near me” many times from the beginning of the year. So, Google decided to roll out this feature.

Google CEO Sundar Pichai in a blog post state that:

“We recognize that getting vaccines to people is a complex problem to solve, and we’re committed to doing our part. Today we’re announcing that we’re providing more than $150 million to promote vaccine education and equitable distribution and making it easier to find locally relevant information, including when and where to get the vaccine. We’ll also be opening up Google spaces to serve as vaccination sites as needed,”

“We’ll include details like whether an appointment or referral is required, if access is limited to specific groups, or if it has a drive-through,” Pichai noted.

Google said it is working with authoritative sources including government agencies and retail pharmacies for the information. It also noted that it is working on making select Google facilities such as buildings, parking lots, and open spaces, available for vaccination sites.

Also read: Google Search on Mobile to get redesigned

Also read: YouTube is Now Available to Be Installed as a Progressive Web App