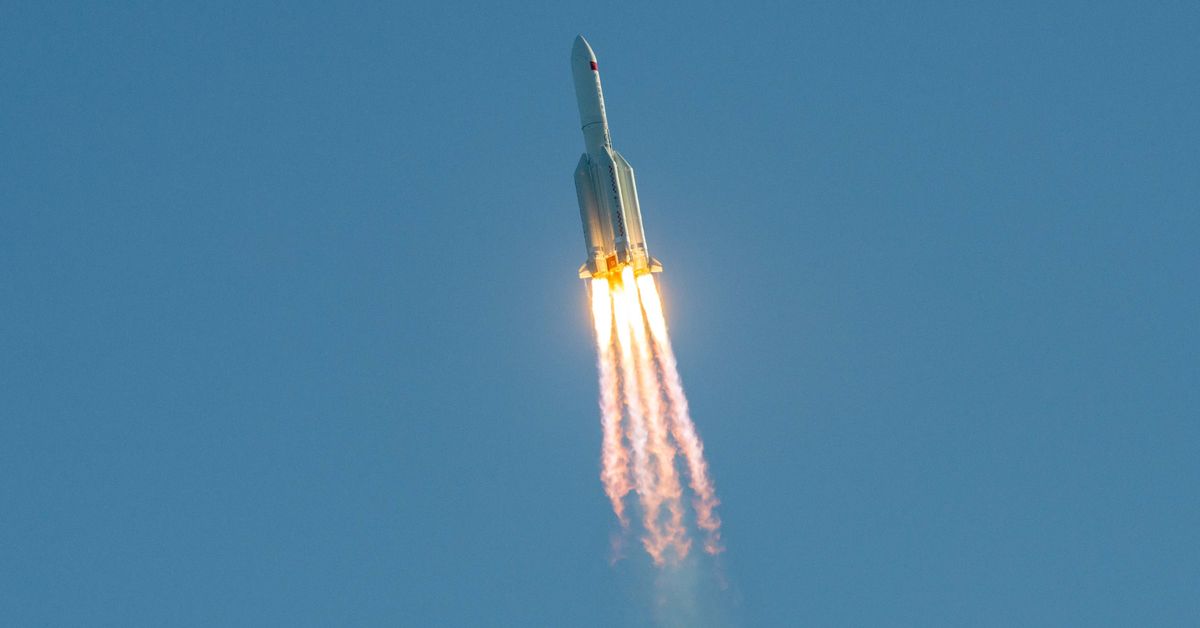 On Monday, a massive, out-of-control Chinese rocket fell out of the sky off the west coast of Africa, becoming one of the largest human-made objects ever to make an uncontrolled descent to Earth from space. At first, the rocket seemed to harmlessly slam into the Atlantic Ocean. But now it seems that some pieces of debris may have hit solid ground, according to local reports from Côte d’Ivoire describing metallic objects that apparently fell from the sky.

The rocket that just made a chaotic return to Earth was the core of China’s powerful Long March 5B rocket, which launched on May 5th. The mission marked the first time China had launched this particular rocket variant to space. Ultimately, the mission was a success, allowing China to test this massive new vehicle and put an experimental new spacecraft into orbit.

the Long March 5B is a truly massive rocket

However, once the launch was over, the core of the Long March 5B didn’t fall back to Earth, as most rocket cores do once they’ve completed a mission. Instead, the core made it into a very low orbit and stayed in space for the last week. Its orbit was pretty unstable, though, and it was predicted to fall to Earth early this week.

The whole ordeal was a tad scary since the Long March 5B is a truly massive rocket. When smaller-sized vehicles fall out of orbit, they will usually completely burn up in Earth’s atmosphere. But more massive objects like this rocket have a higher chance of partially surviving reentry. Normally, if a country or company puts a particularly heavy object into orbit like this one, they have a detailed plan in place for how to bring the thing down safely. China hasn’t been clear about its plans for the rocket.

The reported debris fall at Mahounou is near the town of Bocanda, which as you can see on this image is right on the projected ground track of the CZ-5B. pic.twitter.com/a0HVRlRKCn

“Did they perhaps have a plan to de-orbit it that went wrong?” Jonathan McDowell, an astrophysicist at Harvard and satellite tracker, tells The Verge. “The Chinese have not discussed whether they had any plan of the sort, so therefore we’re forced to assume that they didn’t.” China also doesn’t have a very good track record of making sure its rockets don’t hurt people. Rather than launch over the ocean as the US does, China will often launch its rockets over land, prompting reports of rocket parts falling over populated areas.

At 21 metric tons, the core of the Long March 5B is way more massive than the 8-metric-ton Chinese space station Tiangong-1 that careened to Earth in 2018. In fact, the Long March 5B is the fifth most massive object to make an uncontrolled descent to Earth, according to McDowell. “This is the heaviest object to make an uncontrolled reentry since 1991,” he claims.

“This is the heaviest object to make an uncontrolled reentry since 1991.”

Adding to experts’ worries, the Long March 5B core took a rare and unexpected path over heavily populated areas on Earth during its final orbit. McDowell notes that the vehicle passed over both Los Angeles and New York City just before it entered the atmosphere over the Atlantic.

The Air Force’s 18th Space Control Squadron, which is responsible for tracking space objects, confirmed that the rocket reentered over the Atlantic at 11:33AM ET on Monday. Still, it looks like some parts of the falling rocket may have escaped the watery grave.

Pictures from Facebook and Twitter show what looks like a long metal pipe found by villagers in Mahounou in Côte d’Ivoire. There are no indications that anyone was hurt. There’s also no solid confirmation that the pipe came from the rocket. But after doing some sleuthing, McDowell says that locals reported loud sonic booms, flashes, and falling debris around the same time that the rocket would have passed over them. Plus, the village is right in line with the rocket’s path around Earth, so he says it’s possible some pieces made it inland.

Reports of a 12-m-long object crashing into the village of Mahounou in Cote d’Ivoire. It’s directly on the CZ-5B reentry track, 2100 km downrange from the Space-Track reentry location. Possible that part of the stage could have sliced through the atmo that far (photo: Aminata24) pic.twitter.com/yMuyMFLfsv

“When you have a big chunk of metal screaming through the upper atmosphere in a particular direction at a particular time, and you get reports of things falling out of the sky at that location, at that time, it’s not a big leap to connect them,” he says.

“They’re planning a lot of launches of this thing.”

Of course, it’s still very early, and it’s unclear exactly what can be done about this if the pieces are, indeed, from the Long March 5B. The United Nations has a treaty known as the Space Liability Convention, an agreement about who is held internationally liable if a falling space object injures someone or harms a place on Earth. The UN came up with the treaty in 1972 after a Soviet satellite crashed into Canada. China acceded to the treaty in 1988, but Côte d’Ivoire isn’t part of it. So even if the pieces are from the rocket, it’s unclear if China will have to pay up in some way.

Either way, space trackers aren’t pleased, and McDowell worries about what this means for the future. “They’re planning a lot of launches of this thing to assemble their new space station, and so that’s going to be a lot of these objects reentering a few days after launch,” says McDowell. “And that’s not good.”