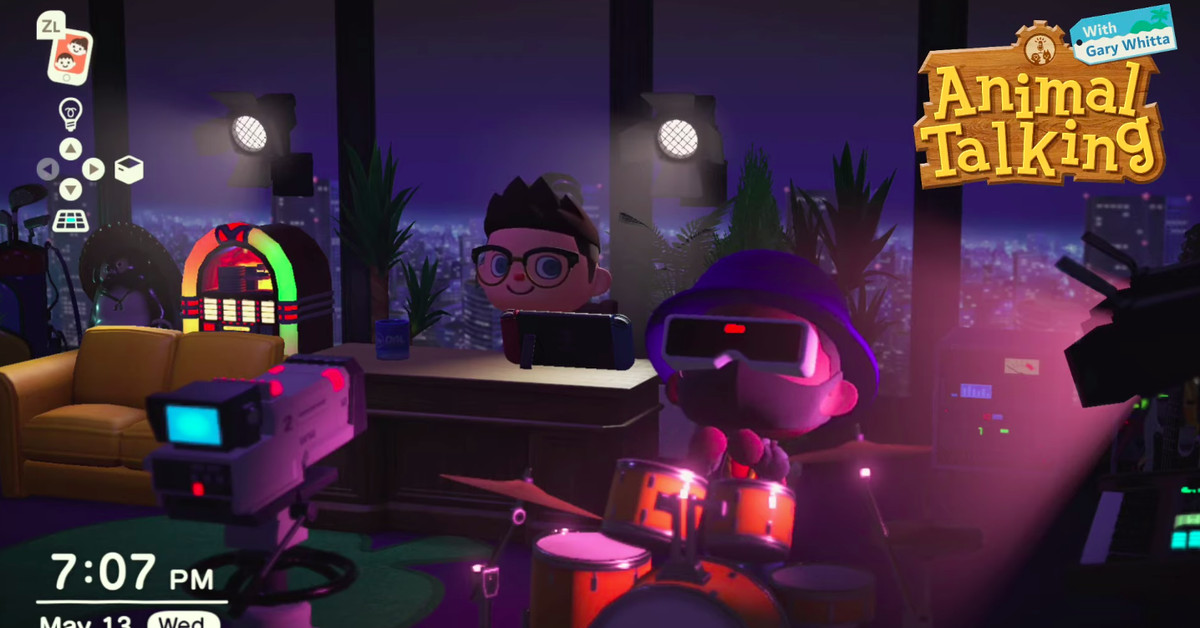 Gary Whitta is seated behind a thick wooden desk, hair perfectly coiffed, wearing a suit and a smile that curls upward like a macaroni noodle. He’s halfway through introducing his next guest, Greg Miller, when a beachball-sized head bobs into view. Whitta starts to yell. “Greg! I — goddamn you. Get back up the stairs. What is he doing?” Bandleader and video editor Adam Nickerson giggles behind his drumset.

Miller has blown his cue and arrived onstage too early. While the beleaguered host declares, “This is not what I wanted,” Miller plants himself in the center of the set and strikes a thoughtful pose. He’s typing. After several seconds, a small bubble appears above his head with his long-awaited message: “y chat yell at me.”

Perhaps you know Whitta as a writer for Rogue One: A Star Wars Story or The Book of Eli; maybe it’s as the former editor-in-chief of PC Gamer a lifetime ago. Today, he’s hosting Animal Talking in his spare time, a live late-night-style talk show that takes place entirely in Animal Crossing: New Horizons. The misunderstanding, now morphed into an impromptu gag, continues a little longer as Miller wanders aimlessly, is nearly herded away, and speaks directly into an on-screen camera before he heads back upstairs to retry a proper entrance.

On any other talk show, it would be an agonizing minute and a half of mistakes. Here, it’s what makes Animal Talking so special. Well, that and the fact that a pandemic has fundamentally changed how late-night shows operate. Whitta, safely tucked away in his virtual dollhouse, has created entertainment pros like Stephen Colbert, Jimmy Kimmel, and Jimmy Fallon cannot: a live set, complete with musical guests, comedians, and personalities, gathered in one room.

In just a few weeks, Animal Talking has grown from Whitta and some pals goofing off in the basement of his in-game house to an affair featuring celebrities like T-Pain. “People come to me and say, ‘Oh this is just like a real talk show,’” Whitta tells The Verge. “And I don’t want to sound annoyed or anything … but this is not ‘like’ a real talk show. It’s a real talk show. We do everything that the big boys do.” More than that, he adds, “We can do things right now that the big boys can’t do.”

As the pandemic forced everyone inside, entertainment fought to adapt. Hosts like Kimmel and Colbert record from their homes, rather than their studios. Saturday Night Live continues on with Zoom skits. Performers do their best to work together from a government-mandated distance, and the results aren’t always successful. That’s where Animal Talking has the advantage. “We have this amazing ability to bring people together from all over the world and put them in a virtual space,” Whitta says. “We’re literally the only people right now that have a late night talk show that actually looks like a late night talk show … not even Jimmy Fallon can do that right now, because he lives in the real world and I don’t. I live in an online world where we can do anything.”

Whitta and his cohorts — EP and avatar puppeteer Leah Whitta (also his wife), Nickerson, and a few volunteers here and there — are putting in the work. Asked how much time they dedicate to a single show, Whitta responds “way too much.” Once they’d created the set in New Horizons (a task that players know requires millions of bells, house expansions, and a meticulous scouting for just the right items), they still had to work out how to best stream it all, hit flattering camera angles, book and prepare guests, and so much more. There are game-specific quirks like the inability to move or alter the set once a guest is on-island; Animal Crossing’s camera has its limits.

“In order for me to have an angle on the mic where the musical performer performs, I can’t sit behind my desk because it’s too far away,” Whitta says, explaining one trick they learned to properly focus on a performer. The set is full of tributes, including a nod to Zach Galifianakis’ Between Two Ferns. But they also have a functional purpose. “I have to hide behind one of the ferns and when I turn the lights down, if I angle the camera a certain way, I have a perfect angle on the musical performer but you cannot see me, because I’m kind of lurking behind this fern.”

“I’m kind of lurking behind this fern.”

Any time a guest is booked for the show, Whitta and his team have to make sure they’re ready. Do they have a copy of New Horizons? Are they set up with equipment to properly chat for a soundcheck? Will they control their own character and pick a wardrobe, or will Leah puppeteer a customized character for the occasion? “We basically learned how to make a late night talk show in two weeks by building the airplane while it was in the air,” he says.

Stars Danny Trejo, Elijah Wood, and Greg Grunberg are slated for the show when it streams at 10PM ET this evening. It’s the biggest episode they’ve had to date. Whitta has already pre-interviewed Trejo and Wood, and each is a seasoned Animal Crossing player. “And they’re professionals who have done all kinds [of appearances], they’re actors, they know how to hit a mark,” he adds. Their preparation talk is brief, covering what they might want or not want to cover. “This is supposed to be a late night talk show,” he says. “We’re never going to do hard hitting, penetrating interviews on this show … It’s meant to be very fluffy.”

That strategy is working. The show is booked solid through the end of May. “I can’t say anything, but if I told you some of the guests we have coming on, you literally would not believe me,” he says. “It’s unbelievable.” Everyone else who might want to participate has to wait until June 1st to even ask. Is there anyone he’d make an exception for? “Maybe Obama,” he quips.

(Figures Whitta has publicly courted include Rep. Alexandria Ocasio-Cortez. Asked about the possibility of an AOC appearance, Whitta says that he’s currently in talks with people in her press office. “She wants to do it. I want her to do it. We are working on dates. And I can’t tell you anything more than that, but if you ask me right now, I think she’s gonna do it.”)

Still, even more are trying to pile in. “I’ve got major record labels and publicists calling me trying to get their guests on the show,” Whitta says. He’s had offers from corporate sponsors but continues to decline. It’s a hobby, he repeats, and he wants to keep it that way. “As soon as this becomes Welcome to Animal Talking, brought to you by Kellogg’s Cornflakes, I feel like we’ve lost something.”

The allure of Animal Talking is its goofy escape from the real world. There is no coronavirus in Animal Crossing, only cute villagers and capitalism for babies. “People are miserable right now,” Whitta says. “The game, the show itself, it’s wholesome, it’s silly, it’s fun, it’s whimsical.” New Horizons was already a gentle way to pass the time. Now, it’s a vehicle for the kind of entertainment we took for granted.