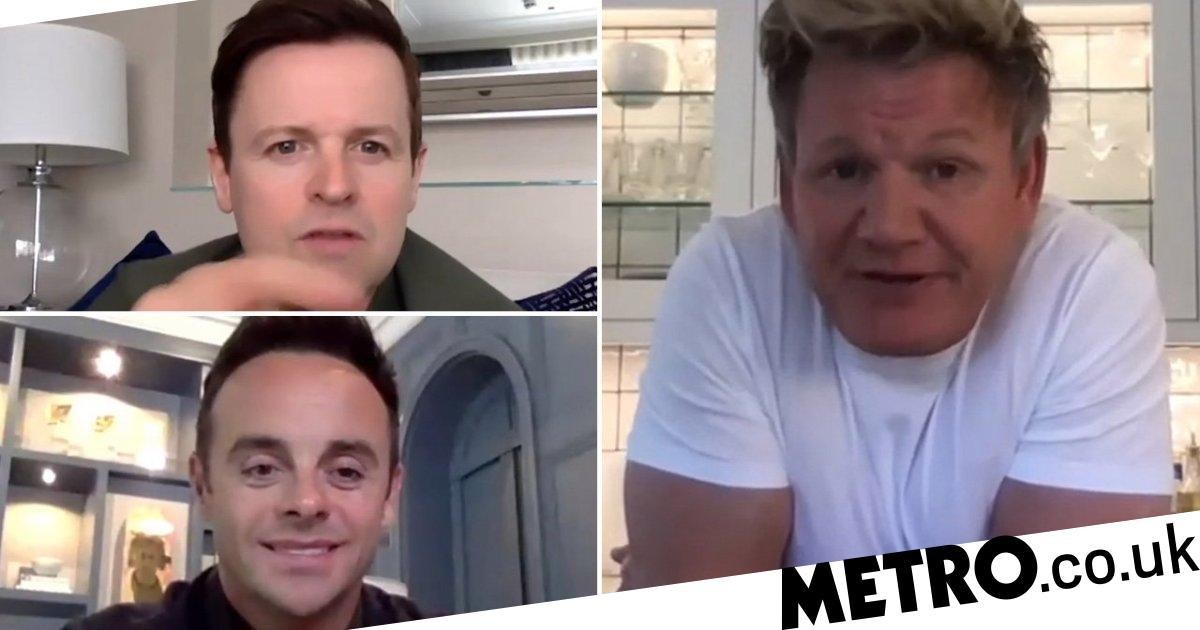 Comedy duo Ant and Dec have teamed up with Gordon Ramsay to lead mental health campaign Britain Get Talking.

On Monday night, TV’s landmark mental wellness campaign, will bring together some of the nations most loved celebs in a video call, where they will reinforce the importance of staying connected during these uncertain times.

‘It’s incredible that as a result of the campaign more than 6 million people have got in touch with someone so far.’

Dec added: ‘So for this Mental Health Awareness Week, we’re stepping it up another notch and asking people to reach out beyond their immediate family and close friends. Who could you reach out to who might really appreciate it? Britain, let’s keep talking.’

Covid-19 is one of the most challenging times our nation has faced in recent history and its effect on our mental health is and will continue to be hugely significant.

Through the video chat, ITV will continue to spread the vital message of looking out for one another, encouraging everyone to keep talking in this new campaign.

The initiative, which launches at the start of Mental Health Awareness Week, sees a series of famous faces joining forces in urging the public to not just talk to their nearest and dearest, but also reach out to people not expecting your call.

The celebs in the clip can be heard saying: ‘The elderly uncle or aunty who’s self-isolating, the quiet guy at work you see from time to time, the old friend you’ve somehow lost touch with or those who live alone.’

The poignant message will also invite viewers to remember them, reach out and let them know you care.

The film will debut on ITV and STV in the ad break for Harry’s Heroes: Euro Having A Laugh just before 9pm and is supported by charities Mind and YoungMinds.

MORE: I’m A Celebrity contestants ‘will fly out early and quarantine for two weeks’ before filming begins

MORE: Britain’s Got Talent unseen clip: Ant and Dec pull a hilarious prank on Amanda Holden by sending her bananas