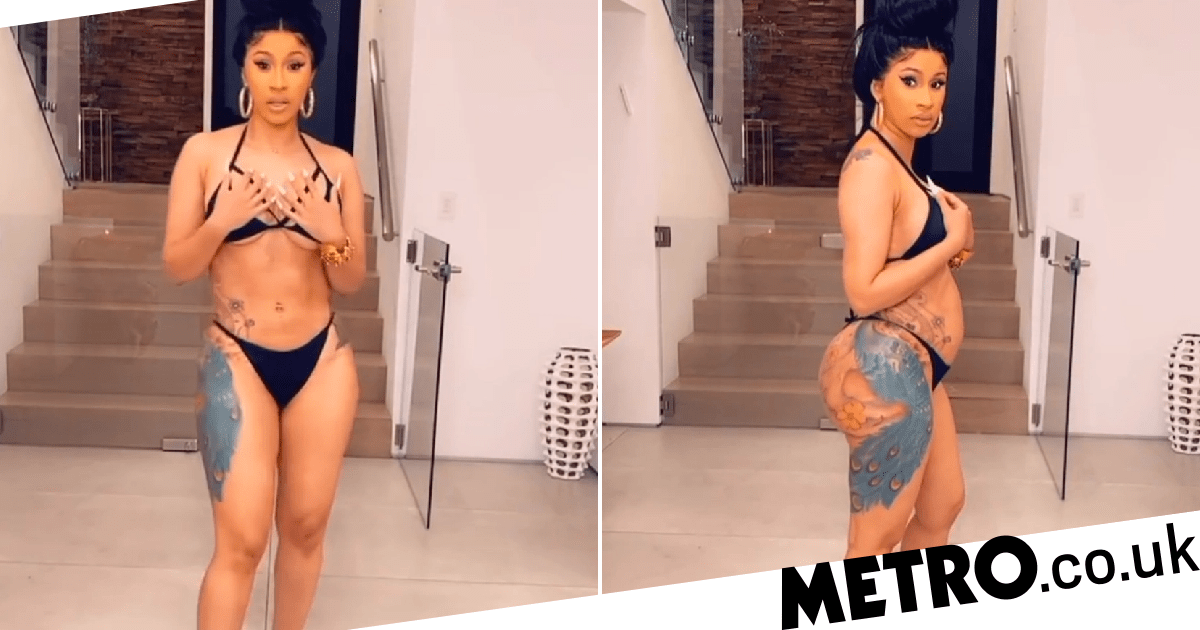 Cardi B gave fans the best of both worlds after sharing a snatched bikini photo – before breathing out to show the real size of her stomach.

The Bodak Yellow rapper is currently having a whale of a time in self-isolation with husband Offset, their daughter Kulture and other family members at their large home in Atlanta, Georgia.

And while many of us have reached the point of lockdown where we’re starting to not recognise ourselves, Cardi B has made us feel a whole lot better by removing the smoke and mirrors.

In one photo, the 27-year-old rapper is seen bikini-clad and posing on a sun lounger submerged in a swimming pool.

‘I suck the s**t out my stomach for this pic so appreciated,’ she told her 66 million Instagram followers.

But to give fans full transparency, Cardi then shared a video of herself strutting towards the camera before turning to the side and breathing out, showing her very normal stomach size.

It looks like Cardi is very unbothered about being dragged into Azealia Banks’ feud with Nicki Minaj.

212 rapper Azealia criticised Nicki for staying silent about the controversy involving her Say So collaborator Doja Cat, who is embroiled in a racism scandal.

Doja was accused of using what has been described as ‘racist incel’ chat rooms and while she regrets using them, she denies making racist comments.

Nicki, who has not publicly addressed the scandal, recently landed her first ever number one on the Billboard Hot 100 chart with her Doja collaboration.

And according to Azealia, the Starships rapper was just ‘jealous’ of Cardi’s success all along.

‘Another thing that I find f*****g funny, is Nicki… for all the f*****g mouth you have for Cardi B for talking s**t about black women, and now you quiet because you got your little number one with this white b***h,’ Azealia said in an Instagram rant.

She added: ‘Now I’m looking back at it, you were just jealous of Cardi… She’s got more swag than you. You made a whole radio show about how Cardi B is bad for black women.’

Perhaps Cardi will address it through her upcoming music. The I Like It rapper recently confirmed her new single is ‘coming very soon’ before joking that she’ll release when she ‘loses weight – never!’