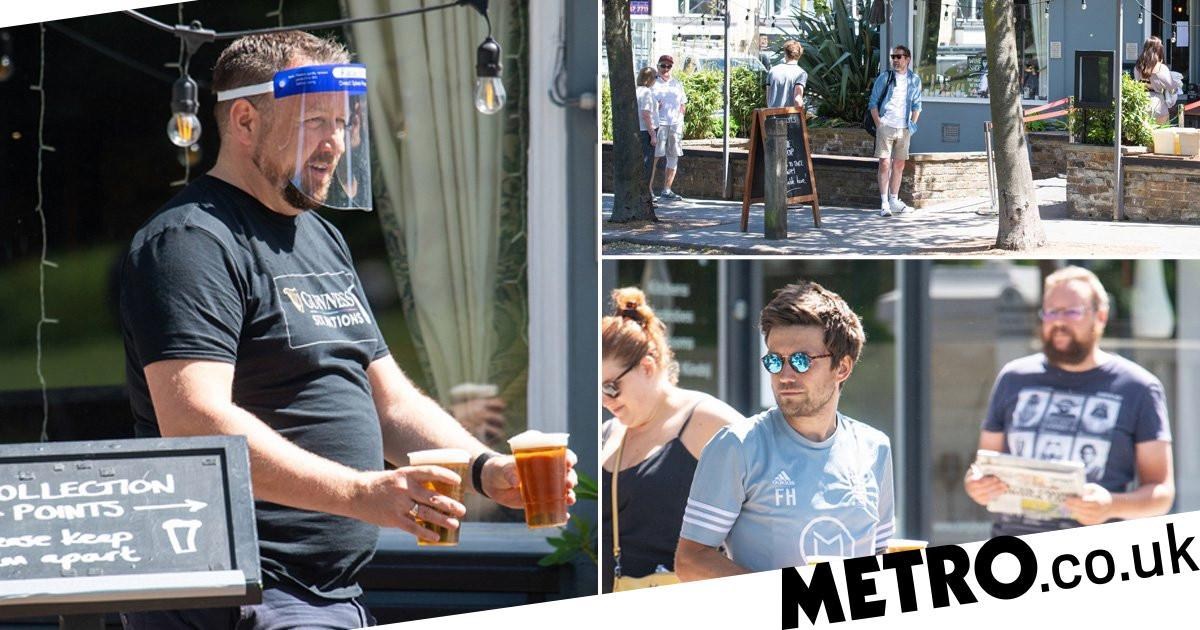 Britain’s boozers aren’t officially due to re-open until July at the earliest, but landlords have found ways to serve cold pints during the lockdown.

All bars, clubs and restaurants were ordered on March 20 to close for the foreseeable future as the Government tried to contain the spread of coronavirus. But as the weather is getting hotter and emergency measures are gradually eased, pubs have been serving drinks on the go for people to enjoy al fresco.

Staff at the Althorp pub, in Wandsworth, London, were seen wearing gloves and protective visors as they carried drinks on trays to thirsty putners. Customers took their drinks onto the nearby common as they soaked up the sun.

Visitors on Brighton beach were seen carrying beer in plastic cups as Britain was blessed with 28°C earlier this week. Among those taking advantage of this loophole was actor Laurence Fox, who was spotted sipping a pint in London’s Primrose Hill on Monday.

As people head to parks and beaches for a cold one with their pals, concerns have been raised about whether social distancing can be easily followed.

One drinker on Brighton’s seafront told ITV’s Good Morning Britain: ‘I know we’re down here drinking beer so it looks like we’re saying what’s good for us is not good for everyone else, but if we carry on the way we’re going I think we’re going to have a major lockdown in two weeks, the way that we let the restrictions up.

‘In two weeks I think we’re going to see a massive rise in the deaths again. ‘I think we should be more stricter like Spain and none of us be allowed out.’

Mayor of the London borough of Hackney Phil Glanville has concerns over the number of people gathering around the area’s Broadway Market, where a number of cafes and pubs are selling takeaways.

Last month he told the Hackney Gazette: ‘Police and council enforcement officers were deployed to the area on Sunday, and, from this weekend, we are proposing to suspend parking, close Broadway Market to through-traffic and deploy additional police and council officers to advise people and businesses to stick to the guidance.’

Industry body UK Hospitality has submitted a 75-page document to ministers, giving a first glimpse of what bars and restaurants could look like when they are officially allowed to open.

Proposals include condiments and cutlerly not being left on tables, menus being cleaned after every use, restrictions on customers hanging around the bar, socially distanced tape on the floor and an end to hotel buffets.