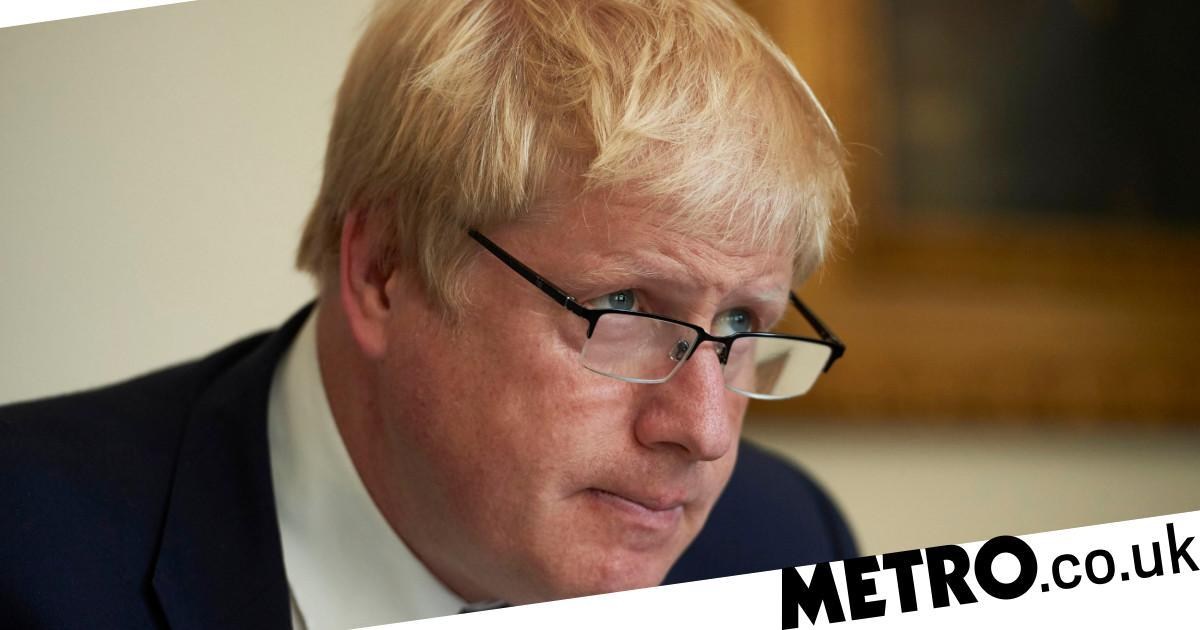 The controversy over Dominic Cummings’ car journey to his parents house in lockdown has continued to rage – with the Prime Minister’s chief aide explaining his actions in a statement on Monday.

As well as telling the press why he drove 260 miles to his parents’ house in Durham he was also forced to explain why he later made a car journey to nearby Barnard Castle – explaining that his wife Mary Wakefield had been concerned about his eyesight being good enough to drive that distance.

‘My wife was very worried, particularly given my eyesight had seemed to have been affected by the disease,’ Mr Cummings explained.

‘We agreed we should go for a short drive to see if I could drive safely.’

Mr Cummings isn’t the only one who has claimed coronavirus has had an impact on his vision, with Boris Johnson also saying yesterday that it had affected his eyesight too.

But is Covid-19 known to have an effect on people’s vision?

Does coronavirus affect your eyesight?

Although problems with eyesight have not been listed as an official symptom of coronavirus, there have been some documented cases of people’s vision being affected by the illness.

One case report from Italy at the start of the epidemic there suggested that Covid-19 can linger in the eyes long after it has cleared the nose, with the country’s first patient reported to have had virus particles in her eyes 27 days after she was first admitted to hospital.

The report, which was published in the Annals Of Internal Medicine, highlighted the importance of personal protective equipment, with eye mucus and tears listed as a possible source of infection.

It also warned that pink eye – aka conjunctivitis – could be an early sign of Covid-19, as the condition had developed before the patient’s other symptoms.

Doctors took swabs from the woman’s eyes and discovered she had genetic material from coronavirus – which lingered until the 21st day when her eye swabs were clear, only for it to return six days later.

Despite this pink eye is not listed as a possible symptom by the WHO or the NHS – but the Center for Disease Control in the US has recommended people avoid touching their mouth, nose or eyes to limit the spread of the disease.

With Dominic Cummings having claimed his vision was affected, Boris Johnson said soon after that the virus had affected his eyes – resulting in him having to wear glasses for the first time in years.

Speaking at Monday’s press briefing he said: ‘I’m finding that I have to wear spectacles for the first time in years – because I think of the likely effects of this thing – so I’m inclined to think there’s some … I think that’s very, very plausible that eyesight can be a problem associated with coronavirus.’

Space Force review: Netflix sees the funny(ish) side of the moon

In the social distancing age, this VR startup wants you to connect with others 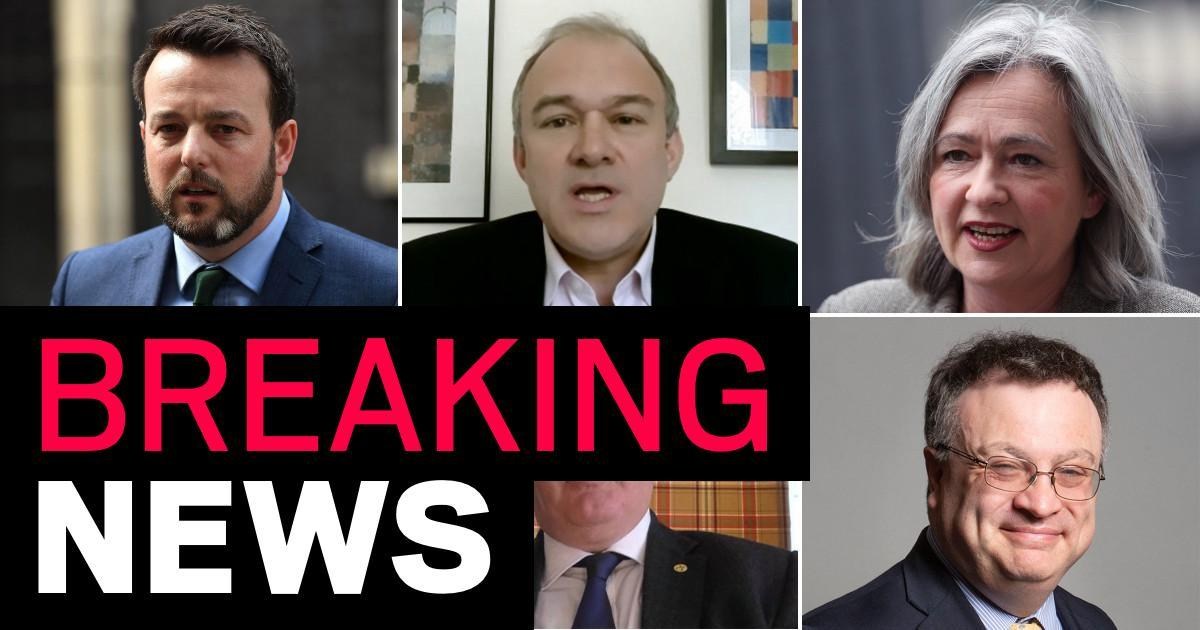 The leaders of six UK political parties have written to the Prime Minister demanding he sack his top adviser.

Boris Johnson has backed Dominic Cummings after it emerged he had driven 260 miles to his parents’ home in Durham during lockdown and then took a 60 mile round trip to Barnham Castle to ‘test his eyesight’.

The SNP, Liberal Democrats, Plaid Cymru, Social Democratic and Labour Party, the Green Party and the Alliance Party have all joined forces in calling for the PM’s right-hand-man to be removed from his post ‘without delay’. 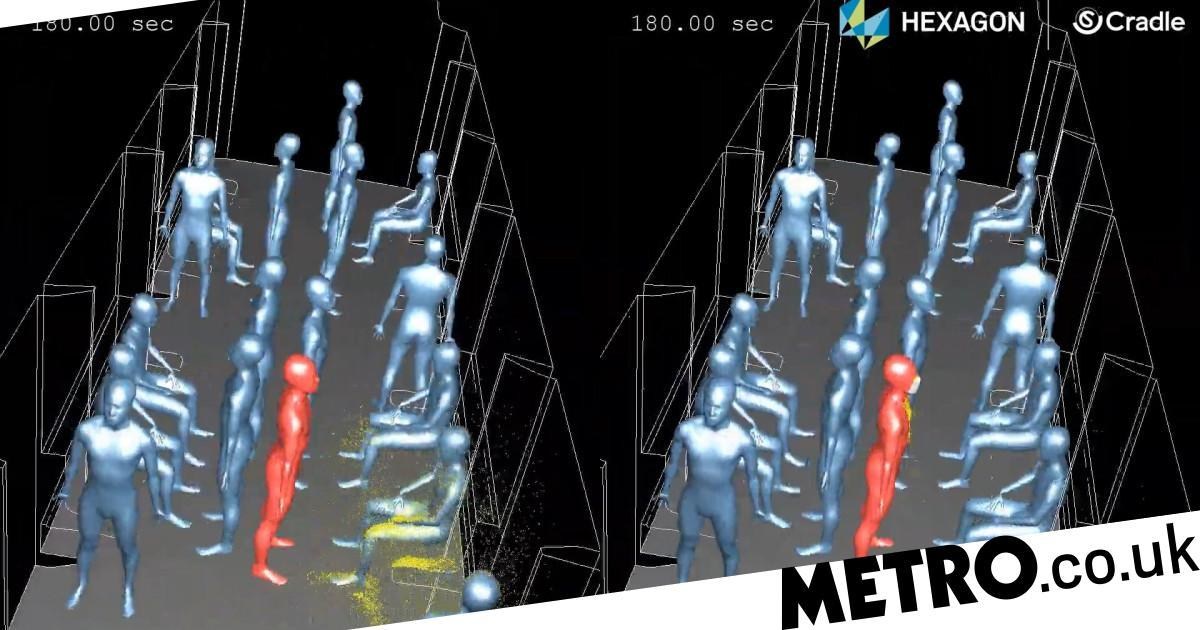 A horrifying video has revealed the reality of how a person infected with coronavirus could easily spread the disease on public transport.

The simulation, created by scientists at the University of Oregon, shows how an infected person talking to someone up close on the Tube or similar would cover them with the virus if there is a failure to social distance.

Although the droplets don’t travel as far as they would if you sneezed – around seven metres – they can still travel further than you would expect from just talking or breathing.

Respiratory scientist at the University of Leicester, Dr Julian Tang, said on BBC News: ‘If you are breathing and talking obviously droplets don’t travel as far, but they can travel far enough to affect your friend sitting opposite you, or someone who’s chatting to you.

‘That’s the key distance. How far do [the infected droplets] have to travel to infect someone else?’

The infected droplets could then be carried further through surface-to-surface transmission.

Scientists say this is why it is still important to wash hands regularly and wear face coverings in such environments to stop the spread of the virus.

It comes as people in England prepare to return to work on Monday as schools start to reopen to some children.

Prime Minister Boris Johnson confirmed at the daily press briefing on Sunday evening Reception, Year One and Year Six will be the first to return.

He said: ‘I do believe we will be in a position to move to Step Two of our plan.

‘As part of Step Two we set out plans for a phased reopening of schools because the education of our children is crucial for their welfare, their health, for their longterm future and for social justice.

‘And so in line with the approach being taken in many other countries, we want to start getting our children back into the classroom in a way that is as manageable and as safe as possible.

‘So we said we would begin with early years settings and Reception, Year One and Year Six in primary schools.

‘And today I can announce that it is our intention to go ahead with that as planned on June 1.’

The PM confirmed some secondary school pupils would also have contact with schools from next month.

He added: ‘We then intend, from June 15, for secondary schools to provide some contact for Year 10 and Year 12 students to help them prepare for exams next year with up to a quarter of these students in at any point.

‘By opening schools to more pupils in this limited way we are taking a deliberately cautious approach.’

He said the decision to reopen schools on June 1 came after a ‘constructive period of consultation with schools, teachers and unions led by the education secretary Gavin Williamson.’ 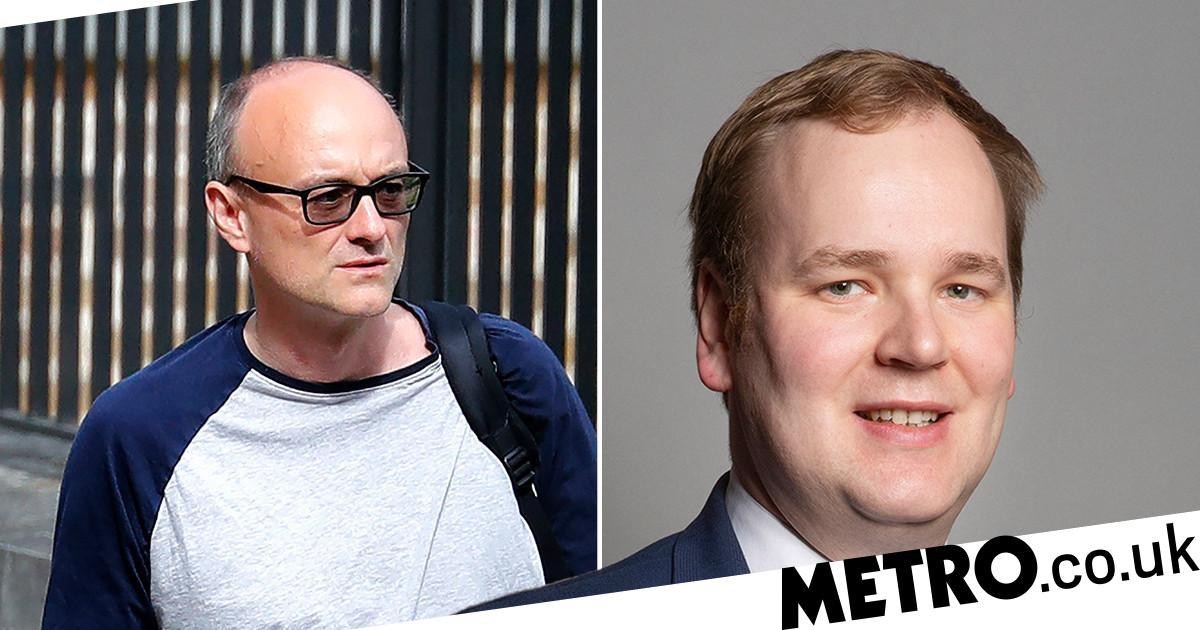 As more and more Conservative MPs speak out against Boris Johnson’s top aide – cabinet ministers are seeking to form a protective shield around him.

Yesterday Dominic Cummings held a press conference in an attempt to clear up his 260 mile trip to his parents’ home in Durham and 60 mile round trip to Barnard Castle to ‘test his eyesight’ despite coronavirus lockdown rules. He says he made the trip with his symptomatic wife and son to arrange childcare in case he also fell ill and that there were no options available to them in the capital.

The Prime Minister has stood by his adviser, reiterating that he acted ‘legally’ and ‘with integrity’ and Chancellor of the Duchy of Lancaster Michael Gove called Mr Cummings a ‘man of honour’ who acted in a ‘reasonable’ way.

But an increasing number of Tories are breaking rank, calling for the adviser to step down, or for Boris Johnson to sack him. Among those voices is chairman of the Commons Public Administration and Constitutional Affairs select committee William Wragg.

Today the MP for Hazel Grove tweeted: ‘We cannot throw away valuable public & political good will any longer. It’s humiliating & degrading to their office to see ministers put out agreed lines in defence of an advisor. This is a time of national emergency and our focus must be unrelenting. We owe it to the nation.’

It comes as junior minister Douglass Ross quit as Under Secretary of State for Scotland over the ongoing scandal. He said that he could not ‘in good faith’ tell his constituents who could not care for sick relatives or say goodbye to dying ones while obeying lockdown rules that Mr Cummings acted appropriately.

Mr Ross said Mr Cummings’ view on lockdown guidance was ‘not shared by the majority’ and that as a father himself, he would have stayed at home if he and his wife had contracted Covid-19.

Tory MP for Folkestone and Hythe Damian Collins said: ‘Dominic Cummings has a track record of believing that the rules don’t apply to him and treating the scrutiny that should come to anyone in a position of authority with contempt. The government would be better without him.’

Prominent Brexiteer and MP for Wellingborough Peter Bone said: ‘What I think is unforgivable is that Dominic Cummings didn’t resign.

‘And then he put the Prime Minister in a situation where it was either sack him or keep him and, in the past, an adviser in that situation would have no hesitation but to resign.

‘Behind the scenes, the vast, vast majority of Conservative MPs think Dominic Cummings should go.’

But the cabinet has appeared uniform in their defence of the PM’s top aide. On Saturday Chancellor Rishi Sunak said: ‘Taking care of your wife and young child is justifiable and reasonable, trying to score political points over it isn’t.’

Health Secretary Matt Hancock said: ‘I know how ill coronavirus makes you. It was entirely right for Dom Cummings to find childcare for his toddler, when both he and his wife were getting ill.’