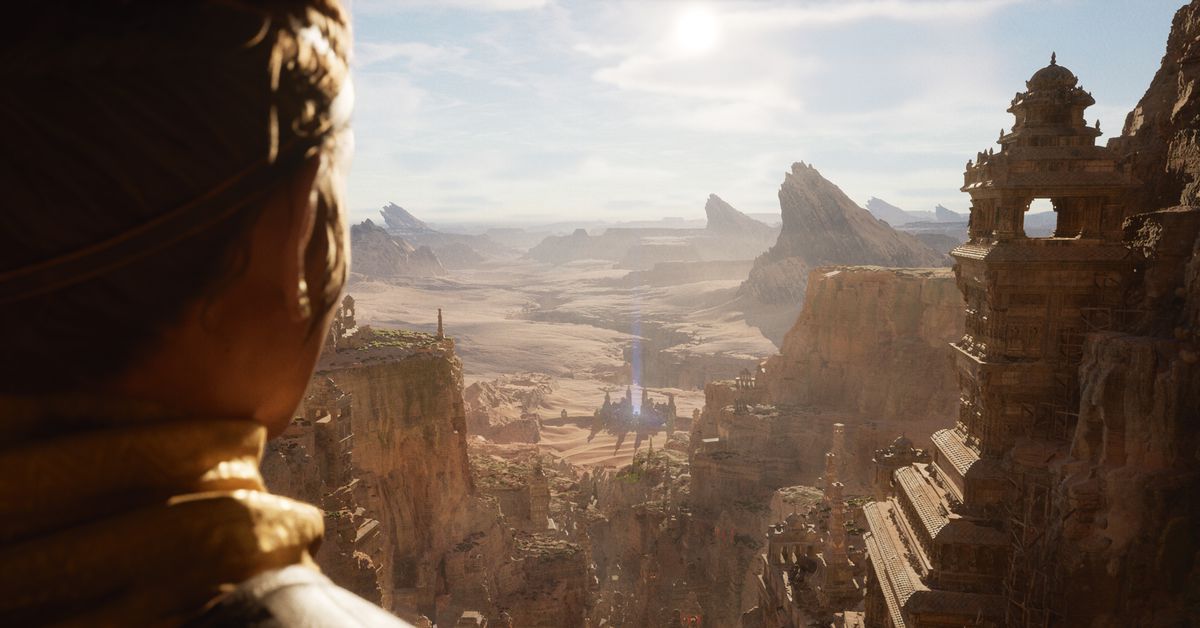 Epic Games today announced the next iteration of its game engine, the Unreal Engine 5 (UE5), with a stunning demo running on the PlayStation 5. Epic says the demo shows off what next-generation game consoles will truly be capable of once developers have full access to creative tools like UE5 and the capability to squeeze the maximum out of new hardware and software baked into Sony’s PS5 and Microsoft’s Xbox Series X.

“The graphics speak for themselves. And Epic has always pushed the bleeding edge of what’s possible,” CEO Tim Sweeney tells The Verge. “Our goal isn’t just to bring more features to developers. The hardest problem in game development right now is building high quality games takes enormous time and cost. So we want to make developers’ lives easier and more productive.”

“The next-gen consoles are going to give consumers a quantum leap, and UE5 is another leap on top of that.”

To show off UE5’s capabilities, Epic put together a demo running on a developer version of PS5 hardware and captured the output. The results showcase incredible visual quality, combined with the detail and photo-realistic lighting Epic promises its new tools will deliver. According to Kim Libreri, Epic’s chief technology officer, “the next-gen consoles are going to give consumers a quantum leap, and UE5 is another leap on top of that.”

Libreri says he’s fairly confident developers can achieve visuals like that within a full studio title, and not just hyper-optimized tech demos, using next-gen consoles and UE5. But he and Sweeney explain that it may take some time for the full scope of the hardware and software to be realized and for developers to become fluent in tool sets like UE5. Sweeney cites the launch of the Xbox 360 and the release nearly a year later of a game like Gears of War, which was a groundbreaking showcase for HD gaming at the time, as an example of how it may take a year or longer to see truly next-gen titles.

The immediate goal with UE5 early on will be to help developers start thinking of games as holistic products that can exist anywhere, from smartphones all the way to high-end gaming PCs. “Each generation introduces a new set of problems you don’t have to worry about. We’re trying to remove the content scalability content problem from this generation,” Sweeney says, with the intent of giving developers the freedom to think up new game ideas.

“You can build a high-end console game and it can look fantastic and you can also make it work on smartphones, and you can build an audience far bigger than just the hardcore gaming audience by shipping it on more platforms,” he adds, referencing Fortnite. “The technology can enable that and make it more productive.” With its full launch in late 2021, Epic says UE5 will support next-generation consoles, current-generation consoles, PC, Mac, iOS, and Android.

But for developers who do want to build games using the most up-to-date technology, UE5’s big advancements come in a pair of new development tools around graphical detail in objects and lighting, as well as a deep commitment from Epic to support next-gen game development. In fact, Sweeney says Epic has been working closely with Sony for years now on ensuring UE5 can best utilize the upcoming PlayStation’s unique architecture.

“Sony has really done an awesome job of architecting a great system.”

“Sony has really done an awesome job of architecting a great system,” Sweeney says. “The storage architecture on the PS5 is far ahead of anything you can buy on anything on PC for any amount of money right now. It’s going to help drive future PCs. They’re going to see this thing ship and say, ‘Oh wow, SSDs are going to need to catch up with this.’” The PS5, combined with tools like UE5, will enable “nothing but seamless, continuous worlds, and you can have this degree of fidelity going on for as many kilometers and gigabytes as you wish,” Sweeney adds.

Sweeney is referring to the PS5’s new ultra-fast M.2 solid-state drive, which Sony claims will have a drastic effect on how fast games load and how developers are able to manage the data of their game while it’s running on the hardware. The end result, in Sony’s words, are worlds that load almost instantaneously, freeing up developers to put resources toward maximizing visual quality and totally rethinking level design.

The pair of new technologies coming with UE5 are called Nanite and Lumen. Nanite is a tool that will virtualize geometry, which means it will automatically generate “as much geometric detail as the eye can see,” the company says in a blog post, and allow developers to diversify that geometry endlessly based on any source asset.

That way, “film-quality source art comprising hundreds of millions or billions of polygons can be imported directly into Unreal Engine — anything from ZBrush sculpts to photogrammetry scans to CAD data — and it just works,” the company explains. Epic says the tool handles data streams and scaling in real time without a loss in quality. For developers, this will translate to extremely high-detail environmental assets created with a much less time- and resource-intensive manual process.

Lumen is Epic’s new dynamic global illumination tool, and Epic says it will work in real time for game development the way advanced computer-generated graphics work for high-quality animation and film production. “Artists and designers can create more dynamic scenes using Lumen, for example, changing the sun angle for time of day, turning on a flashlight, or blowing a hole in the ceiling, and indirect lighting will adapt accordingly,” the company explains.

Epic says UE5 won’t release until next year, first as a preview earlier in the year and then as a full release late in 2021. But the company says developers working on titles using UE4 right now will be able to easily transition. “Epic is designing for forward compatibility, so developers can get started with next-gen development now in UE4 and move projects to UE5 when ready,” the company says.

Epic is also slightly adjusting the business model for its game engine. Starting in 2015, Epic shifted to a full royalty model, in which it gives out access to Unreal Engine for free but claims 5 percent of all royalties from sales generated by Unreal-powered titles after the first $3,000 in sales.

Epic says it’ll now let developers keep all royalties for the first $1 million in sales generated, in other words $50,000, and it will then take 5 percent of any sales after that. (The company waives all royalty fees for sales generated through its Steam competitor, the Epic Game Store.) Epic says the policy change is retroactive to January 1st, 2020, and it will be reaching out to developers to coordinate refunds in the event they launched a game using Unreal in the last four months.

Epic is also finally launching its Epic Online Services platform, the multi-platform and game management tool set it built specifically to operate Fortnite. Originally announced in late 2018, Epic Online Services takes all of that technology — specifically the cross-platform matchmaking and account management tech that lets Fortnite accounts move and play between mobile, console, and PC — and gives it out for free. It will operate as a single software development kit, and it’s available today for all major consoles, Mac, and PC, with mobile to come soon.

While we’re still a year out from games that will take full advantage of UE5, Sweeney says the long lead of games means Epic wants to give developers the resources to migrate projections if they’re able to do that, or to start thinking up new ideas to use the engine for if they’re already close to wrapping a project that won’t be able to use UE5 at launch. “Any game that is going to ship at [PS5’s and Xbox Series X’s] launch time has been in development for the last two years, probably three,” he says. “This is the lead-up and what’s necessary to get fully next-gen technology up and running.”