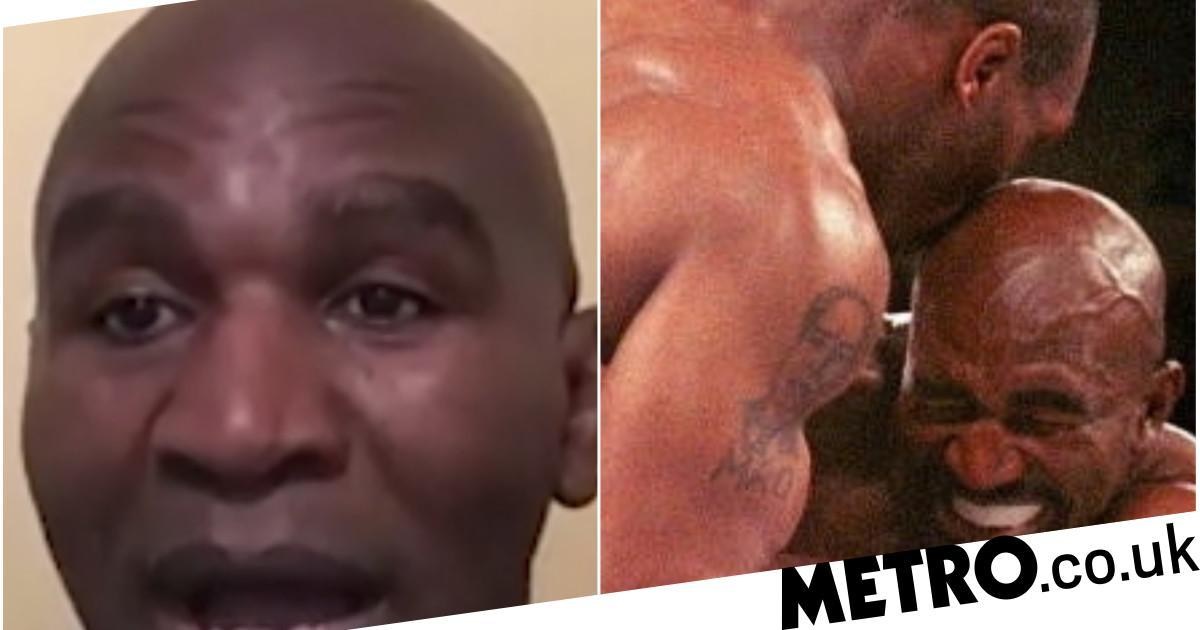 Evander Holyfield admits he was desperate to get revenge on Mike Tyson during the pair’s infamous 1997 fight but decided against biting Iron Mike because he feared the sport of Boxing would never recover.

Tyson was looking to win back his WBA Championship in 1997 after Holyfield had upset the odds in the pair’s previous encounter in Las Vegas eight months earlier.

However, though Holyfield retained the title after the second fight, it’s best known for one of the most bizarre scenes in sports history after Tyson bit off a portion of the 57-year-old’s ear.

Amazingly, after a brief stoppage, the match continued but was Tyson was disqualified when he bit Holyfield for a second time later in the third round.

Tyson claimed it was in retaliation to an earlier ‘headbutt’ from Holyfield but the referee determined that it was accidental.

The bite meant Holyfield retained his belt but the Alabama-born fighter has revealed he was desperate to get revenge on Tyson by biting him back after the first stoppage but decided against retaliation due to how poorly it would have reflected on the sport.

‘He bit me on my ear and it was just…it was something that you never thought would happen,’ Holyfield told Chris Mannix.

‘Nobody ever thinks somebody will bite their ear. Even when they showed the tape and how strong your neck is…we kinda get close to each other and it’s like I leaned my ear into his mouth [laughter].

‘He bit my ear man! I remember just how mad and upset I was. I realised that I was going to bite him back.

‘But though a part of me knew I wanted to bite him back my corner guy, Tim Hallmark, his papa had told us in the match : ‘This guy’s going to do something to you’ and for me not to lose my cool and all that.

‘I told my trainer Tim Hallmark to remind me if that does happen. He kept telling me: ‘Keep your mind on the Lord’ but I wanted to bite him back.

‘All of a sudden it came across my mind what my Grandmother said; ‘They always catch the person that do it the second time’ and so I decided not to bite him back and he bit me again!

‘Then we stop the fight and all that, but when all is said and done I did the right thing. I actually think it saved boxing.

‘I truly believe if I did what I wanted to do because I wanted to bite him right in the face like this [pints to cheek].

Tyson was fined $3m from his $30m purse for the fight and he was banned from boxing for 18 months.

Despite their troubles at the time, the pair are now friends having put their history behind them and there’s now the tantalising prospect of a fight between the two later this year.

Holyfield has been training again with a view to fighting Tyson in an exhibition match and the prospect of the clash has got tongues wagging in the boxing world.

However, the 53-year-old has stressed any rematch would have to be a chairty bout and be limited to three rounds with no decisions.

‘I don’t want pressure on me that ‘You just want to fight Mike because you know you can beat him,’” Holyfield said.

‘If he hits me I’m gonna hit you back, that’s what boxing is really about. I’m gonna be 58, he’ll be 54, you talk about being in good health and doing things the proper way that respects it.

‘Anybody that I get in the ring with, if I’m in there with my brother, if he tag me I’m gonna tag him back. If you don’t want me to throw bombs you’d better not throw no bombs.’

MORE: Evander Holyfield reveals what happened when he first sparred with a 17-year-old Mike Tyson