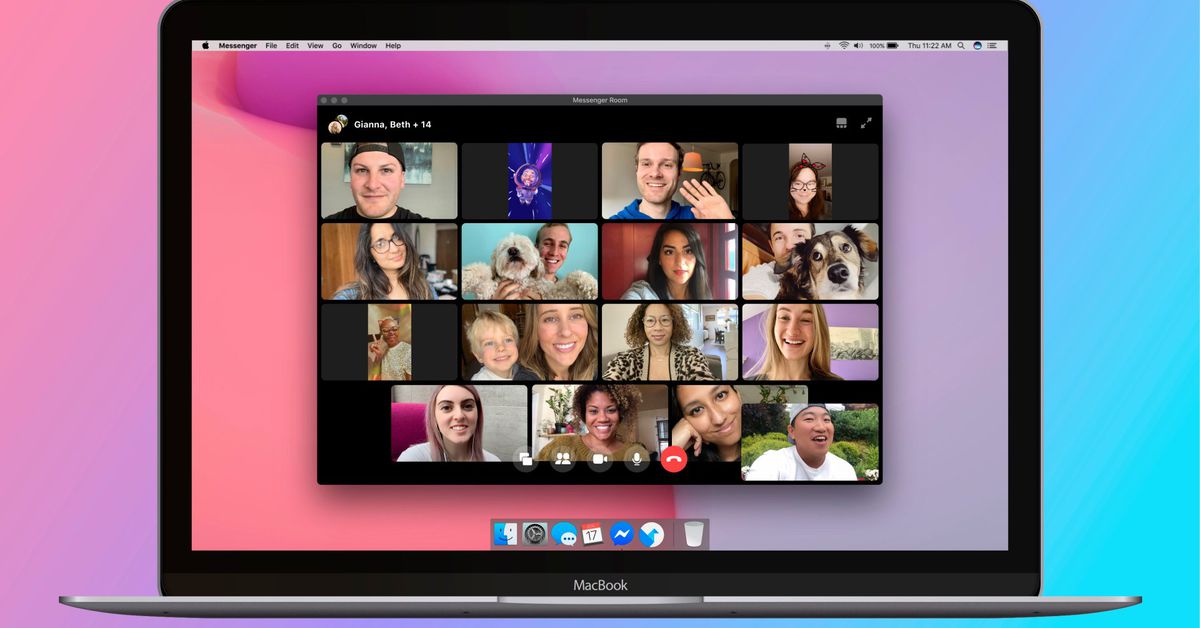 Facebook’s new video chat product, Messenger Rooms, is now available to everyone on both mobile and desktop, the company announced on Thursday. The product is a more feature-rich and expanded version of the existing Facebook Messenger’s video calling function, and it allows up to 50 people to chat on video with no time limit through either the main Facebook app or through the dedicated Messenger one.

Facebook says you can set limits on who can join, or you can make it public to anyone with the link even if they don’t have a Facebook account. “You can start and share rooms on Facebook through News Feed, Groups and Events, so it’s easy for you to drop by whenever you want,” writes Stan Chudnovsky, Facebook’s vice president of Messenger, in a blog post published today. “You can choose who can see and join your room or remove people from your room and lock the room if you don’t want anyone else to join.”

You can still use Messenger to perform one-on-one calls and video chats or group calls and group video chats just as you could before. But now, if you tap over to the “People” section of Messenger, you’ll have the option to create a room. From there, you can set parameters like the function of the room — “hanging out” or “happy hour,” among other choices, as well as a custom option — and who’s allowed in. You can do the same from the top of the Facebook News Feed in the main app.

You can choose to make the room available to any of your friends and anyone with whom you share the link or pick specific people on your friends list who will then get personal Messenger invites from you. If you decide to make it public to your entire friends list, it will show up at the top of the News Feed for your entire network, so beware of doing that on accident. And definitely be cautious about where you put the link.

Messenger Rooms is a powerful product, but beware of accidentally sharing your video chats far and wide

Facebook is promoting the new product in its main app with a carousel of cards at the top of the screen that lists various friends’ faces and the option to “Say Hi.” Tapping any one card will give you the option to create a room with that person or message them directly on Messenger. In my brief time experimenting with the live product, I found it somewhat confusing, albeit powerful from a technical standpoint.

The quality is solid, and there are some great added features like AR filters and virtual backgrounds. So I can see the potential here, but I’m also wary of leaving my room open without ending it, which you have to do manually, or accidentally opening up a group video chat with more than 500 people, many of whom I don’t interact with at all anymore.

For Facebook’s broader business, Messenger Rooms is an opportunity for it to reposition its messaging products as more familiar and well-polished versions of popular video chat alternatives. Facebook says it does not end-to-end encrypt the calls, as it does on WhatsApp, but it says it will not view or listen to calls, just as it doesn’t do on Messenger. The company is also advising users to report rooms where illicit behavior is taking place.

So far, teleconferencing app Zoom has led the charge in taking the place of social hangouts during the COVID-19 pandemic, despite its myriad privacy issues. But there’s also Houseparty, the Epic Games-owned app Facebook originally tried cloning with its ill-fated and now-defunct Bonfire competitor. And Google recently revamped its Hangouts Meet application for enterprise teleconferencing and turned it into Google Meet, a more consumer-friendly and currently free option tied to people’s Gmail accounts.