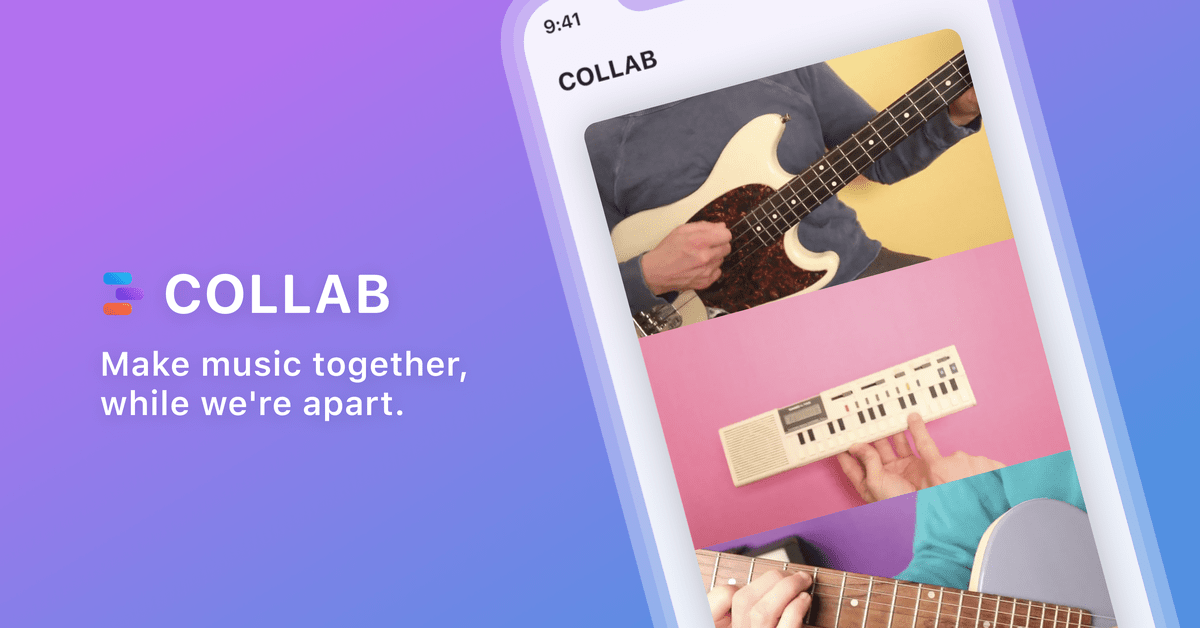 Facebook’s experimental app division has a new product out today called Collab that promises to deliver a new approach to collaborative music making. The app, launching as an invite-only beta on iOS, is from Facebook’s NPE division (short for new product experimentation). If it already in that brief description sounds like another swing at the cultural and creative juggernaut that is TikTok, that’s because it is.

Collab’s primary pitch is that you can create short-form videos split into three simultaneous sources, so you can perform a single song by playing three different instruments and stitching it all together. Or you and one or two other friends can collaborate together by each supplying one of three parts.

Here’s the real TikTok-style feature: these videos, for now, can only be posted publicly to the Collab feed, where any other user can use it to create a video of their own. Say you like one person’s guitar part, and another’s vocals. You can put your own beat over it with a virtual drum pad on your iPhone and make a whole new song. Facebook says you can’t remix the underlying music, and everyone whose parts are used in a new Collab post get properly credited. You also won’t be able to just use other people’s parts to create a new song — you’ll have to record something new to contribute yourself.

Facebook says you’ll still be able to share them to other platforms, like Instagram and TikTok, but only after they’re posted to Collab. There also won’t be a “save to camera roll” option for getting the videos off Collab, at least for now.

Facebook said it expedited the release of an in-progress version of Collab to give people a creative outlet during the pandemic, hence the invite-only beta. “Facebook’s New Product Experimentation team is launching an invite-only beta of Collab, an iOS app that brings together creators and fans to create, watch, and mix and match original videos, starting with music. Digital spaces can connect us when we can’t be together in person, and Collab is a new way to create together,” a company spokesperson tells The Verge.

The key words there in that statement are “starting with music.” This may be designed around music making and short-form music videos, but the entire point of the NPE division is to experiment and move quickly with new app ideas to see which might stick. If Collab proves successful in the music realm, it may grow organically as a powerful set of tools for other media formats, too. And Facebook doesn’t yet know what exactly a new community might do with the ability to use and remix content so freely.

The same was true of TikTok, which barreled toward mind-bending popularity in its earlier days thanks to near-identical features like react and duet, which allowed users to borrow others’ posts to react to or collaborate with, without needing permission. In fact, TikTok only became a massive, worldwide phenomenon by first starting as a Chinese lip-syncing platform and growing from there into a unique fusion of Instagram, Vine, and YouTube.

Facebook is experimenting to find a viable TikTok competitor

Thanks to its music licensing deals that ensure posts can sample brand new pop and hip-hop singles and its powerful recommendation algorithm, TikTok is now one of the most popular social media apps on the planet. It has its own fast-growing culture, newly-minted celebrities, and the attention of Hollywood’s elite — just last week, Disney’s head of streaming, Kevin Myers, resigned to take a job as TikTok’s new CEO. It’s clear this is the kind of global pop culture cachet, with the massive engagement metrics that come with it, Facebook wants for an app of its own.

Facebook has tried, and failed, to emulate TikTok in the past, most notably with the Reels editing feature on Instagram and the standalone app Lasso. The company also goes to great lengths to monitor up-and-coming startups that might steal its social thunder. For those reasons, Collab is as much a set of unique music-making tools as it is another stab at reclaiming the teenage cool factor every Facebook product, from the main app to Instagram, inevitably cedes to younger, more culturally savvy apps over time.

The company says you can sign up to try Collab here, and availability will start with iPhone owners in the US and Canada. But the NPE team has been working on the product for a few months, and the company says it already has creators using it to fill the feed with usable clips new users can draw from.