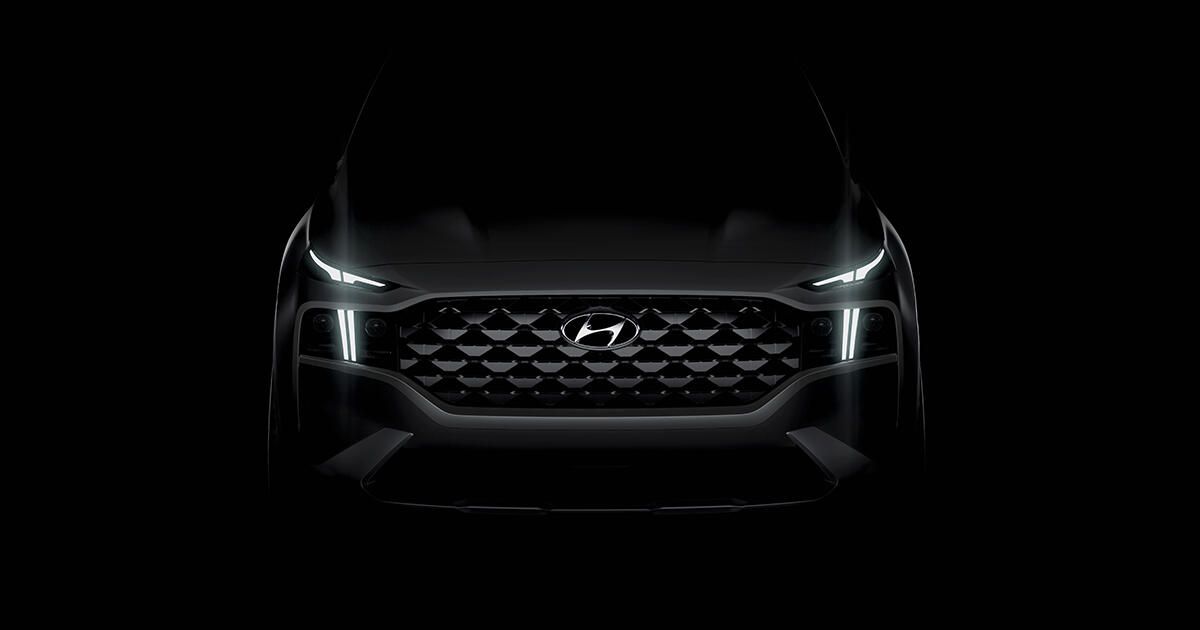 The current Hyundai Santa Fe has only been out since 2018, but a major facelift is already on the horizon. Hyundai has released two teasers showing the updated Santa Fe’s front end, with Hyundai saying the SUV will be revealed within the next few weeks.

From the shadowy teasers we can see that the Santa Fe will retain its distinctive split-headlight look, with thin LED running lights at the top and larger main units below. But the lower lights are now integrated with the grille, which is wider and more squared off. A T-shaped DRL light signature extends from the thin top lights down, a design cue that might make its way to other Hyundai models. The lower half of the front end is more sculpted than the current car’s, with larger intakes and more angular lines. The hood seems to be new as well.

Both teasers show the front end from the same angle, but they’re actually of two different versions of the Santa Fe. The image at the top of this story shows a “Luxury” model with a geometric grille consisting of trapezoidal elements, while the “Standard” model (shown above) has a grille pattern more similar to the current Santa Fe’s. Could the updated Santa Fe get some luxury features trickled down from the high-end Palisade? Let’s hope.

Hyundai says the facelifted Santa Fe will be available with hybrid and plug-in-hybrid powertrains, both of which are likely to come to the US. Most interestingly, Hyundai says the updated Santa Fe will ride on an “all-new third-generation vehicle platform” with an improved electrical architecture to allow for those hybrid models. You might think that’s unusual for just a facelift, and you’d be right — typically platform changes happen with full redesigns. But a Hyundai US spokesperson confirmed to me that the platform really will be new, and the Santa Fe will be the first SUV to use it.

The facelifted Santa Fe should go on sale in the US by the end of the year as a 2021 model. We’ll know more when the SUV gets revealed at some point in the next few weeks.

Fikayo Tomori reveals he nearly quit Chelsea as a youngster