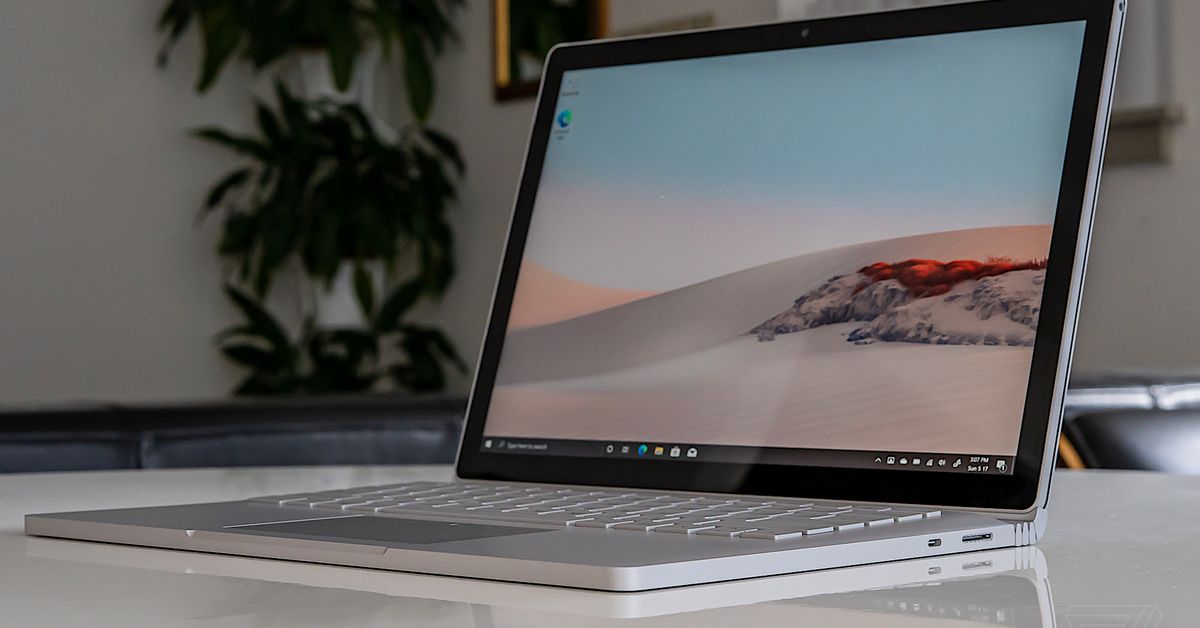 Microsoft’s new 13.5-inch Surface Book 3 looks exactly like the 2017 model — all the changes are on the inside. The big updates include 10th Gen Intel processors and new graphics options. Both are welcome updates, but they don’t fundamentally change the value proposition of the Surface Book.

That proposition is potentially a good one: for a higher-than-usual price for a pro-specced laptop, you get a device with a detachable screen you can carry around as a tablet. For many, it’s more than an impressive trick — when we recently joked on The Vergecast that there are only a handful of cool architects who actually need this feature, I was inundated with replies letting me know that yes, in fact, many real humans want a detachable tablet / screen.

The model Microsoft sent us for review is a $2,499.99 machine, which includes an Intel Core i7 processor, a healthy 32GB of RAM, and 512GB of storage. That’s all fairly standard, but the bigger upgrade is Nvidia’s GeForce GTX 1650 Max-Q GPU. It’s not the most powerful GPU you can get in a laptop by a long shot, but if your applications can take full advantage of it (when docked, of course), it could be meaningful.

Of course, that processor is a lower-wattage chip than you might find on other “pro” laptops — at least larger ones. But on the Surface Book 3, the 15W version is what you get on both the 13.5 and the larger 15-inch models. That’s simply because Microsoft needs the computer to, you know, work when you detach the screen. So most of the essential computer guts need to fit in there.

All of which is to say it’s hard to provide a heads-up comparison between the Surface Book 3 and another laptop because, in some ways, the Surface Book is in a class of its own. Its benefits don’t really fit on a spec sheet. But given that it costs significantly more than a “comparable” 13-inch Razer Blade Stealth, you should be absolutely sure that a) you want a detachable screen and b) your apps and workflows will work well with Microsoft’s GPU options.

This isn’t a gaming laptop, in other words, though it should be much more capable than previous editions. Just as a very non-scientific reference point, I opened up Rise of Tomb Raider in the Book 3’s native 3000 x 2000 resolution, didn’t touch any defaults at all, and its benchmark averaged out at 27.40fps.

The other thing that isn’t going to show up on a spec sheet is simply how well-built the Surface Book 3 is. The keyboard is wonderful to type on, the trackpad is fast and precise (though a little on the small side), and the screen looks great.

The hardware feels premium, but there are still compromises

Microsoft’s very fancy, very sturdy snake-like hinge does the job, and hitting the release button and hearing a metallic thunk of the “muscle wire” mechanism releasing the screen is satisfying. When separated, even this 13.5-inch tablet feels comically large, in part because the bezels haven’t quite kept up with the competition — though, again, “competition” isn’t exactly the right term.

Overall, though, I can’t help but think that Microsoft has taken this form factor as far as it can go. It’s still much thicker than other laptops, the hinge still has that big gap on the inside when closed, and it still feels just a little unbalanced on my lap. I am happy that there’s a USB-C port, SD card slot, and that Microsoft is packing chargers that are powerful enough to keep the things charged under extremely heavy loads (an issue with the last generation).

As with Apple and its new Magic Keyboard for the iPad Pro, my first impression is that Microsoft has done an excellent job executing on the idea of the Surface Book 3 — but I don’t think it’s the right idea for me. Whether it could be for you is a question for the review, and both Monica Chin and Tom Warren will have one for you in the near future.

Photography by Dieter Bohn / The Verge