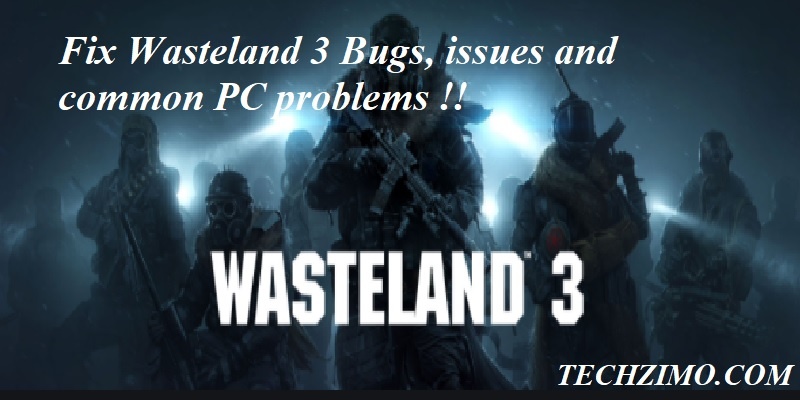 Facing issues or bugs in Wasteland 3? Want a one-shot solution? Then you have landed at the most appropriate place readers. Keeping in mind, your all needs, We have intended this post and it will give you a complete guide about “Fix Wasteland 3 Bugs, issues, and common PC problems”

Whenever talks are active about post-apocalyptic RPG games, then Wasteland series leads the charts always. Infact its first two seasons impressed us quite well and its fan following is surging quickly just after that. And now Wasteland 3 is all set to amuse us. It’s engaging or we can say the scathing storyline has impressed us a lot.

But what is irking most the gamers today is its bugs. The team is pro-actively working in this direction but still, there are many glitches observed so far. But don’t worry readers, as we are here with the complete guidance on these bugs and their fixes.

#1 Xbox users have had problems with bulk selling at Taiwan Jones’ shop.

Solution: It can only be resolved by closing the game.

This is an issue reported by mostly gaming mice users with macro controls and other additional keys.  It does not allow the in-game binding of your mouse buttons to particular functions.

Solution: The only quick solution for this, for now, is to use your Mouse OEM’s software to map your additional mouse keys to particular keyboard keys which can then be mapped to your desired in-game function from within the game itself.

You can also go for third-party tools that may assist you in achieving the same function but can introduce some other latency issues.

Problems on PC and fixes

To fix the basic bugs and issues, inXile Entertainment has already come up with some fixes with an update to Wasteland v1.03. With this update, you will see many bugs will get vanished automatically. But one thing worth noting here is that some issues will be resolved with this update not all.  But still, there is no issue in updating it as it may resolve your problem to some extent.

Restart your system and proceed with administrative privileges

If the fix mentioned here does not work properly for you then you must restart your system and also making the same changes to your anti-virus program using administrator privileges. If you have any other protection services in place then ensure that they are not preventing Wasteland 3 from writing files on your system memory.

Wasteland 3 Character Building Guide: How to Create Characters in Wasteland 3

This is all about How to fix Wasteland 3 bugs, Don’t forget to share it with your friends.