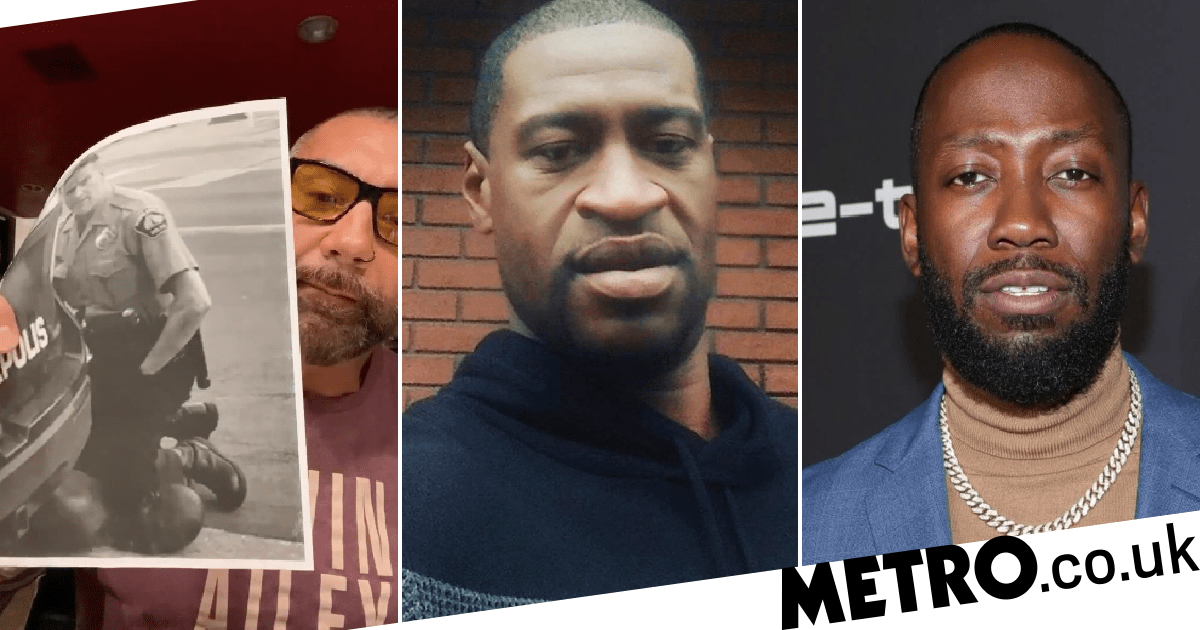 New Girl actor Lamorne Morris has shared a poignant message following the death of George Floyd, joining celebrities who have voiced their anger at the senseless loss.

Yesterday the likes of Snoop Dogg, Justin Bieber and Cardi B voiced their disgust on social media, after US man Floyd died on Monday (25 May) in Minneapolis following a brutal arrest which was caught on video and showed a police officer kneeling on his neck as he cried out: ‘I can’t breathe’.

Immediately the public reacted and four officers were fired, with an investigation underway by the FBI and Minnesota Bureau of Criminal Apprehension.

Stars have joined the rallying cry, with Lamorne sharing a stirring statement yesterday which said he wasn’t coming to fans as ‘Winston from that show’ but ‘as a Black man who is often fearful of the future’.

The 36-year-old told his fans if they didn’t like his message to unfollow – but as they did to think of his beloved character Winston having his neck kneeled on.

Sharing a message to social media, Lamorne asked: ‘What’s the solution? I’m not sure.’

The star continued: ‘I know some of my followers don’t care to see this type of stuff on my feed. But I’m not coming to you as “Winston from that show” I’m coming to you as a Black man who is often times fearful of the future.

‘If you’re a friend/follower of mine you should be outraged. You should be outraged regardless. The whole country should be marching. Right now we’re seeing people rioting in the streets but what else do you want people to do? Stay silent and take the loss like we’ve been doing? We. Are. People. Treat us like it!!!!

‘If you’re a follower of mine then you know that I post ridiculous stuff. Dumb videos, songs, pictures etc. and I’ll continue to do so, but this post is for those kids following me.

‘Instead of posting the latest dance challenge on tik tok today just start asking questions. Why did this happen? Why does it keep happening? What can I do to spread awareness?’

He said he understood he wasn’t a politician or ‘an aggressive political activist’, but he ‘has eyes and so do you’.

Lamorne went on: ‘If you don’t like my post then kindly click unfollow. But while you’re clicking unfollow, just imagine Winston from New girl begging for his life while publicly having his neck kneeled on. Then imagine them killing Winston. That would be a messed up episode of TV. Love y’all. #RIPGeorgeFloyd.’

The actor was joined by Marvel star Dave Bautista who said he ‘couldn’t live with himself’ if he didn’t speak out and ‘be on the right side of history’.

‘It’s hard being a fighter and not being able to fight, not knowing what to do, how you can fight, how you can help,’ the WWE icon said. ‘I’ve been very outspoken politically, which I never liked to be, I was never that guy.’

He continued: ‘I’m not going to be on the wrong side of history, I’m not going to stand by and not be a voice…There came a time not long ago when things had gotten so bad, that I said it’s time to pick a f**king side, stand on it and fight.’

Talking about Floyd ‘begging’ for his life, he believed the police officer acted in ‘defiance of all these people telling him to get off that man’.

He went on of the ‘traumatising’ footage: ‘If you’re not speaking up and saying you’re not ok with this, this sh*t’s going to continue…you’re a part of the problem and you’re letting this happen.

‘Don’t sit there and keep your opinion to yourself, you need to speak out. Everybody’s got social media now…let people know you’re not okay with this.’

Last night John Boyega refused to apologise after the Star Wars actor sparked a reaction on Twitter after posting: ‘I f**king hate racists,’ and clarifying he was directly speaking about ‘white on black racism’.

Telling fans that he is very aware that there are other forms of racism, John urged fans to ‘ignore ignorance’ as he spoke out in the video.

He said: ‘…a black man was just murdered in cold blood in the street Stateside again, while saying that he can’t breathe. That’s a continuous cycle going on – although I don’t live in the States, I’m black. F**k that.

‘I’ll say it again, f**k you racist white people. I said what I said. If you don’t f**king like it, go suck a d*ck. It’s not about career, it’s not about money, a lot of people like to bring it up… all those things were part of my dream, were a part of working. That’s got nothing to do with how you treat people.

‘It’s a madness, when I say it I mean it. You lot can’t rattle me, I’m not the guy to be rattled, I wasn’t raised by no weak people.’

His sentiments were echoed around the showbiz world earlier in the day, as Snoop Dogg shared a meme of former NFL player and activist Colin Kaepernick bending the knee alongside the officer kneeling on Floyd, and simply wrote: ‘No justice just us.’

He was joined by rapper Cardi B who posted a tribute photo to Floyd and wrote: ‘Enough is enough! What will it take ? A civil war ? A new president? Violent riots ? It’s tired ! I’m tired ! The country is tired !You don’t put fear in people when you do this you just show how coward YOU ARE ! And how America is really not the land of the free ! [sic]’

Award-winning director Ava Duvernay also tweeted: ‘You deserved your breath, your dignity, your life. Not to die in the street, murdered by a white cop’s knee on your neck. You deserve our tears, our prayers, our rage, our action. We must act – for you – and for all of those were no cameras are present. We must.’

Following Floyd’s death, demonstrators in Minneapolis have been demanding the officers are charged with murder, while protesters filled the streets – many holding banners which said: ‘I can’t breathe’.