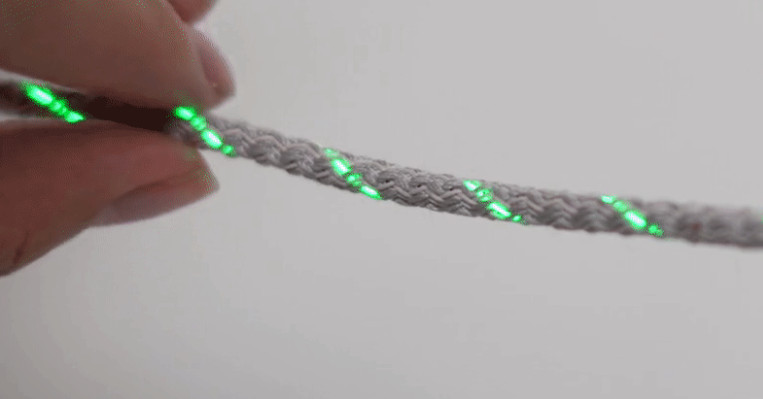 From touch-sensitive jean jackets to radar controls in smartphones, Google has always had a penchant for weird and wonderful user interfaces. Its latest is the “I/O braid” — a textile UI that lets users control electronics by pinching, patting, squeezing, or swiping a fabric cord.

The braid uses what Google calls a “helical sensing matrix” (or HSM) to register commands from users. A series of capacitive and conductive yarns are woven into the braid, allowing it to identify when it’s touched by someone’s hand with 360 degrees of visibility. Fiber optic strings are also woven into the fabric to provide visual feedback.

Although the braid is very much just a research project at this point, Google suggests a number of ways it could be integrated into consumer electronics. You could use it to add touch controls to the power cord on a smartphone speaker, for example, or to your headphones. Or you could create a hoodie with touch-sensitive drawstrings that connect to your phone and control your music.

Google says its software is able to recognize different gestures with around 94 percent accuracy. That’s a good start, but likely too inaccurate for consumer products. Another potential problem is that if the technology was integrated into headphones, say, then there would also be ample opportunities for accidental commands.

Nevertheless, Google says it found that the I/O braid paradigm could be preferable to traditional inputs. In a study comparing the interface to in-line headphone controls, users said twisting an I/O braid to change volume was faster and easier than using regular buttons.

Will the I/O braid ever make it to consumers? We’re a little doubtful. But then again, who would have expected that Google would partner with Levi’s to start selling a denim jacket with touch-sensitive controls in the sleeve? Let’s just wait and see.