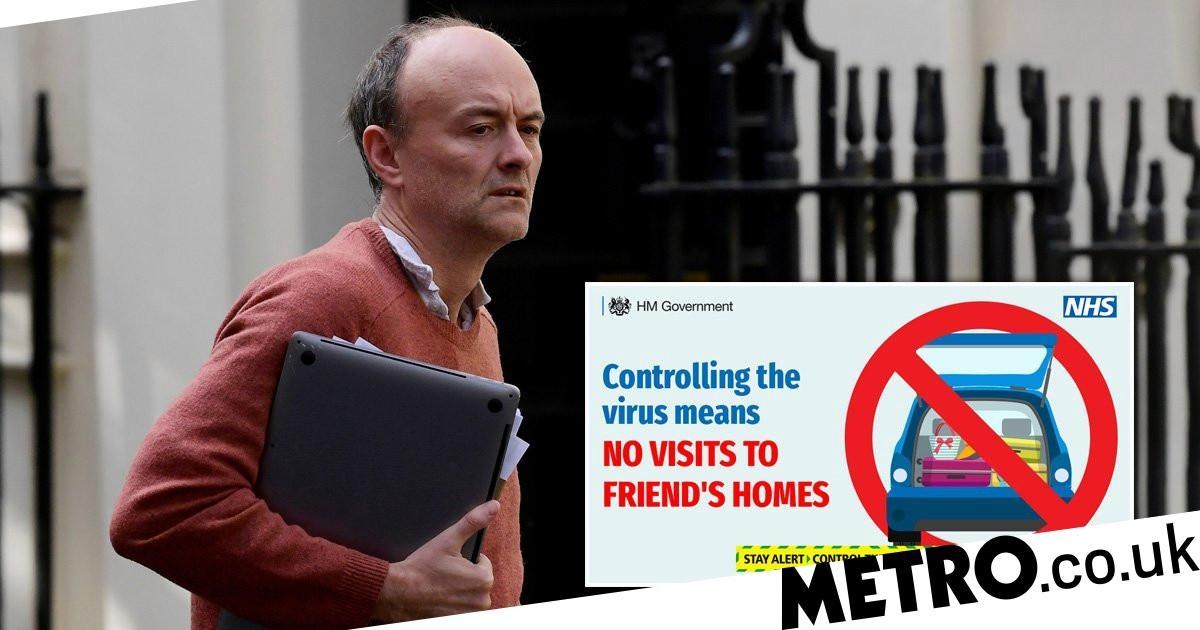 As Boris Johnson faces calls to sack his top adviser for allegedly breaking lockdown rules, some critics are warning a dangerous precedent has been set.

If Dominic Cummings can drive 250 miles to stay at his parents’ home in Durham with his wife, suffering from coronavirus symptoms, many warn not showing him the door could send a message that ‘lockdown is over’.

As the scandal rumbled on throughout the day, the Government posted a tweet saying: ‘There are a limited number of things you can now do in England that you could not do before. Controlling the virus means no visits to friend’s homes’.

Naturally, people were quick to accuse them of double standards as Cummings goes unpunished for his alleged discretion. People asked if the plea to the public ‘applies to the Prime Minister’s special advisers’ while one accused the Government of ‘gaslighting 65,000,000 people’.

Comedy writer Sarah Dempster asked if she could ‘drive to Durham if I’m a libertarian in a padded gilet’, while fellow comic and author James Felton said: ‘What if I have coronavirus though, I hear that’s somehow fine?’

Mike Scott added: ‘From today I’ve learnt we visit the Grandparents only if we’re 100% sure we’re infected. Can the Government please urgently clarify this!?’

John Garrett added: ‘Apparently the rules now are you can ONLY travel if you HAVE the virus, there by spreading the disease so those that don’t have it have a fair chance of catching it.’

Liberal Democrat Parliamentary Spokesperson for North Shropshire Helen Morgan said: ‘Nah, if you have symptoms it’s fine to jump in the car, drive the length of the country and spread the virus to your elderly parents. @MattHancock said so.’

Retired lawyer Fiona O’Leary said: ‘Really!? You expect anyone to take you seriously when those around No 10 are breaking the rules left, right and centre.’

In early May Professor Neil Ferguson resigned from the Government’s Scientific Advisory Group for Emergencies (Sage) after it emerged he had broken social distancing rules to meet his married lover.

Housing Secretary Robert Jenrick was also accused of flouting lockdown rules after visiting his parents more than an hour away, despite urging the public to avoid unnecessary journeys.

He was also criticised for travelling 150 miles from his London residence to his second home in Herefordshire before moving onto his parents in Shropshire – but he insists he was going to deliver food and medicine.

Number 10 has stood Cummings, saying he acted ‘in line with coronavirus guidelines’ by driving to his parents to organise childcare in case he also fell ill with Covid-19.

Despite a second story claiming the adviser travelled back to Durham days after returning to work in London, Downing Street has not changed its position.

‘We will not waste our time answering a stream of false allegations about Mr Cummings from campaigning newspapers.’

Good Morning Britain host Piers Morgan has ‘banned all cabinet ministers’ from appearing on the show.

He said the ‘only exceptions will be those who didn’t publicly support Cummings breaching lockdown’.