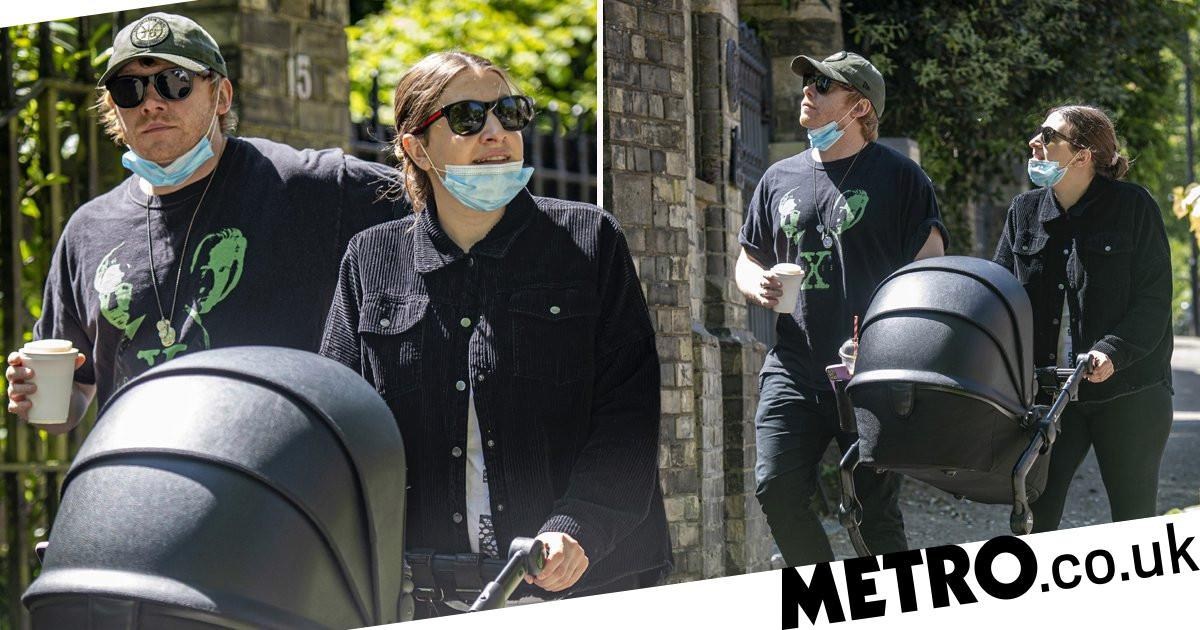 Rupert Grint and girlfriend Georgia Groome were every inch the doting parents as they took their baby girl out for a walk in the sunshine.

And they were spotted wearing matching face masks as they got some fresh air on a stroll with the little one.

Georgia, 28, rocked a white t-shirt and leggings for the outing, completing her look with a jacket and sunglasses.

While Rupert, 31, went for a similarly casual look in a black X Files t-shirt and black trousers, following suit with black sunglasses and a basketball cap.

Fans were shocked when it first emerged that the couple – who have been dating since 2011 – were set to start a family together in April.

Just a few short weeks later, reps confirmed that they had become proud parents for the first time.

‘Rupert Grint and Georgia Groome are delighted to confirm the birth of their baby girl,’ they said in a statement.

‘We would please ask that you respect their privacy at this very special time.’

They have yet to share a picture of their little one, or reveal her name with fans.

But, seeing as they’ve kept most of their relationship firmly behind closed doors, we might be waiting a while for any more details.

Rupert is the first star from the main Harry Potter trio to become a parent – something co-star Daniel Radcliffe admitted he’s still trying to get his head around.

In a video call with Watch What Happens Live, the 30-year-old, who starred as Harry Potter in the insanely successful wizarding franchise, said: ‘I texted him the other day and said I was so happy for him and it’s very very cool.

‘It’s also like super weird, for me, to think that we are all at the age where we are all having children, but we definitely are.’

Previously speaking about his pal’s impending arrival, he told the Inquirer: ‘I’m incredibly happy for him. He and Georgia have been together for a while.

‘It’s really exciting. It is crazy to think because it’s in my head. It still feels like we’ve basically just met and we are about 16 years old.’