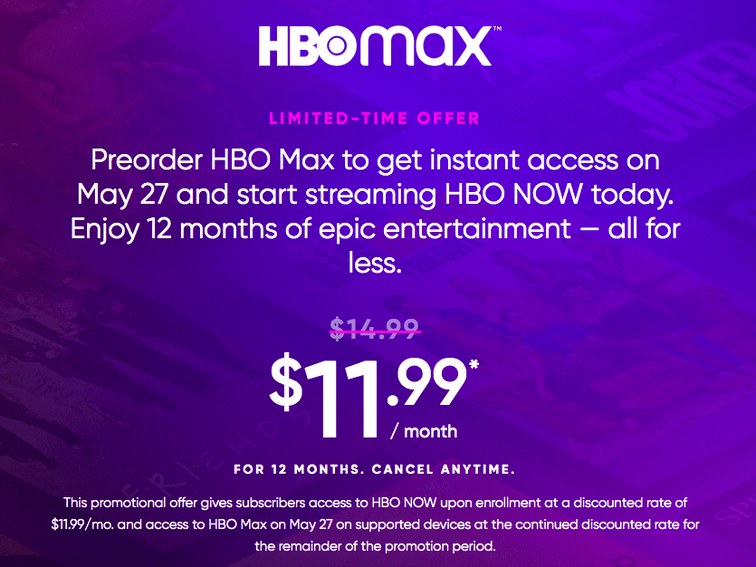 Want HBO Max but also looking to save a few bucks on the newest streaming service? You’ll want to get your order in soon.

As part of its promotion to get people signed up for its Netflix and Disney Plus rival, earlier this month HBO started offering a preorder discount on Max that drops the price from $14.99 to $11.99 per month for one year (plus tax). While not a major savings, $36 off is the equivalent of getting nearly two and a half months free compared to HBO’s long-established regular rate.

HBO says the offer is available to both new and existing HBO Now customers, so if you already pay for HBO you can cancel that subscription and sign up for this new one even with the same email and payment information.

For those who already pay for HBO Now the deal is kind of a no-brainer switch. You will still be able to continue using HBO Now for the next day until Max launches, at which point you’ll be upgraded to Max when it’s available. If you get it through an app, you’ll probably have to download the HBO Max app and log in to that using the same account.

Read more: HBO Max vs. HBO Now vs. HBO Go: What’s the difference, how do you upgrade?

An expansion of its current HBO offering, HBO Max offers all the same original shows and films as regular HBO, plus original shows such as The Not-Too-Late Show with Elmo and Love Life starring Anna Kendrick, films including Zack Synder’s director’s cut of Justice League in 2021, plus reruns of hit shows like Friends, The Big Bang Theory and Rick and Morty.