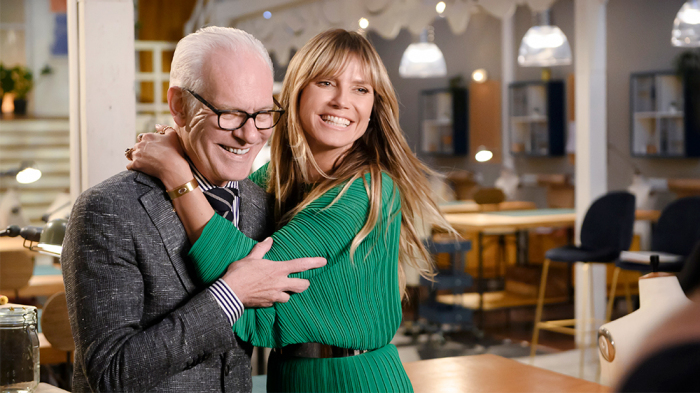 Heidi Klum and Tim Gunn are back together on TV, but their new show is not exactly a return to form.

The former stars of “Project Runway” — the sturdy fashion-design competition that, too big to fail, now makes its way without them — come to Amazon Prime Video with “Making the Cut,” a show that both revives their double act and seems at times to rebuke the show that came before. Rather than “Runway’s” mix of at-times green strivers, “Making the Cut” is comprised entirely of designers who have managed to gain a foothold in the fashion industry; these folks, seemingly cast for reasons other than TV drama, are more forcefully in competition with themselves than one another. They’re not tasked with sewing — we’re told that “in the real world,” designers don’t have to — and the challenges they face are vastly more grounded than “Runway’s” flights of whimsy, focused on generating garments that the public can actually buy.

In short, “Making the Cut” is a serious-minded and apparently earnest attempt to mint a genuine fashion-world superstar, a process that manages to leach much of the fun out of a formula that already has entertainment and education entwined in its DNA. “Project Runway’s” problem has never been that it isn’t instructive enough to an audience who’s likely learned a great deal about garment construction and the fashion market from it, and yet “Making the Cut” sets out to solve for that. It doesn’t just center accessibility of design by making winner designs available for purchase on Amazon (a clever tie-in): It makes contestants’ viability as the potential center of a global brand the object of the game.

Which is putting the cart before the horse to such a great degree that conversations about who should stay or go on the show get muddled. In yet another pushback against what traditional reality shows look like, “Making the Cut” can eliminate as many contestants as the judges like each episode, and also allows those eliminated to plead their case to judges before they go. That’s a lot of moving parts for the end of each episode — more when you account for four judges, plus Klum, plus Gunn in a mentor role — and the fact that conversations are about abstractions of the fashion market rather than, say, a garment’s construction hardly helps. Like a well-cut pair of trousers, a competition show’s appeal tends to come from the crisp snappiness of its design; that the show seems at times to lose its own plot and lose track of characters in pursuit of a shifting goal serves it little. And the first episode’s 70-minute running time is outright unflatteringly baggy.

There are pleasures to be had here: Naomi Campbell, one of said judges, is fascinatingly staging a meta-drama within the show about the indignity of not just getting to decide contestants’ fates unilaterally. (Her seething is an element the show deploys perfectly: Much more of Campbell simmering in the background might capsize the already-wonky episode endings, but we get just enough.) And while I’ll admit to being somewhat immune to the stagey bits in which Gunn and Klum, together, explore Paris, they at least evince a sense that someone on the show is having a good time.

Moments like those are perhaps a sop to viewers at home, of whom much is expected. If “Project Runway” is a general-interest series, “Making the Cut” is deeply niche, concerned with pragmatic matters that are both deeply germane to the fashion business and — just maybe — beyond the scope of what a reality show might have needed to concern itself with. Klum and Gunn remain eager guides for a show whose ambition is laudable. But, too often, from its premise to its lost and confusing judging process, “Making the Cut” feels — ironically enough for a show focused on design within reach — inaccessible.