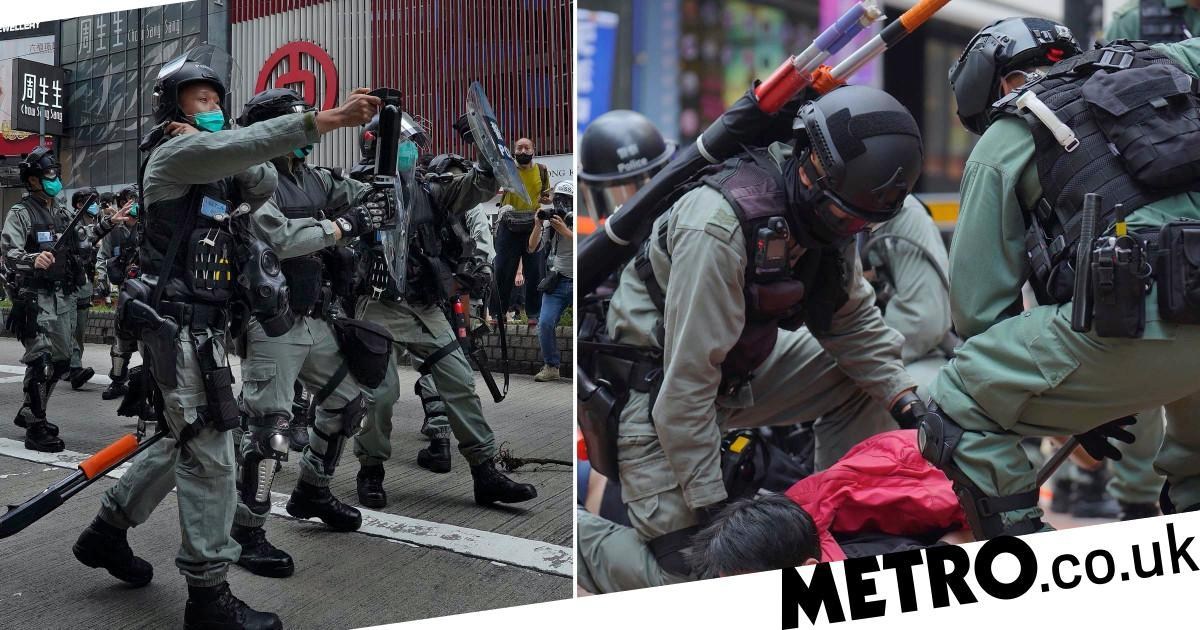 Protesters in Hong Kong have been hit by tear gas and water cannons after rallying against new security laws being pushed through by the Chinese government.

China is working to pass a law banning ‘treason, secession, sedition and subversion’ in the city, which has more democratic freedoms than the mainland.

Critics say it undermines the ‘one country, two systems’ framework protecting Hong Kong from being swept under harsh rules controlling speech and political expression in the rest of China.

A group of 200 senior politicians worldwide have signed a joint statement calling the plan ‘a comprehensive assault on the city’s autonomy, rule of law and fundamental freedoms’.

Last year, hundreds of thousands of Hong Kongers took to the streets against plans to allow Chinese authorities to extradite them to the mainland where they could be jailed for activities which are not illegal in the city.

Hong Kong’s leader, Carrie Lam, who backed Beijing’s advances, eventually backed down on the plans – but refused demands to investigate police brutality allegations, release thousands of prisoners arrested during the protests or reform the city’s parliament, only half of which is elected by the people.

Both police and protesters were observed taking part in violence.

Beijing has toughened its stance on Hong Kong since the coronavirus outbreak, which opposition figures see as all too convenient given local lockdown rules ban gatherings of nine or more people.

A well known activist, Tam Tak-chi, claimed he had been giving a ‘health talk’ and was exempt from the rules when he was arrested for unauthorised assembly.

Demands to ban ‘sedition and subversion’ of the Chinese government are in fact written in Hong Kong’s mini-constitution, but have never been written into law for fear of undermining free speech.

A previous attempt to ram it through in 2003 was abandoned after half a million people protested in the streets.

The law could bypass any need for extradition by allowing branches of mainland Chinese authorities to be set up in the city.

Chris Patten, who was Britain’s governor of Hong Kong before the handover to China in 1997, condemned what he called ‘a new Chinese dictatorship’.

He told The Times: ‘I think the Hong Kong people have been betrayed by China, which has proved once again that you can’t trust it further than you can throw it.’

Bernard Chan, a high-ranking Hong Kong politician who attends the National People’s Congress in Beijing, defended the security law on the basis that it was technically in Hong Kong’s constitution.