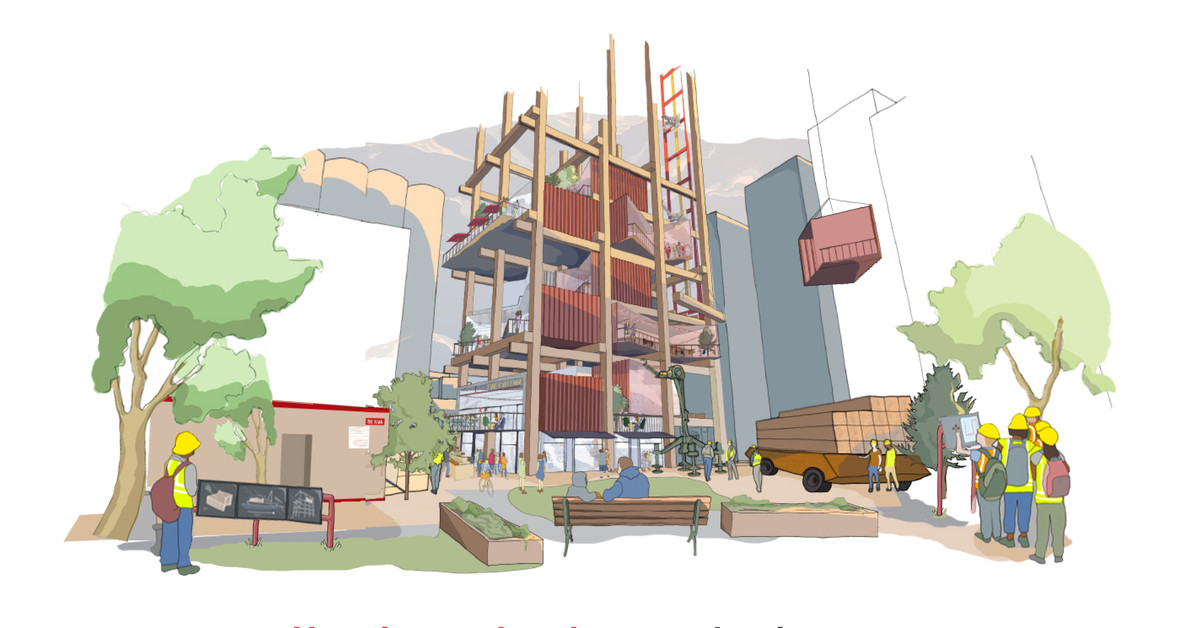 Last week, Google’s parent company abandoned plans for an experimental “city-within-a-city” in Toronto. Sidewalk Labs had spent years designing a futuristic overhaul of the Quayside neighborhood, complete with modular buildings, self-driving cars, and streets that could be adapted quickly to the district’s changing needs.

While Sidewalk’s plan grew out of Silicon Valley’s “moonshot” ethos, it actually fits into a much longer tradition of utopian planned communities. That includes one of the 1960s’ weirdest, yet surprisingly little-known, infrastructure projects: the Minnesota Experimental City. The Experimental City (or MXC) was conceived by an oceanographer and comic-strip artist named Athelstan Spilhaus, alongside a team that included futurist luminary Buckminster Fuller.

Spilhaus imagined a 250,000-person metropolis built from scratch in rural Minnesota, its buildings shielded (in one design) by a massive geodesic dome — creating a clean slate to solve urban maladies like pollution. Like the Quayside project, the MXC was an ambitious government partnership meant to pioneer the city of the future. But citizens — who weren’t keen on having their small town replaced by Spilhaus’ vision — launched a protest campaign that helped sink the project.

Filmmaker Chad Freidrichs, director of documentary The Experimental City, explains to The Verge that the MXC had a lot in common with Sidewalk’s Toronto neighborhood. But the two projects also demonstrate how our view of sci-fi cities — and why to build them — has changed.

Interview has been condensed and lightly edited for clarity.

How feasible were the Sidewalk Labs Quayside project and the Minnesota Experimental City?

Chad Freidrichs, director of The Experimental City: The Experimental City was definitely a project of its age. The idea was to dream big and to create a project that was on the scale of the problem. At the time, cities were really struggling in America and elsewhere throughout the world. In some ways, that made MXC less likely than a mere neighborhood in Toronto, so I think it always had to fight against that.

The fact that Quayside had Google’s backing does speak to its promise, I mean, Google does know how to get big things done. But at the same time, Google tends to abandon projects quite a bit, so they’re willing or able to throw out a project if it’s not working out the way they hoped. So in that sense, I think it was probably far more likely that Google would have built its neighborhood than MXC would have been completed as a full-fledged city of 250,000 people. But maybe that’s just a poverty of imagination on my part.

What are the big practical and philosophical contrasts?

I think the interest in urban experimentation caught my eye when I first heard about Quayside. That’s an old idea, it certainly goes back to at least the Experimental City, but when I was making The Experimental City, I kind of thought that this mentality was dead. That no one was really going to attempt a project anything like this in my lifetime. And I came to find out shortly thereafter that there were all sorts of people trying to make projects like this, Quayside being one of the more prominent ones.

I think that idea that we can do better through big data analysis is a really intriguing idea. That’s not something that was necessarily native to the MXC project. When they were talking about experimentation and how they were gathering their data, they were looking at it from kind of a scientist expert-level analysis, where you had people at the top kind of looking and seeing what’s going on within the city, or a polling process.

How different do you feel like the underlying motives were? A lot of people have pointed out that Google is a for-profit company that lives on data.

It’s pretty clear to me that data was the motivating factor for Google. The heart of the city does seem to be in cameras and sensors gathering all this data with the express intent of learning more about how the city operates. It’s no surprise, I guess, that they came up with a city that was founded around this idea and then they incorporated all these other elements that are kind of urbanist dreams — like the idea of building green parts of the city, restricting standard automobile traffic, making the city more walkable, making it more flexible.

“They were going to build a pollution-free city, and everything else kind of fell out of that.”

I think eventually the city proliferated, with everybody adding in what they were interested in. Which, again, is kind of what happened with Google — where they teamed up with people who were like “Well, I’d really like to have more parks in the city, and I would like to have a better approach to construction where we’re building things more modularly.” But I think in terms of the primal origin of the two projects, they were very different.

I have this sense there was this great optimism and idealism in the ‘60s, where people like Spilhaus had these pure scientific motives. Is that an oversimplification?

I’m not really sure. I’ve listened to enough recordings that lead me to believe that they were deeply interested in a kind of public good, a form of public good. I think Spilhaus genuinely was interested in science, but science put to human good, not science in a vacuum. And so I tried not to read the MXC project cynically.

“I think the planners of MXC were certainly aware that there was going to be resistance.”

But you’re talking about the 1960s, too. It’s not like that was just a bastion of people falling in line, either. So it’s very well known for its protests and suspicions of corporations and governments and all those things that were associated with the Experimental City.

Both projects seemed to be sabotaged, fairly or not, by the perception that they were kind of patronizing — that they’d come in and done things without people’s input and there was a grassroots opposition to them.

I think the idea of local citizen input is just the norm now, you just don’t do a project like that without at least giving lip service to the input of the community around it. That wasn’t necessarily the case in the Experimental City’s time. Many big projects at the time were elite-driven, they weren’t from the ground up. But you had this shift toward more appreciation of grassroots efforts. I think the planners of MXC were certainly aware that there was going to be resistance. But the effectiveness of that resistance, because of the larger changes that were going on in society, was something that they couldn’t really fight and didn’t quite predict.

Do you feel like we as a society are learning from these similar cycles playing out over and over?

It’s so interesting. I’ve heard of several of these kinds of projects, and they’re all almost always using technologies that are refinements of things that were being discussed 50 or 60 years ago. I can give you explicit examples from the Experimental City. For instance, utilidors — the idea of having a utility channel in which you can plug in modules and change the wiring without having to dig up the street. Google incorporated that idea — that’s a really, really old idea — into its proposal.

And it’s a really good idea! The only downside is expense, and I suppose that’s a compelling reason. But if you feel like the city will be changing quite a bit, then it’s a perfectly rational thing to do.

“It can make you feel maybe a little bit jaded.”

Or the idea of modularity, that’s something people were going crazy for in the ‘60s with megastructures. Eventually MXC was going to have a megastructure where you’d just have a frame for your main structure and you could plug in units based on what you needed, so it would be constantly shifting. I saw similar kinds of language in Google’s proposal as well. So these are relatively old ideas, we just haven’t found a way to actually do them yet.

It is kind of, in a way, dispiriting that we don’t have utilidors to a great extent, or modular construction, or autonomous vehicles — I guess we don’t have the technology quite there yet. We’re still dealing with the automobile 60 years later, and it’s been a marginal improvement certainly, in terms of gasoline consumption and pollution and safety, for sure. But how many tens of thousands of people die in auto accidents each year? How many thousands of tons of carbon dioxide are released into the atmosphere by internal combustion engines? Why haven’t we solved that yet?

So yeah, looking into the history of these ideas and these cities, when you see a new project being announced, it can make you feel maybe a little bit jaded — because, you know, it was all being proposed 60 years ago, and we didn’t make a whole heck of a lot of progress.