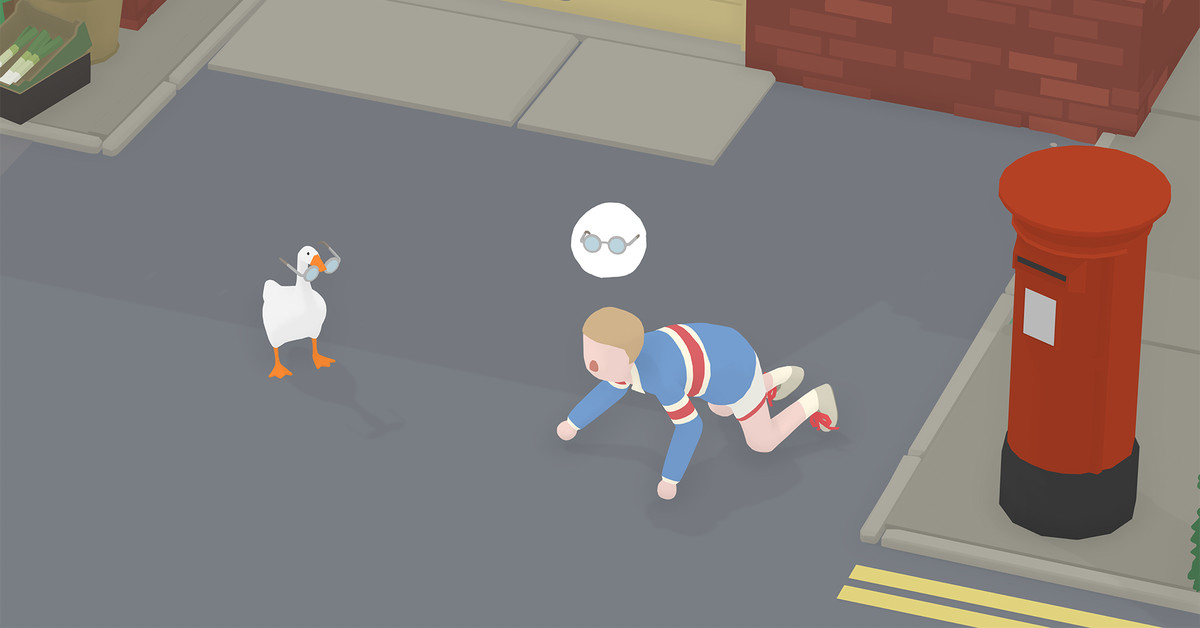 After launching Untitled Goose Game on my Nintendo Switch, the game loads into its opening credits, transitioning from logo to logo. First, it credits the studio that made it, House House, then the publisher, Panic. After that, the screen reads “with support from Film Victoria.” Although the moment is brief, the credit on-screen gestures toward a larger trend in video game development: the growing importance of public arts funding.

Film Victoria, which was founded by the Victorian State Government in Australia, started investing in games over 25 years ago and is one of the oldest public video games funds. Throughout that time, it has provided a crucial resource to game developers starting out: a clear, accessible path to funding. In doing this, government programs like Film Victoria have changed who gets the means to make games and opened up opportunities to more game makers from nontraditional backgrounds. This, in turn, changes the games we see made.

If it weren’t for public funding, we would have never seen the bumbling antics of Untitled Goose Game. The game became a viral sensation and went on to win Game of the Year at the 2020 Independent Games Festival and the DICE Awards. In many ways, it showed that state governments’ investments had paid off. Public funding was no longer just for niche projects. Now, Film Victoria has become a monolith in Australian indie game development and has extended its cultural influence worldwide.

It’s no secret that it’s hard to make it as an indie developer. Plagued with uncertainty, a seemingly endless amount of competing releases, and unknown platform algorithms, the prospects for new indie studios starting out are grim. These opportunities are even more limited if you come from a marginalized background. So when the developers of Mutazione set out to make a game they describe as a “mutant soap opera,” they didn’t know where to go.

“We were really new to the entire games business. We didn’t have any business contacts that we could pitch our game to and get funding through,” Nils Deneken, founder of Die Gute Fabrik, says. Deneken had a strong vision for a game but no means to make it.

That’s where public funding came in. For the developers of Mutazione, they knew that they could go to a public event where representatives from the Danish Film Institute and learn how to apply for funds. “The existence of these grants is just common knowledge in Denmark,” Deneken says “The events are always listed publicly and have a description. The funding organizations are good at reaching out to developers as well.”

“Part of what we do is advocate for different types of storytelling.”

They applied and ended up receiving a grant to prototype Mutazione, a game that went on to receive four Independent Games Festival award nominations and won the category for Excellence in Audio. Early prototype funding is relatively common for public funding. Government programs will provide seed funding for projects to get off the ground. Caroline Pitcher, the CEO of Film Victoria, told The Verge that while the organization accepts proposals for games funding for projects at all stages, “the majority [of our grants] come in at a prototype stage.” Film Victoria’s grants provide up to AU$150,000 to developers for a project.

Once a developer receives a grant, they follow procedures to report their work. Film Victoria requires funding recipients to demonstrate the completion of the work through the presence of updated builds with gameplay changes and iterations. They also require recipients to “provide interim reports at set milestones during production, submit a detailed report at the end of their funding period, and acknowledge the assistance provided in game and in any promotional activity,” Pitcher says.

Funding games like this plays a crucial role in helping projects get off the ground. Of the three studios The Verge spoke to for this article — Die Gute Fabrik, DragonBear Studios, and House House — all three said that public funds were critical to their existence as game studios.

Michael McMaster, director and founder at House House, says that his team likely wouldn’t be full time at their studio if it weren’t for the support of their local funding source. “I suspect that without [Film Victoria’s] support, we’d still be making games in our living rooms around day jobs, or probably just wouldn’t be doing it anymore,” McMaster said.

In addition to lowering the barriers to start making a game, public funding also changes the kinds of games that receive funding. These funding models support the idea that video games can have cultural value and are assessed for reasons other than the bottom line. It gives us a protagonist goose or a telenovela-like mutant soap opera. It opens up opportunities for new kinds of games to break into the industry.

In Victoria, Australia, public funding from Film Victoria and Creative Victoria is supporting emerging indigenous practitioners entering the video games industry through DragonBear Studios. “We are one of the first studios in Film Victoria to do a commercial PC game with indigenous content. Part of that is because there aren’t that many indigenous practitioners yet, and we are trying to increase the pool. I don’t think investors would have gotten that straight away, and we couldn’t have gotten the capital to get the funding,” says Paulina Samy, creative director of DragonBear.

“We want to make sure our product succeeds.”

“By and large, the games that are commercially feasible in the games industry are generally very narrow games that are about action. And not just shooting. They occupy limited, narrow genres, both in the AAA and in the indie space,” Keogh says. “By providing funding where people immediately don’t need to think about ‘How will I make the money back I sunk into this?’, [it] allows people from more precarious, more marginal backgrounds to make the games they want to make and tell their stories.”

That being said, Samy hopes that DragonBear Studios can strike a balance between artistic expression and making a commercially successful project. “On one hand, it’s good that we get this funding because we could make the most artsy game you’ve ever imagined and not worry about making money. But on the other hand, we only get one pool of funding, so if we are to consider sustainability, we want to make sure our product succeeds,” Samy says.

The drawbacks to public funding

Although state governments are more willing to fund an unconventional project, like a game about a boisterous goose, this doesn’t mean that these funding sources don’t have their own biases as well. Most of these funds still hold on to the legacy of the programs that have come before it.

Funding within the Victorian State Government falls under screen media. Pitcher says “games are recognized as a form of screen creativity, innovation, and entertainment alongside film, television, VR, and video on demand projects.” Because of the legacy of film, “there is an emphasis on storytelling and popular culture rather than just art,” Keogh explains. Grants also often emphasize publishing games that tell “Australian” stories. This focus on national storytelling and connection to film leads to a preference toward games that emphasize narrative elements. This is true not just for Film Victoria, but across the globe.

Creative Europe, which is the European Commission’s program to support the culture and audiovisual sectors, launched its first funding call in 2014. The program funds games that “are substantially interactive with a narrative component.” Similarly, a grant fund for game development in New Zealand privileges games that “have a strong story focus.”

“In the end, you were underpaid and struggling to keep that deadline.”

For developers who may want to put their game in an art museum, public funding still might not be the ideal model. “Though Film Victoria is relatively progressive in its outlook, it is also constrained by its remit, and I suspect that more radically experimental games work is still underserved in Victoria, with game development understood by the government more or less as a creative industry, rather than an artistic practice,” McMaster says.

Gaps in funding aren’t the only potential drawback to public funding models. Another serious issue that arose in conversation was crunch. The developers of Mutazione were happy to receive funding even though they had less experience in game development when they pitched their game. “Because of that inexperience, you would set too ambitious goals for the demo that you would give them. So in the end, you were underpaid and struggling to keep that deadline,” Deneken says.

“A lot of [indie developers] end up in these very precarious, stressful situations. Forcing themselves into unpaid overtime and crunch,” Keogh adds. “And sometimes government funding helps them because it gives them a bit more. But it often can just amplify that precarity and dangle that carrot on a stick for just a bit longer.”

There is no doubt that public funding has its own set of limitations. However, according to Keogh, it is necessary if a country wants to grow its game industry. “The only way for governments to support game development is to support public funding,” he says.

Although this money may not seem like a lot when compared to enormous blockbuster game studios, Keogh characterizes the Film Victoria’s presence as having a “massive influence” on the Australian games industry. In the early 2000s, Australia was a site for “cheap off-shore labor.”

“Now, someone might look at Victoria and say, ‘Hey, that looks like a cool place where cool games are made.’”