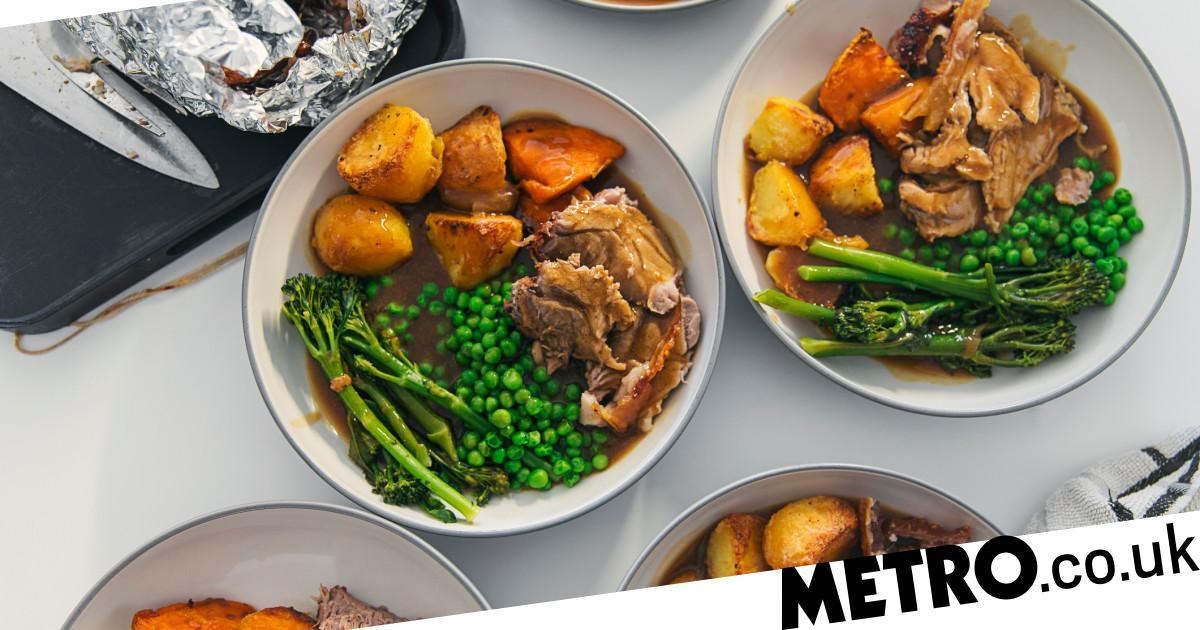 It might be May and officially ‘British Summer Time’ but when the sun goes in and the temperature drops a little there’s nothing like looking back to the colder months and whipping up a delicious Sunday roast dinner.

Yorkshire puddings, crispy roast potatoes, honey roast parsnips – a perfect roast is so much more than just the meat you eat and what you put it with can sometimes make or break how successful your Sunday roast spread is.

To help you cook the perfect roast every time, we’ve gathered some top tips from experts who know a thing or two about rustling up a roast that even the Masterchef judges would be impressed by…

How to cook a roast chicken

The most common meat cooked by those putting together a roast dinner, chicken is one of the easier meats to prepare and cook – but can still go wrong if not done properly.

No one likes a dry slice of chicken now!

Step 1 – The night before: Pour the water and salt into a large clean vessel and stir well. Carefully submerge the chicken – pour in more water if needed – then cover with cling film and refrigerate overnight.
Step 2 – The next day: Remove the chicken. Pat dry with a clean tea towel or kitchen towel. Place on a baking tray on the side for 1hr so it’s at room temperature. Preheat the oven to 200C.
Step 3 – Parboil the potatoes on the hob for about 7min. Place a second baking tray with the goose fat (or olive oil) in the oven for 1-2min so the fat heats up. Remove it – be careful not to burn yourself – and smother the potatoes with the fat or oil in the tray. Season with salt and pepper.
Step 4 – Massage the chicken with the butter under and over the skin, covering it. To finish, rub with the olive oil so everything is coated – you want the crispiest skin in town. Season well. Make sure you’ve got the chicken in the tray that you’re to roast it in. Now carefully, from a jug, pour a good glug of white wine or cider (approx 60ml-100ml) into the cavity.
Step 5 – Chop the garlic bulb in half and pop in the cavity, along with half a lemon and some thyme.
Step 6 – Roast in the oven at 200C. After 10min, turn it down to 180C and put the tray of potatoes into the oven. Add the shallots to the chicken pan. From there, cook everything for 60-70min, turning the potatoes now and again.
Step 7 – In the final 10min of cooking, crank the oven back up to 200C again to maximise crispness. To test if the bird is ready, poke a skewer into the thickest part of the thigh –the juices should be clear, not pink.
Step 8 – Remove from the oven and place carefully on to a serving plate, leaving as many juices as possible in the baking tray (to make gravy with). Cover the plate with foil and rest for 20min. Leave the potatoes in until they’re golden and crisp.
Step 9 – To make the gravy, place the tray with the chicken’s juices over a hob on low heat. Deglaze by adding 100ml white wine and simmer for a few minutes, then add 100ml water and whisk, scratching the sticky meaty bits off the tray. Taste and season if you need to. Strain for a smoother consistency. Add a sprinkling of rosemary if you wish. Pour it into a gravy jug. Serve with the roasties and chicken

How to make perfect roast potatoes

Roast potatoes, voted time and again everyone’s all time favourite part of a roast dinner, are a key ingredient to cook correctly.

Take them out too soon and they are soft and under done, but leave them in the oven too long and you end up with little lumps of charcoal.

To cook the perfect roast potatoes, par-boil your peeled and chopped spuds for around 10 minutes before draining the water, popping them back in an empty saucepan to give them a good shake to fluff up the edges.

Next, lie them out evenly, with space around each one, on a tray that has been pre-heated with oil in the oven.

Lots of people use goose fat instead of oil to make the potatoes extra crispy, but if you are vegetarian or goose fat just isn’t your thing then vegetable oil works perfectly well or coconut oil – as long as you get an unflavoured version!

Season with salt, black pepper, mixed herbs and a little bit of white ground pepper if you like an extra kick and pop your potatoes in a hot oven at 200 degrees.

Cook them for a minimum of 40 minutes. You don’t need to turn them unless you’re cooking them for an hour or more – and this will partially depend on how crispy you like your roast spuds.

You need just three ingredients to make Yorkshire puddings, plain flour, eggs and milk – plus some oil to hand to cook them in.

For James Martin’s Yorkshire pudding batter, he uses eight eggs, one pint of whole milk and 225 grams of plain flour. That’s going to make a lot of batter – so we’d suggest halving that for a more manageable quantity unless you’ve got a crowd to feed.

How to make Yorkshire puddings:

David Barr, Yorkshire pudding Guru at Aunt Bessies, told Metro.co.uk that the trick to knowing you’ve made the perfect Yorkshire pud is what they look like when they come out of the oven: ‘The main thing is that the texture and structure should be crisp on the top edge, have softer bready sidewalls that lead to a little soggy bottom.’

How to cook honey roast parsnips and carrots

As is suggested by the name of this succulently sweet Sunday roast side dish, you’re going to need honey if you’d like to make honey roast parsnips and carrots.

The best type of honey to use is clear, runny honey as this will be the easiest to drizzle over your veg.

To make honey roast parsnips and carrots, peel and chop your vegetables into long batons before combing them in a bowl with a drizzle of vegetable oil.

Then add some spoonful’s of honey to taste – the quantity will vary depending on the amount of veg you are roasting and how sweet you’d like your parsnips and carrots to be, but a couple of tablespoons should be plenty.

Finish by adding some mixed herbs, salt and pepper to the bowl, giving it one last stir to make sure the veg is fully coated and then lay the vegetables out on a baking tray before popping in the oven at 200 degrees. They should take roughly 40 minutes to cook – but make sure you check on them regularly in case they need to come out sooner.

MORE: What to do with all the leftovers from your roast dinner