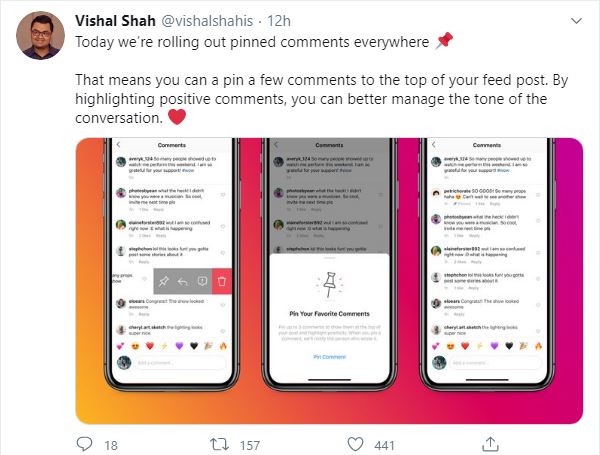 Social media sites are going beyond of our expectations noa days by adding more advanced features either it’s Facebook, Instagram or Twitter. Here we come up with another good news for Insta Lovers. yes, The Instagram added one new feature to the ap called pinned comments feature.

Now the Instagram users can pinned their favourite comment on the top of the comment section. The users can now pin up to three comments on an Instagram post to better control the overall tone of your post’s comment thread. The announcement made by Insta officially on Tuesday which the features was announced in May but it rolled out now. The feature is of a broader response to fight online bullying.

The comment section of Instagram posts can often be a place where online trolls and cyberbullies thrive. By giving the user more control over what type of comments people see first, Instagram hopes it will limit online harassment.

To use the new feature, simply swipe right on the comment(s) you want to pin and click on the pin icon. The person who commented will be notified that you pinned their comment.

The photo-sharing platform also implemented an A.I.-powered feature last year that automatically detects potentially nasty content and asks the offending user if they still want to post it. The warning aims to stop negativity before it ever gets published.

Bullying is a particular problem among younger people on Instagram. A 2017 study found that 17% of teens are bullied online, and much of that cyberbullying happens on Instagram. Instagram CEO Adam Mosseri acknowledged that it’s an ongoing problem, and previously said that the platform is trying to do more to empower the targets of bullying to stand up for themselves.