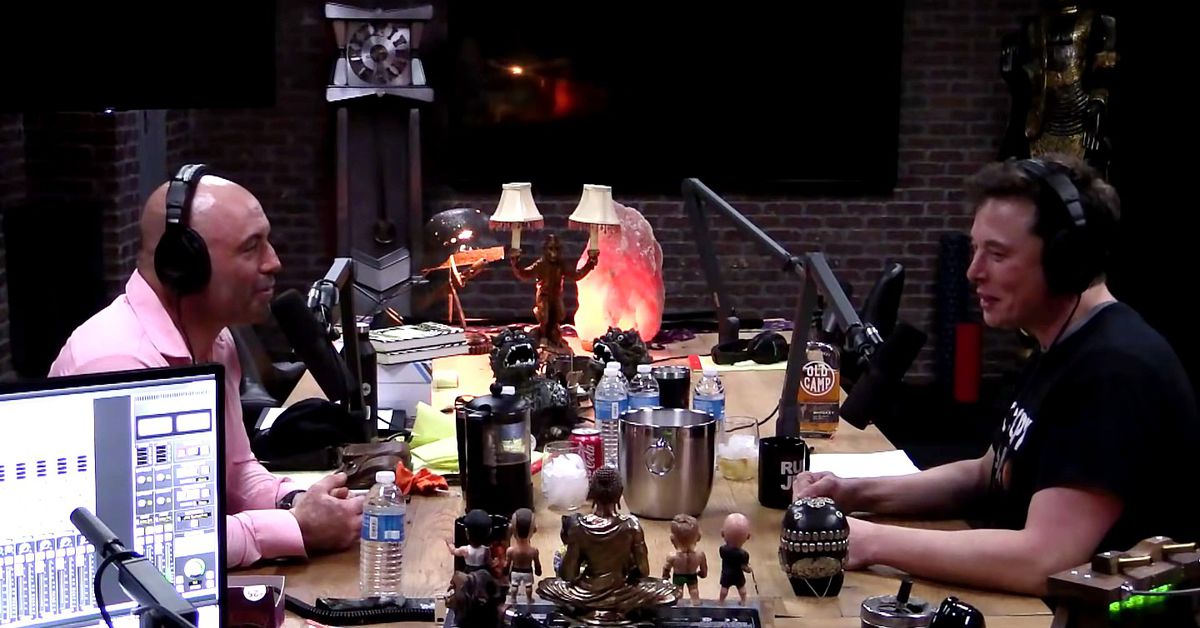 Joe Rogan is largely moving on from YouTube, a site that helped transform his podcast into a viral video-making factory, earning him nearly 10 million subscribers in the process. It’s the latest sign that creators who found success on YouTube see other platforms as the next step, but it doesn’t mean that YouTube is anywhere close to being cut out of the podcast game.

Later this year, Rogan will bring his mega-popular podcast, The Joe Rogan Experience, exclusively to Spotify. It’s not just Rogan who’s leaving YouTube behind, either. At a time when video podcasts on YouTube are more popular than ever, some of the platform’s biggest personalities have been taking their content to other services. YouTube star Emma Chamberlain launched her podcast off platform; Tyler Oakley and Korey Kuhl moved their show, Psychobabble, away from YouTube; and, like Rogan, Daniel Keem and Ricky Banks just signed a deal to bring their YouTube show, Mom’s Basement, to Spotify.

These creators’ success, though, often came from optimizing around YouTube as a platform in the first place. The Joe Rogan Experience YouTube channel has just under 8.5 million subscribers, with videos collectively pulling in more than 2 billion views since it launched in 2013. On top of those, Rogan currently runs on a secondary channel where he posts clips from the podcast, which are able to easily spread across the site by being recommended to new viewers.

“So much of consumption of [Rogan’s] stuff, especially for people who don’t know or don’t care about downloading a podcast app, is on YouTube,” Owen Grover, the former CEO of Pocket Casts and current CEO of TrueFire Studios, told The Verge, “both the full length interview and the 4-6 minute clips of whatever he’s done. The way he reaches his audiences — he just keeps coming up in their recommendation feed.”

“So much of consumption of [Rogan’s] stuff, especially for people who don’t know or don’t care about downloading a podcast app, is on YouTube.”

It’s important to note that under the Spotify deal, some of those clips will still find their way to YouTube. That’ll allow Rogan to continue using the platform to grow his audience (and make money), even while locking the entirety of his content inside Spotify’s app. Rogan can also use YouTube to air shorter clips he thinks will go viral and command additional attention.

Other YouTubers are focused on this same strategy, using channels dedicated to their podcasts. The hosts of Cold Ones, Chad Roberts and Max Stanley, have a channel with more than 1 million subscribers; the creators of Tiny Meat Gang, Drew Gooden and Cody Ko, have a channel with more than 600,000 subscribers; and Jenna Julien from Jenna Marbles and Julien Solomita boasts close to 1 million subscribers.

Rogan managed to use video and audio platforms, like YouTube, to “create different entry formats that scratches different itches,” Grover said. His audio podcast grew because his YouTube channel developed an entirely new audience. With the exclusive deal, he stands to lose a main entry point for an audience — arguably, a much younger one — that knows him from his YouTube videos alone. The growth he’s seen on YouTube proves just how crucial the platform was to growing his brand, Grover argued.

Gaming streamers have faced a similar issue as they sign lucrative deals with streaming platforms. When Tyler “Ninja” Blevins moved from Twitch to stream exclusively Mixer, he brought a good number of followers with him, but Twitch’s viewership base still dwarfs Mixer’s. Blevins loses out on new Twitch users stumbling onto his channel and subscribing. While his Mixer channel continues to grow, Mixer as a whole is still not seeing the viewing numbers that Twitch brings in.

Podcasters know they have to meet listeners where they are instead of trying to bring them over to one specific platform. Gaming and entertainment company Rooster Teeth started its podcast business in 2008, and it has grown into a mini-empire since then. Accessibility and approachability is a priority, as Rooster Teeth tries to entertain longtime fans and appeal to a broader new listener base, say Rooster Teeth’s A.J. Feliciano, director of partnerships and strategy, and Gus Sorola, a co-founder. Sorola pointed to new podcasts Rooster Teeth is working on as an example of “trying to make sure that we can we can be as friendly and approachable as possible.”

Part of that strategy means being everywhere. Feliciano argued that someone in their 30s who lives in New York City might rely on Spotify and Apple, but a teenager at home might associate podcasts with YouTube. The YouTube versus Apple and Spotify debate isn’t just about audio or video; it’s how “those particular audiences have been conditioned to consume content — period,” Feliciano said.

Rogan is a rarity. His audience will likely follow him to Spotify, and shorter clips he continues to upload on YouTube can still help find a new audience. Other exclusivity plays have proved less successful thus far. Luminary, a subscription-based podcast platform that boasts Hollywood celebrities, is burning through cash to make podcasts while struggling to build a subscriber base. Part of that issue is that exclusivity limits discoverability and accessibility — areas in which YouTube thrives.

Those viral moments are important, and YouTube’s reach is unparalleled

“By limiting yourself to a single distribution platform, it can affect your revenue and whole brand building initiative by limiting to just one thing,” Feliciano said. “The big issue for a lot of podcasters right now is figuring where that new opportune audience is and how do we stand out from the millions of million other podcasts that are out there?”

In the end, it’s about what lets hosts command attention. Rogan’s most viral, talked-about moments — including when Tesla CEO Elon Musk got high on the show — were on camera. The most viral moments from all of his episodes are because of the video component: screenshots, GIFs, sharable clips. Although Spotify has a video component, it’s not yet meant as a way to find new things to watch.

Those viral moments are important, and YouTube’s reach is unparalleled. Top podcasters may be happy to take an exclusivity deal, but they often only got there because of the success they found building a massive following on YouTube.