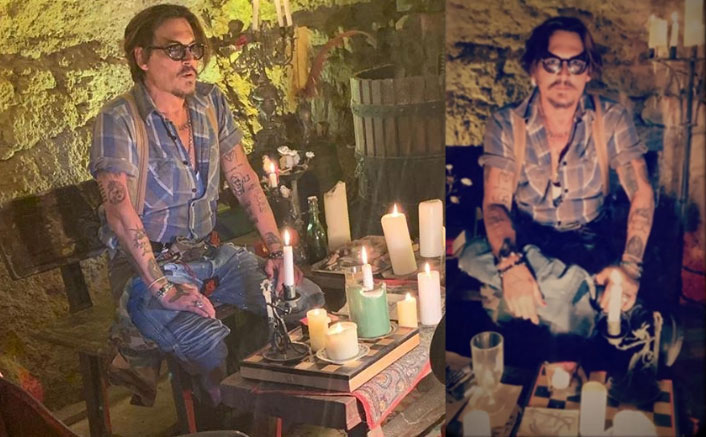 Johnny Depp has been grabbing headlines from the previous few weeks for his ugly authorized battle with ex-wife Amber Heard. Just a few weeks in the past, the Pirates of the Caribbean actor was allowed to file a defamation case towards his ex-wife.

Johnny Depp had reportedly accused Amber Heard of dishonest on him with Elon Musk once they have been nonetheless married in 2015. Final month, the Aquaman actress’ cosy pic with Elon Musk from Depp’s penthouse’s elevator leaked on the web. All this triggered a number of drama and their previous was dug as soon as once more.

Nonetheless, by not being attentive to any of this, the Incredible Beasts and The place To Discover Them actor joined Instagram yesterday. His first submit was his pic through which he’s sitting on a chair with plenty of lit candles saved in from of him on a desk. The actor captioned the pic, “Howdy everybody… filming one thing for you now… gimme a minute”

An hour later, he shared a video from the identical arrange through which he gave a particular message out to folks. Johnny Depp captioned it, “Isolation Collaboration with my pricey good friend @jeffbeckofficial . Hyperlink in Bio”

Within the video, the actor stated, “‘I don’t suppose I’ve actually ever felt any specific purpose to [join social media] till now.” Depp thinks that now could be the time to open up a dialogue as the specter of an invisible enemy (hinting at coronavirus) has triggered immeasurable tragedies and injury to folks.

He concluded the video by saying, “On a extra private be aware, thanks all in your kindness, your unwavering assist and your energy over these years.”

Take a look at the posts under:

We marvel what actually is the explanation Johnny has joined social media.

The actor isn’t following his ex-wife on social media. Speaking about Johnny Depp’s case towards Amber Heard, the actor is given permission to file $50million (£40.1million) defamation lawsuit towards his ex-wife.
Android & IOS customers, obtain our cell app for quicker than ever Bollywood & Field Workplace updates!