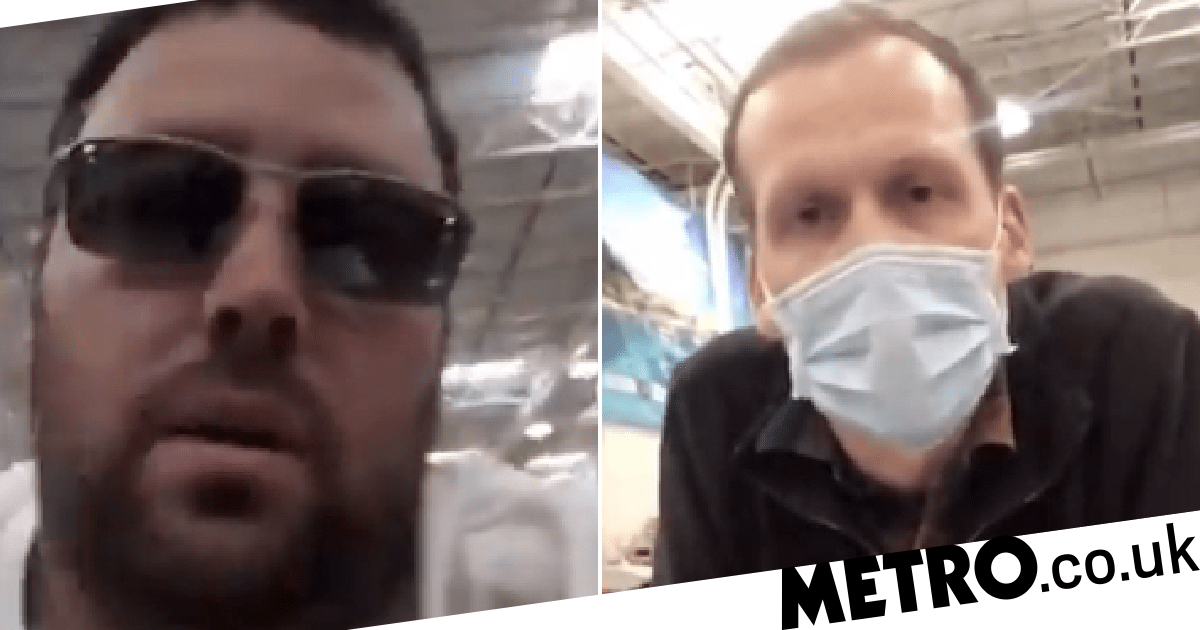 A male ‘Karen’ was unceremoniously banned from Costco after refusing to wear a face mask after claiming it breached his civil liberties. The unidentified cardholder tried to shame a store worker called Tison who ordered him to don the face covering, saying: ‘I’m just going to show my 3,000 follower Instagram feed, mostly locals.’

Tison, who was wearing a surgical mask, then cheerfully piped up with a wave and answered ‘Hi everyone, I work for Costco and I’m asking this member to put on a mask because that is our company policy.’

Turning to the unshaven shopper, who was dressed in sunglasses and a Nasa T-shirt, Tison continued: ‘So you either wear the mask, or – ‘ But he was interrupted by the man, who insisted: ‘I’m not doing it, because I woke up in a free country.’

Tison was then seen removing the man’s cart and banning him from the wholesale warehouse by saying ‘Have a great day, you are no longer welcome here in our warehouse. You need to leave.’

Realizing that he was about to be left without food or toilet paper, the ill-mannered shopper could be seen turning to a female friend – who was wearing a face-covering – and telling her he’d give her his membership card so she could continue shopping.

But the covidiot was unable to resist another petty dig at Tison as he walked away, saying: ‘He’s going to take the cart away because he’s a pussy little bitch. There he is, walking away with all my stuff. There he goes. Cos I’m not a fucking sheep.’

The clip was filmed at an unidentified Costco in the US, and initially appeared on Instagram, before being deleted. It has since been widely-shared on Twitter, with Tison winning near-universal praise for his calm and professional demeanor in dealing with the man. A ‘Karen’ is an increasingly popular term for a woman – or man – who acts in an officious and entitled way even when they are in the wrong.

Most stores across the US are only letting customers inside if they are wearing a face mask to try and stop coronavirus spreading. Some states, including New York, have implemented a mandatory face mask rule, meaning people must wear a mask if they visit a shop, use public transport, or are unable to keep more than six feet away from other people while outside.