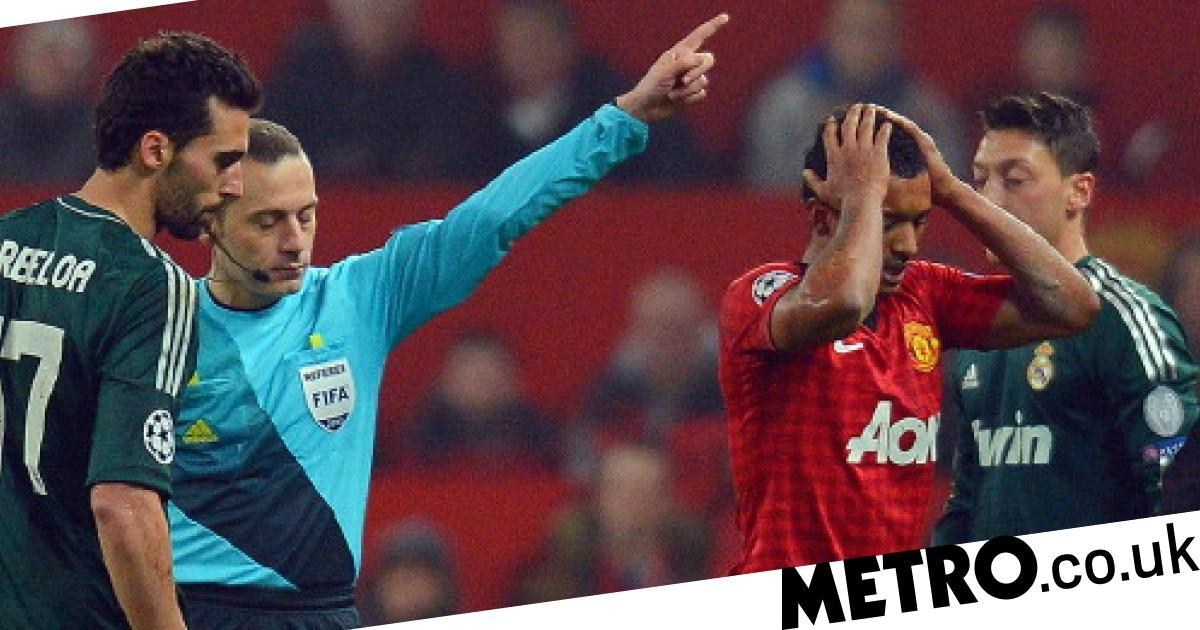 Sir Alex Ferguson’s hopes of lifting the Champions League in his final season at the club were effectively ended when Luis Nani received a red card against Real Madrid at Old Trafford.

United were on course to progress to the last-eight when Nani forced an own goal from Sergio Ramos in the second half to give the Red Devils a 2-1 aggregate lead in the second leg at the Theatre of Dreams in 2013.

However, the tie was turned on its head just eight minutes later when Nani was somehow sent off for a high foot on Alvero Arbeloa that left United down to 10-men against the likes of Cristiano Ronaldo, Angel Di Maria and Mesut Ozil.

It turned out to be Ferguson’s final game in the competition but the Scot bore no grudge against Nani as the Portuguese star revealed both Ferguson and Mourinho told him he should never have been sent off.

‘For sure he knew that was his last season because for a couple of years before there were rumours that Ferguson was in his last year but he kept going,’ Nani told the UTD Podcast.

‘That year was so special because we were doing great in Champions League and in the Premier League and he knew in that game if we beat Real Madrid we would be the champion again. It was a big opportunity.

‘Everyone knew that because we were so strong but they found a way to send me off. I was playing so well and making a difference in that game, i remember that.

‘There was no reason to send me off. Even Mourinho and Ferguson they came to me and said: ‘No problem, it’s not your fault’.

‘I apologised to the team even though I knew it wasn’t my fault, there was no intention. I was looking at the ball and doing the [Zinedine] Zidane control but they had to find something to help them [Real Madrid].’

Mourinho had been heavily linked with replacing Ferguson once the Scot stepped down and the United legend has since confirmed the Portuguese coach was one of the few people in world football that knew of his looming retirement.

Mourinho’s response that night – where he praised United, Ferguson and Nani – was read as the former Chelsea boss putting himself in the frame to move to Old Trafford.

‘Manchester United were playing very well. They were very compact, they were very aggressive, very well organised technically and the match was very difficult for us,’ said Mourinho.

‘I doubt with 11 against 11 we could win the match. I had a feeling that Modric would change the match because he brought to the game some qualities that we did not have on the pitch at the time.

‘I am a bit frustrated because we played so well against Barcelona and today I was waiting for more. I know they (Manchester United) are giants, not just physically but mentally. I know they are fantastic and have a manager capable of organising and motivating people.

‘But I was waiting for us to come here and play in a different way.’

The United squad were unaware of Ferguson’s intention to step down but there were some signs that night that the Scot was not his usual self.

After Nani’s sending off he made the uncharacteristic decision to gee-up supporters in the south stand by raising his fists on the sidelines and he sent assistant Mike Phelan to the post-match press conference because he was ‘too distraught’ to speak to anyone.

Ferguson’s departure hit the squad hard but Nani says he was particularly affected and wanted to leave the club immediately.

‘When he told me he was leaving I felt myself that I wanted to leave too,’ said Nani.

‘I was there for many years now, it’s a new coach and now it’s time for me to challenge myself in a different team.

‘I had a big injury, I recovered, went to the World Cup and the season I came back I was already in my mind that I had to leave the club.’