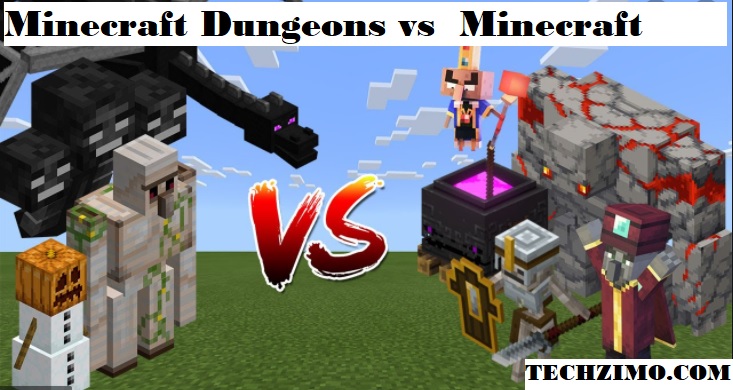 Hey, Gamers! If you are confused between Minecraft Dungeons and Minecraft and wanted to know which game is better? Then you are in the right place for this. In this article, we are going to do a comparison of these games. This will gonna help you find out the better one. So without delay, let’s get started.

If we compare Minecraft Dungeons with Minecraft, we can found a lot of major differences in terms of:

In this article, we cover all these differences in detail to help gamers who are confused between Minecraft Dungeons and Minecraft. 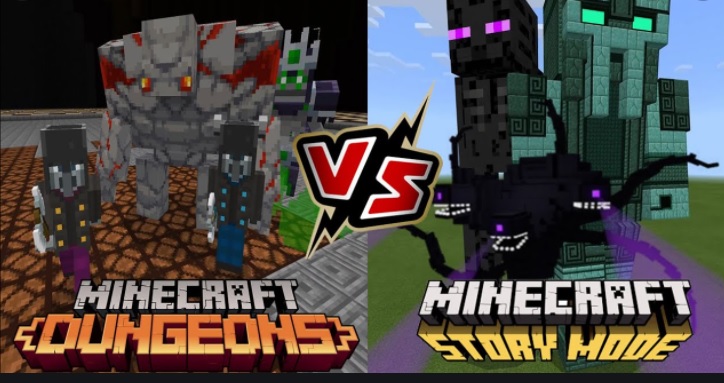 The Minecraft Dungeons has more narrative stories. The game plot is focussing on killing the enemies and save the villagers. These enemies kidnap peaceful villagers and terrorize towns with their army mobs.

On the other hand, Minecraft never had a defined storyline. In this game, you will be thrown into the world. You need to collect resources to craft items if you want to survive. Survival mode simply throws you within the middle of a boundless open-world environment and gives you the liberty to possess your own unique adventure as you go along.

2. The difference in creativity level of games

The scope of what you can do in Minecraft is just so much wider. Exploring, building, creating contraptions, making farms, building fortresses, playing with friends, survive on an island. However, Minecraft dungeons are just a hack n slash dungeon crawler that completely focuses on action and combat and does not focus on creativity.

When we check out the Dungeons vs. Minecraft comparison, the major difference between these games is decided by the shift in genre.

Minecraft is an exemplary creative sandbox game set in an endless procedurally-generated 3D world made from blocks, while Minecraft Dungeons is first and foremost a dungeon crawler.

Both games share the same universe, but there is a major difference in a genre as Minecraft Dungeons is an action RPG that may be considered a Minecraft version of Diablo.

The Dungeons was launched on May 26th, 2020, and in contrast to its predecessor, the Minecraft Dungeons is immediately available for all major platforms right from its release.

You can enjoy Minecraft Dungeons on many platforms. These are Microsoft Windows, Xbox One, PlayStation 4, and Nintendo Switch.

This is of course, not the case with Minecraft, which is only exclusive to PC with ports arriving at other major gaming platforms, after many years of its official release.

5. The Difference in the gameplay of both games

There is a major difference in the gameplay of both games as Minecraft dungeons do not feature an open world, mining, or building which is the main feature of Minecraft game.

In the latter game, the players will focus on finding treasure, solving puzzles, killing enemies. Gamers can use any weapon or armor, which they can’t use on Minecraft games.

There is a major difference in games when we compare both games in terms of action and combat.

The Minecraft Dungeons is totally focusing on action and combat. The players will need to blast and use weapons so as to succeed at the top of the campaign. However, This is not at all the focus of the Minecraft game.

The difference between procedural generation in Minecraft and Minecraft Dungeons is that within the newest game, whenever the player returns to a specific segment of the campaign, the dungeon will have a special layout and randomly spawns enemies, which is not the case with Minecraft Dungeons.

According to the developers, the multiplayer mode of Minecraft Dungeons is meant specifically for couch or online co-op. There won’t be any online matchmaking, only the cooperative mode which can allow up to 4 players to hitch forces and raid the Arch-Illager’s dungeons together.

While the multiplayer won’t be as massive as within the Minecraft game, which aims for a comfortable co-op experience, one could simply enjoy with a little group of close friends.

Both of the discussed Minecraft games have great and unique features and differ from each other quite immensely.

Minecraft Dungeons will introduce great variety to the series and open up possibilities for the old fans to experience the planet of Minecraft in an all-new way.