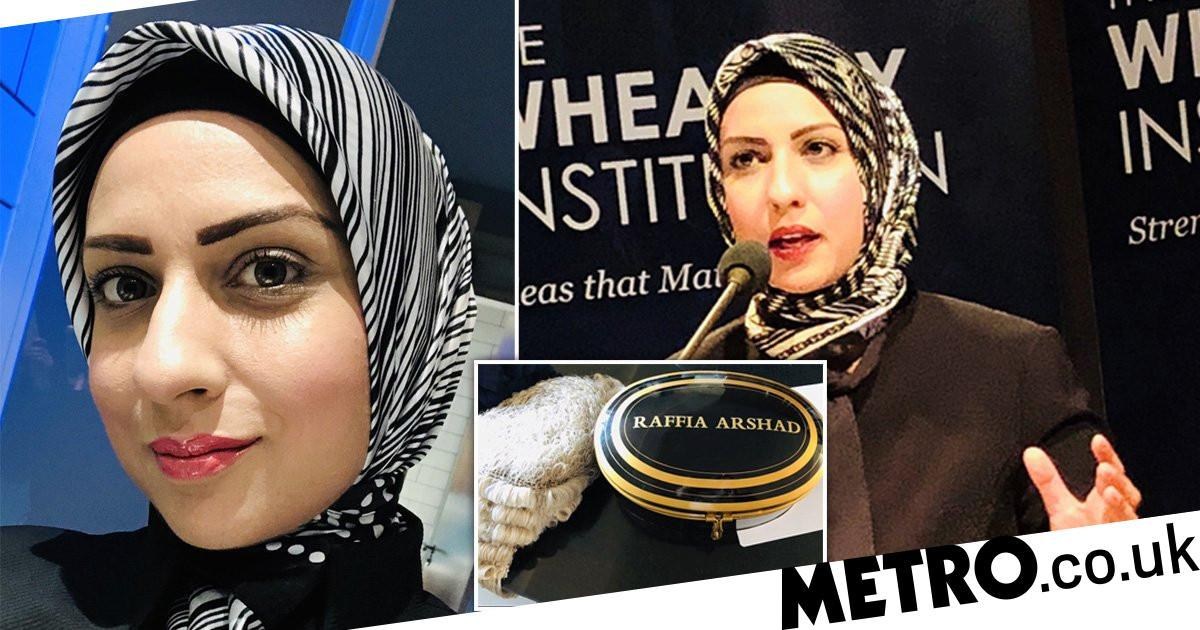 A woman who has become the first hijab-wearing judge in the UK says she wants young Muslims to know they can achieve anything they put their minds to.

Raffia Arshad, 40, started dreaming of a career in law when she was just 11 – but grew up questioning if there would be ‘people who looked like me’ and if a working-class woman from an ethnic minority background ccould make it in that world.

Nearly 30 years later, she is not only a successful barrister, but was appointed a Deputy District Judge on the Midlands circuit last week.

Speaking to Metro.co.uk, the mum-of-three says she now wants ‘to make sure the sound of diversity is heard loud and clear’.

‘It’s odd because it’s something I’ve been working towards for a number of years and I always imagined I’d be absolutely ecstatic when I found out.

‘I was happy, but the happiness I’ve had from other people sharing this is far greater.

‘I’ve had so many emails from people, men and women. It’s the ones from women that stand out, saying that they wear a hijab and they thought they wouldn’t even be able to become a barrister, let alone a judge.’

Although Raffia is a powerhouse with a 17-year career behind her, she says she still encounters discrimination and prejudice ‘sometimes on a daily basis’.

The Midlands-based judge, who grew up in West Yorkshire, experienced one the most crucial moments of her working life when she was advised by her own family member to not wear her hijab to an interview for a scholarship at the Inns of Court School of Law in 2001.

Her chances of success would dramatically decrease if she wore it, her relative warned her – but Raffia refused to bow to pressure.

She said: ‘I decided that I was going to wear my headscarf because for me it’s so important to accept the person for who they are and if I had to become a different person to pursue my profession, it’s not something I wanted.

‘So I did, and I succeeded in the interview. I was given a considerable scholarship. I think that was probably one of the most profound first steps in my career. It was a solid “yes you can do this”.’

After training in London, Raffia was called in 2002 and received pupilage in Nottingham, joining St Mary’s Family Law Chambers in 2004.

For the past 15 years, she has practiced in private law children, forced marriage, female genital mutilation and any cases with Islamic law issues, and has become the author of a leading text in Islamic Family Law.

But while her success speaks for itself, she says she still sometimes gets mistaken for a client or interpreter when walking into a court room.

‘I have nothing against the usher who said that, but it reflects that as a society, even for somebody who works in the courts, there is still this prejudicial view that professionals at the top end don’t look like me.’

She added: ‘I think one of the things that holds women back is Imposter Syndrome. There are many times I’ve been in a courtroom and I suddenly think: “Am I good enough?”’

With discrimination rife in some parts of society, Raffia believes that young Muslims will be inspired to follow their dreams if they see more people who look like them in every profession.

She said: ‘The judicial office are doing their utmost to promote diversity and at the time they appointed me they didn’t know I was going to be the first hijab-wearing judge. I’ve been appointed on merit, not because I wear a hijab.

‘But now it’s up to me to be that voice for them, to make sure the sound of diversity is heard loud and clear and that it gets to the appropriate places.’

The Joint Heads of St Mary’s Family Law Chambers said they were ‘delighted to hear of Raffia’s appointment, which was ‘richly deserved’.

Vickie Hodges and Judy Claxton said: ‘Raffia has led the way for Muslim women to succeed in the law and at the Bar and has worked tirelessly to promote equality and diversity in the profession.

‘It is an appointment richly deserved and entirely on merit and all at St Mary’s are proud of her and wish her every success.’