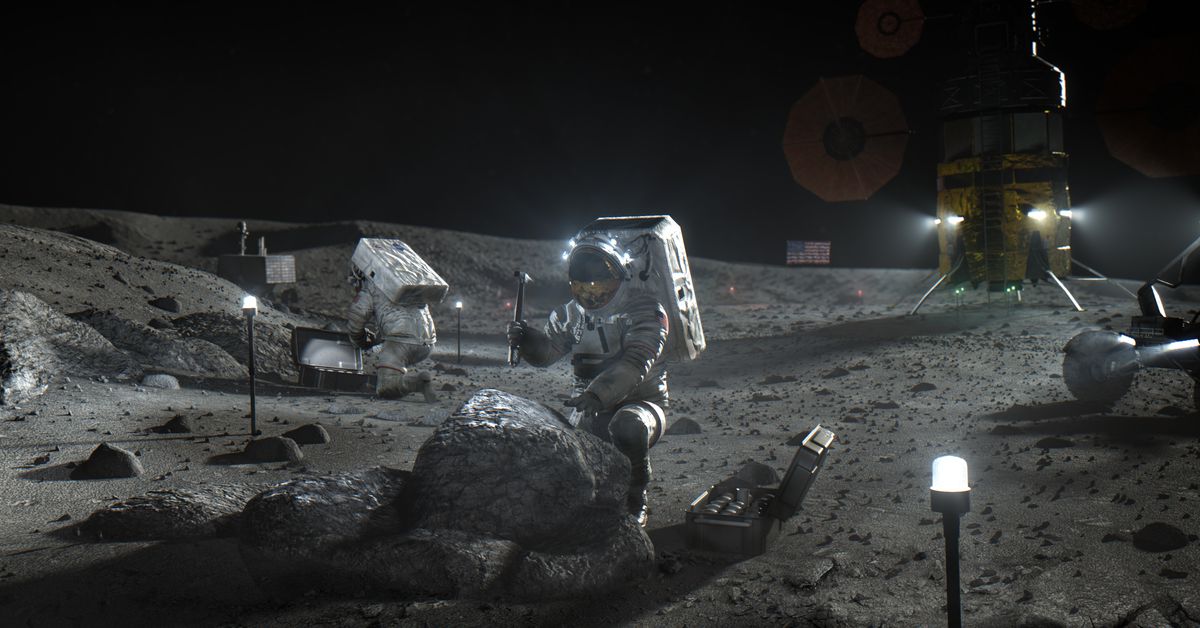 Today, NASA announced the creation of the Artemis Accords, a new set of standards on how to explore the Moon. The agency hopes that other countries will agree to the terms, which lay out how humanity will act on the Moon, including how to mine resources from the lunar surface and ways to protect heritage Apollo sites.

The Artemis Accords, first reported by Reuters, are a reference to NASA’s Artemis program, an initiative to send the first woman and the next man to the Moon by 2024. NASA administrator Jim Bridenstine has been clear that he wants the agency’s international partners to work with NASA to create a sustainable presence on and around the lunar surface. However, NASA wants everyone to be on the same page in how they’ll behave when they reach the Moon.

“When we go to the Moon, there’s a basic framework that we all agree on.”

“When we go to the Moon, there’s a basic framework that we all agree on,” Bridenstine said during a meeting on Friday morning. “And if you agree on that framework, certainly, we would love to have you be part of the Artemis program.” NASA worked with the State Department and the National Space Council to come up with these guidelines.

An international framework for exploring space already exists in the form of the Outer Space Treaty, which was signed and enacted in 1967. The treaty creates a series of loose guidelines for how nations are supposed to explore space. For one, the exploration of space is supposed to be a peaceful enterprise, and no one is supposed to put weapons of mass destruction up there. It also restricts anyone from laying sovereign claim to an outer space body and ensures we don’t contaminate the places we explore.

However, the Outer Space Treaty is purposefully vague, and the Artemis Accords are meant to provide a little more structure around NASA’s plans for the Moon. “They’re really, really vague,” Christopher Johnson, the space law advisor at the Secure World Foundation, tells The Verge. “‘States shall give due regard to the corresponding interests of other states. States shall prevent the harmful contamination of celestial bodies.’ Now we’re going to find out what those phrases mean under Artemis in the context of lunar activities.”

It’s a new dawn for space exploration! Today I’m honored to announce the #Artemis Accords agreements — establishing a shared vision and set of principles for all international partners that join in humanity’s return to the Moon. We go, together: https://t.co/MnnskOqSbU pic.twitter.com/aA3jJbzXv2

The idea is to create an agreement without going through the standard treaty-making process, which can sometimes be slow. Since NASA is squarely focused on getting to the Moon by 2024, the need for speed is there. “We’re not going to wait to negotiate a treaty that we think is in our national interest,” says Johnson. “We believe we can go to the Moon and use resources there, so therefore we’re going to go to the Moon and use resources there. And we’ll do so in a way that is in partnership with other countries.”

One thing the Accords would establish is something called “safety zones,” which would give potential explorers some room to work on the Moon, free of interference from other countries.

The Accords would also ensure that countries can extract and utilize resources that they find on the Moon. NASA has long touted its interest in mining water ice, thought to be lurking on the lunar surface, to use as drinking water or to create rocket fuel. However, there’s been some debate over whether that’s acceptable, as the Outer Space Treaty argues that nations cannot lay claim or own property in space.

“Here if you sign up for Artemis, you will agree that states have the right to access and utilize space resources.”

In early April, Trump signed an executive order supporting the US’s ability to mine resources from the Moon and other bodies, arguing that it does not conflict with the Outer Space Treaty. Now with these accords, NASA and the Trump administration want to take things a step further and get multiple countries to agree that this way of utilizing space resources is acceptable. “Here if you sign up for Artemis, you will agree that states have the right to access and utilize space resources,” says Johnson. “And that’s done in a way that’s in compliance with the Outer Space Treaty, but here they’re going to come up with the particulars of it. So if you go to the Moon, as part of Artemis, you can in fact use lunar dirt to build habitats.”

The agreement touches on other smaller logistical things such as making sure countries register the spacecraft they send to the Moon. Countries that are part of the agreement will also agree to share data openly in the same way that NASA does. Other provisions make sure that the Apollo landing sights would remain unharmed. That might mean setting up landing pads on the Moon that would stop the spread of harmful lunar dust whenever a spacecraft touches down on the surface.

While Bridenstine says that some countries like Japan and Canada are interested in this approach, others might not be so happy about it. Russia, for instance, was not pleased with the idea of the Artemis Accords when they were first reported; Dmitry Rogozin, director general of Russia’s state space corporation, Roscosmos, argued that “the principle of invasion is the same, whether it be the Moon or Iraq.”

“I think people are going to interpret it in a way that matches their preexisting ideology and understanding,” says Johnson.

Still, NASA is hopeful that other countries will get on board with the Accords. “There will be transparency; there’ll be reporting; there’ll be registration; that there will be on the surface of the Moon, as different countries are doing different things made in the same vicinity, that we can all operate in a transparent, very clear way so that we can accomplish more,” Bridenstine said. “That’s the ultimate goal.”