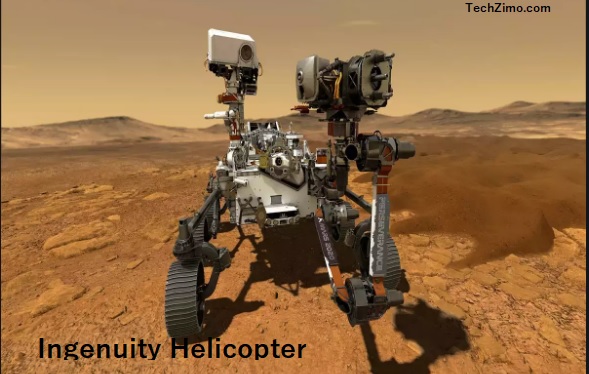 Ingenuity, a technology experiment, is preparing to attempt the first powered, controlled flight on the Red Planet – Mars.

After its first flight on Earth, NASA is trying to fly a helicopter on the other planet – Mars. On Feb. 18, 2021, it will be carrying a small but mighty passenger: Ingenuity, the Mars Helicopter.

There are many challenges in front of the Ingenuity Helicopter. The biggest one is the atmosphere of Mars. which is just one percent the density of Earth’s.

It might be called a helicopter but it is similar to the mini drones. It is of the size of the Tissue box. Weighing about 4 pounds.

Its blades are much larger. It can make 2400 revolutions per minute. Ingenuity will be equipped with two cameras, computers, and navigation sensors.

Engineers at NASA’s Jet Propulsion Laboratory in Southern California knew it was theoretically possible to fly in Mars’ thin atmosphere, but no one was sure whether they could build a vehicle powerful enough to fly, communicate, and survive autonomously with the extreme restrictions on its mass.

What is its Goal?

The helicopter doesn’t carry science instruments. Its objective is to demonstrate rotorcraft flight in Mars’ extremely thin atmosphere, which has just around 1% of the density of our atmosphere on Earth.

“Our Mars Helicopter team has been doing things that have never been done before – that no one at the outset could be sure could even be done,” said MiMi Aung, the Ingenuity project manager at JPL “We faced many challenges along the way that could have stopped us in our tracks. We are thrilled that we are now so close to demonstrating – on Mars – what Ingenuity can really do.

Ingenuity has four feet, a box-like body, and four carbon-fiber blades. It comes with two cameras, computers, and navigation sensors

Ingenuity will fly at altitudes of 10-15 feet and travel as far as 160 feet. There will be five fights. Each flight would take up to 1 minute and 30 seconds.