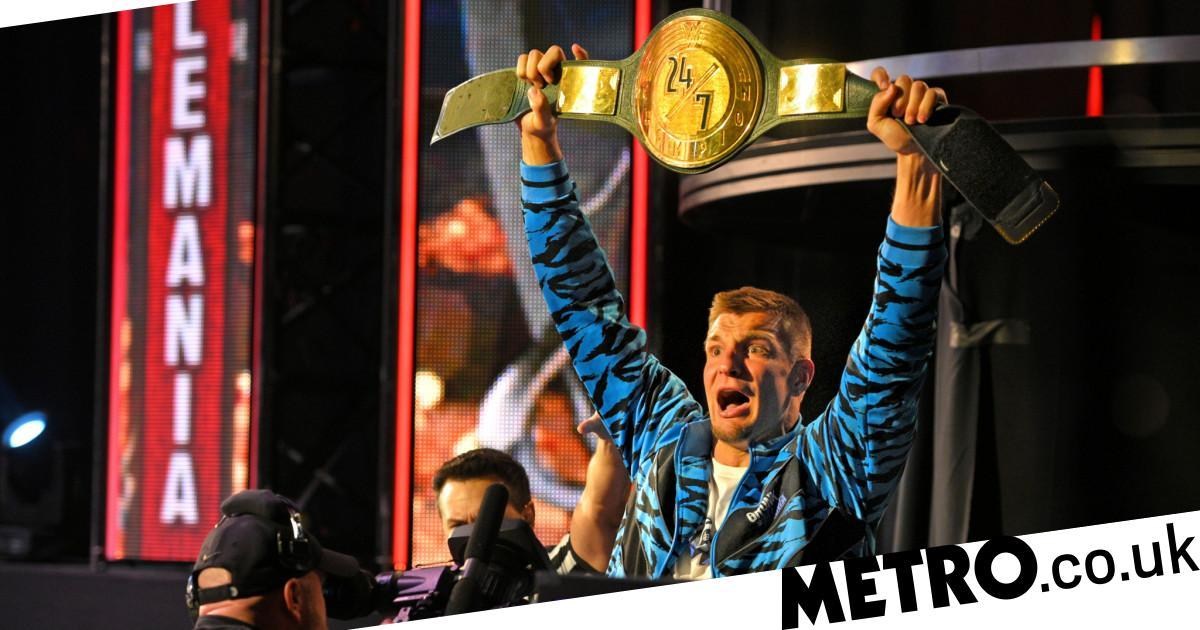 Rob Gronkowski has become the longest running 24/7 Champion in history by virtue of not being seen since WrestleMania 36.

However, the NFL star – who signed for the Tampa Bay Buccaneers shortly after winning the title in WWE – has pledged to defend the gold and keep it round his waist.

The Gronk made a rare appearance on Monday Night Raw this week, as he delivered a promo warning off former champion R-Truth and suggesting he’s going nowhere.

He said: ‘Now, I’m a nice guy, so I’m just gonna make sure you have all the intel you need during your quest. I am Gronk, WrestleMania 36 host with the most and reigning 24/7 Champ.

‘I know you have a lot of memories with this title, and you fought hard for it – but that’s in the past Truth. 24/7 Gronk is the present and the future.

‘Sixteen years of playing football and growing up with four brothers has prepared me to fight any time, any place.

‘So this 24/7, 7-Eleven, I-95 South, W9, whole nine years championship stays with me brother. Take this is a warning R-Truth – I will see you coming because I got eyes on the back of my head.’

Former title holder Riddick Moss previously held the gold for 41 days before dropping the title to R-Truth in March, which started the latter’s 35th run with the belt.

He was beaten shortly after by Mojo Rawley – who is close friends with the Gronk in real life – on the first night of WrestleMania 36.

During the second night of the show, Gronk leaped from a podium at the Performance Center onto a sea of wrestlers before pinning his BFF and winning the championship – which he has held for 51 days and counting.

His WWE future became uncertain when the Buccaneers deal was revealed, but it seems he’s at least sticking around to be part of the sports entertainment brand for now – and putting effort into developing his storylines.

It will be interesting to see where things go from here.