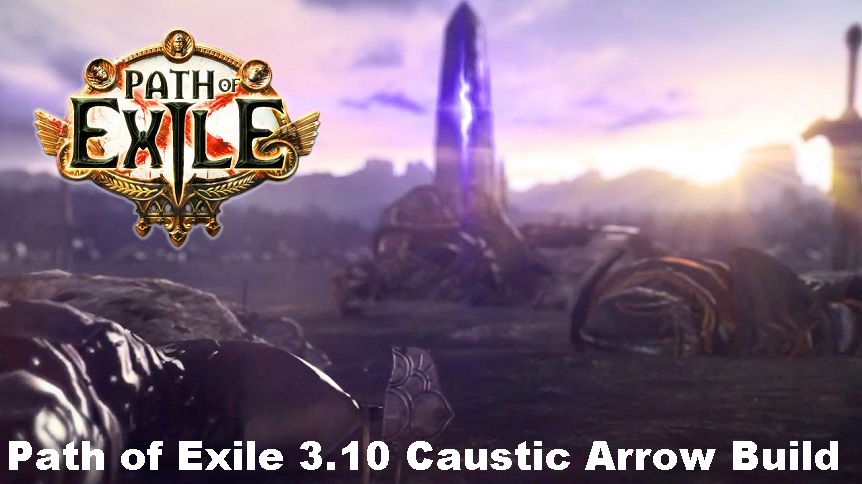 The Caustic Arrow build can be extremely effective in Path of Exile. It is a PoE build in which you may find that there is a lot of cheaper alternatives in places to use your PoE currency more wisely, but ultimately it shouldn’t set you back too much. In this short guide, we will give you a better idea of what to look for to make this PoE build, including gear, PoE uniques, and PoE item stats to be aware of before going into it.

Rare PoE Item Stats to Look Out For

When it comes to your rare PoE items stats, there are a few things that you will need to look into. These include chaos and projectile damage, as well as evasion, life, elemental resistance, intelligence and damage over time. As for your rare weapon, you will want to try and find a decent rare bow that offers both +1 level of Socketed Gems and +2 level of Socketed Bow Gems.

As for your PoE Unique, an essential PoE item is the Essence Worm. This ring offers you the chance to use an Aura, without having to worry about reserving mana. You can then use it to increase your damage over time with Aura Malevolence. Another Unique you will need is The Coming Calamity, which is a body armour that helps support the Herald of Agony, whilst reserving mana. A handy tip is to delve the initial levels to help find the crafting where you can get two green sockets for 25 PoE orbs, chromatic orbs to be exact. Once the recipe has been unlocked, use the two green and one red socket.

Weapons wise, the Silverbough bow is a great choice. This unique weapon offers +1 level of socketed gems, and +1 of socketed bow gems. If you are looking for a cheap bow to use, then this is a good way to go. Another recommendation is the Atzire’s Step boots, which are capable of working with practically all evasion PoE builds. They also offer life, movement speed and the chance for you to dodge spells too.

The Divine Life Flask is a must to keep you alive with Instant Recover. Then the Jade Flask is useful for increasing your evasion, which can be improved further with increased duration and evasion ratings during flask affect stats. A Quicksilver Flask meanwhile will help you to speed up your clearing, and Witchfire Brew can increase your Damage over Time, as well as increasing your evasion. There is an expensive flask in the form of Dying Sun, but it isn’t essential. What it does do however is increase the clear speed with two extra projectiles.

What Gear to Use

As previously discussed, the Coming Calamity is a great armour to use. The Lion Pelt makes for a useful helmet and looks especially intimidating. Legion Gloves have a number of resistances to help you, and also boost attack, armour and maximum life, the same which can be said about Titan Greaves. The Decimation Bow makes for a great weapon, with increased critical strike chance, as well as Damage over Time. If you are looking for an intelligence and dex boost, then be sure to add the Turquoise Amulet to your gear lineup, which also increases fire and lightning damage. As for rings, the Coral Ring boosts strength, maximum life, evasion, and mana regeneration. Finally, to keep up with those resistances, check the Stygian Vise to finish up your gear.

Ultimately, the Caustic Arrow gives you something that allows you to deal a great deal of damage. Not only will it hurt your enemies on impact, but there is also the chance of spreading debuffs and more to quickly clear out anything that happens to stand in your way. Speed plays a great part in the Path of Exile build, so if this is something that you tend to look out for, then this PoE build may well be for you.

Have you tried out this Path of Exile build? Let us know in the comments section below!