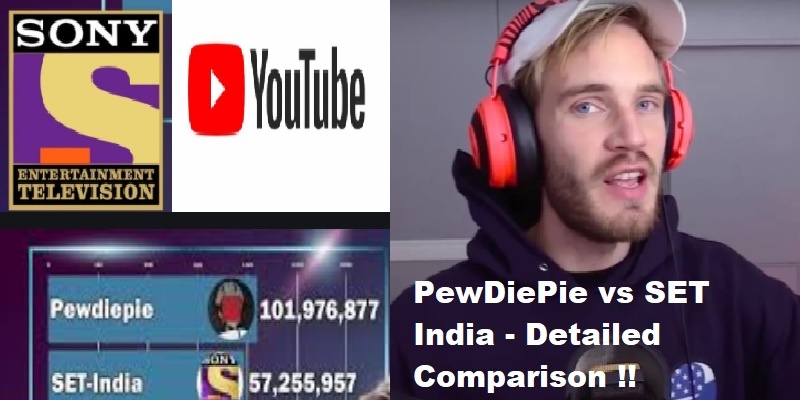 Fan of both Set India and PewDiePie? Want to check who is better? Then go through this post as this post will give you a detailed description of PewDiePie vs Set India.

In case you are thinking about what SET India is,  Then let me tell you that SET India is a YouTube channel originated in India. It is particularly famous for its entertainment videos for Indians. It started making videos on YouTube on September 20, 2006. And recently it reached another milestone.

Whereas Sony Entertainment Television is an Indian Hindi-language pay television channel that was launched in October 1995.

Taking about PewDiePie, whose real name is Felix Kjellberg, is YouTube’s biggest independent video-maker with more than 104 million subscribers.

Felix Arvid Ulf Kjellberg is an England-based Swedish YouTuber, comedian, gamer, and philanthropist, known primarily for his Let’s Play videos and comedic formatted shows.PewDiePie was once the ruler of Youtube by the number of subscribers. However, T-Series dethroned him in 2019 and became the most subscribed Youtube channel in the world.

Both SET India and PewDiePie have come out as strong competitors especially in Lockdown when everybody is stuck at home and entertainment sources are limited now.

Both have encashed their popularity and their number of viewers and subscribers have surged to another level.

Is Softonic Safe and Legal to Use? (Honest Review)

Let us have a look at SET India vs PewDiePie.

SET India is having around 83,334 new subscribers every day on an average. On the other hand, PewDiePie’s daily subscribers’ growth is nowhere near that.

PewDiePie is definitely winning more hearts with a pro-active response.

PewDiePie and SET India are immensely popular and achieving new milestones every day. You will be surprised to know that PewDiePie has over 4.2K uploads on his channel while SET India has 38.5K uploads. So here, PewDiePie is leading the race.

Even if we check about daily average views of both channels then also SET India is winning here. SET India usually gets an average of around 84,762,800 views on a daily basis. Whereas PewDiePie is very far from SET India in terms of daily views of 10,038,200.

The content offered by both channels is completely different.

Their content is family-friendly and anyone can watch it.

On the other hand, PewDiePie got famous after playing and reacting to scary and action-filled video games. His gameplay, commentary, and reactions have got him a huge fan following.

This is all about the PewDiePie vs Set India. Both channels are serving our entertainment platters with equal enthusiasm. Who is better between two completely depends on your taste of the content.

YouTube Music: Google Will Shut Down Play Music in October | Check Why?

If you found this informative enough, then don’t forget to share your views in the comment section !!