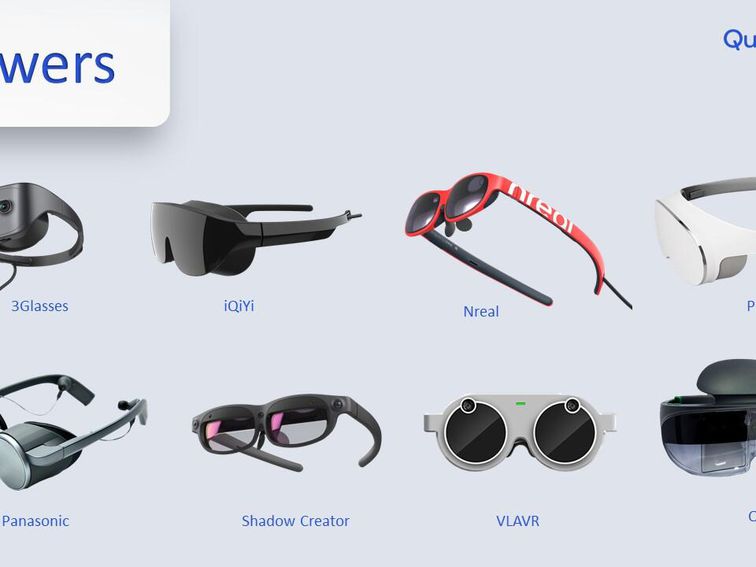 To learn about the future of VR, I met in VR. Qualcomm invited me to a briefing inside Spatial’s app on an Oculus Quest, where a virtual Hugo Swart (head of mixed reality tech for Qualcomm) floated, ready to show us slides and talk about where VR was heading.

Midway through, Swart vanished into a vapor of dots. Then he came back. VR is still a work in progress, at least when it comes to a future replacing smartphones. But headsets from Oppo, Panasonic and more are on their way to act as 5G-connected phone accessories in a wave of devices hitting in the next twelve months.

For now, VR rolls through mostly through headsets connected to PCs, or with standalone headsets like the Oculus Quest. But odds are strong VR and AR’s real destiny is to ride alongside phones, plugging in or linking up to act as immersive add-ons. That’s Qualcomm’s plan, working with a range of partners to make what the company calls “XR Viewers” that will work with a certain range of phones with Qualcomm processors starting this year. Despite the coronavirus slowdowns globally, Swart says partners are still on track to release hardware later this year.

Qualcomm first announced its plans to make phone-connected AR and VR headsets last year, along with a higher-powered Snapdragon XR2 chip for standalone headsets that could end up being the roadmap for future devices beyond Facebook’s Oculus Quest. The plug-in viewers won’t use the XR2 chip, says Qualcomm’s Swart: instead, expect lower-cost components like the company’s previous XR1. They connect through USB-C with Snapdragon 855 or 865 phones that are certified by Qualcomm. Within the next 1-4 years, says Qualcomm, these viewers will go wireless, using 6GHz Wi-Fi. Plug-in headsets that work with phones are probably the most likely path to get to 5G VR/AR for the moment, especially with 5G add-ons for standalone headsets adding extra cost and possibly draining battery life.

Most of the XR viewers listed above are “ready for 2020,” Qualcomm confirmed to CNET. But hardware will also roll out through 2021, over a twelve-month period. VR/AR headset partners are a mix of known and unknown players: Panasonic, Pico, VLAVR, Oppo, 3Glasses, iQiYi, Nreal and Shadow Creator. Phones that will work with these headsets will include models from Asus, OnePlus, Oppo, Black Shark, Vivo, Smartisan, Vivo and ZTE.

New VR hardware hasn’t emerged since the end of last year, but the plug-in viewers coming soon could bring prices down for VR and eventually work better with phone apps, something that current standalone VR like Oculus Quest isn’t great at.

Qualcomm is working on plug-in viewers in parallel with standalone headsets, so it’s a solid bet that both trajectories are going to be pursued at the same time, with them maybe meeting in the middle down the road once headsets get small enough.