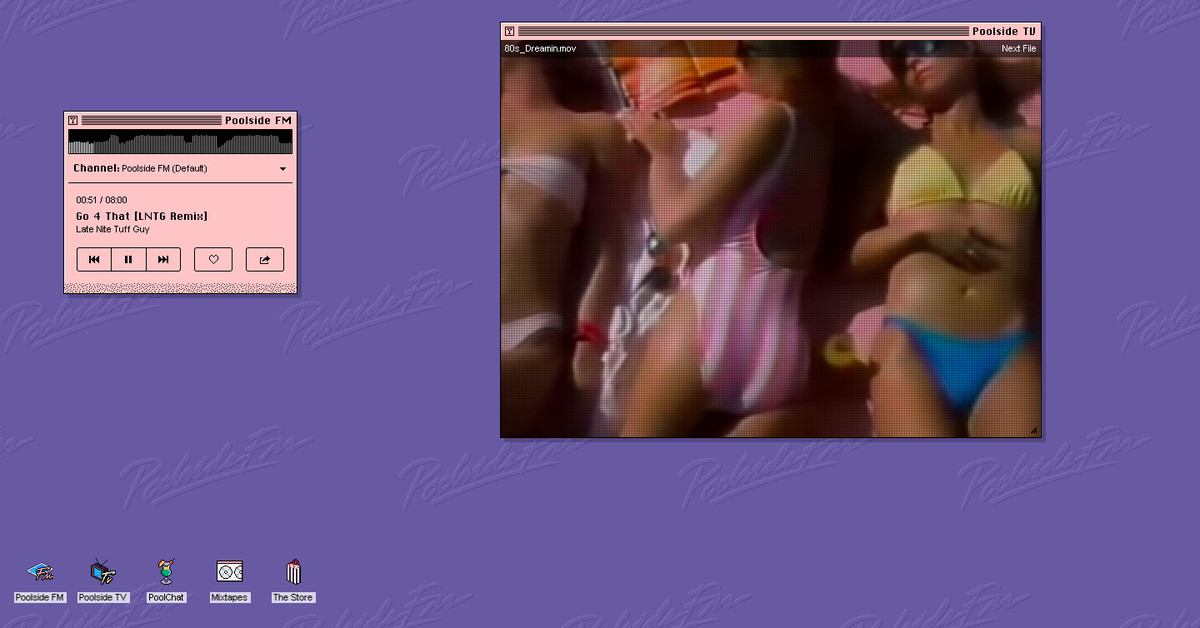 Poolside.fm, an online radio station, might be the chillest place online: a place where it’s perpetually the summer of 1997, and where, as the intro copy says, “safety comes second and drinks come first.” And that feels true, when you boot up the page — it looks like an Apple desktop from the late ’90s, and retains mostly the same functionality. Curated audio is piped in via SoundCloud, and it’s matched with equally considered video streams. The effect isn’t hallucinatory, but it does make you feel like you’re somewhere you can’t be right now. Like chilling out in a park or on a beach with your pals, watching the roller skaters float by.

And that, according to the site, is the point. “Poolside FM was conceived one awfully rainy summer in the Highlands of Scotland – a virtual vacation, if you will,” reads the copy on the Poolside.txt file. “The audio and video streams are curated to inject a healthy dose of serotonin into your brain.” Per its founder Marty Bell, the site has dosed a bunch of people with the neurotransmitter they crave — it crossed 1 million listening sessions in the last year with zero staff and zero marketing. Online, that’s about as close as you can get to becoming a being made of pure sunlight.

While it’s not the official start of the summer — that’d be June 20th, the date of the solstice — temperatures are rising. Quarantine can’t stop the weather, even if it still isn’t safe to gather in groups, and even if it won’t be for a while. Around Brooklyn, in the small snatches of time I’m outside, I’ve started to see bare legs again, which has always been the sign that the seasons are in flux. Poolside brings that summer feeling indoors, wherever you have an internet connection. And some more good news: Bell, the founder, said in a tweet that they’re about to drop a mobile app for the summer. Serotonin slaps.