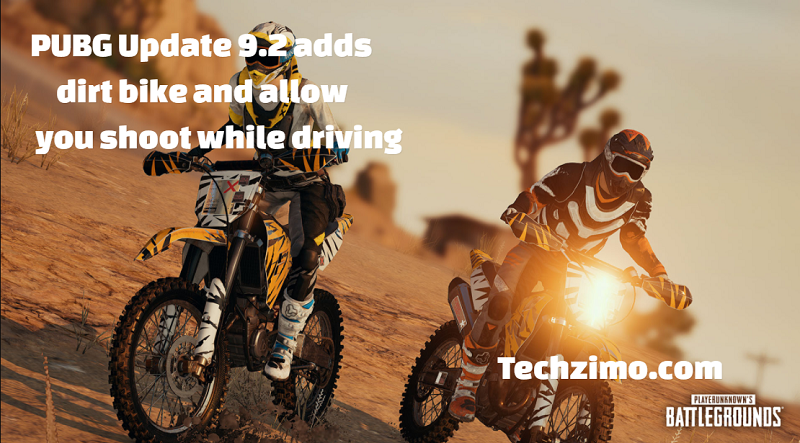 PUBG Update 9.2 has been introduced for PC and gaming console versions and bringing mouth-watering features like a dirt bike, Battle Bride pass, and the ability to shoot while driving.

After announcing PUBG Mobile Indian version, developers of the game rolling out the 9.2 update with a new vehicle, driver shooting, and Battle Bride Pass. The latest update of the battle royale giant is live on the game’s test servers. One of the foremost reasons behind the liking of this update is Dirt Bike that is the light variant of Motorbike and will spawn on all maps except Karakin. Apart from this gamers will experience driver shooting mode along with enhanced weapon balance adjustment.

Here are the latest gameplay changes, players will experience:

The whole new Dirt bike is a single-seater vehicle that will almost 50% of bikes that exist in the game. The dirt bike comes with an individual clutch system that will rev the engine and an improved suspension for offroading. The latest vehicle will be available in all game matches including normal, custom, and training mode as well.

Apart from the introduction of a new vehicle in the form of Dirt Bike, gamers will also enjoy Driver shooting mode with the PUBG update 9.2. This new mode will offer the gamers ability to and aim shoot opponents in the match. Via this mode drivers will be able to hold fire sidearm weapons and maintaining control over the vehicle. This was one of the most desired features of PUBG players and as it is rolling out gamers are really happy. Though you can’t unlock all the sidearm weapons now.

Here is the list of Sidearm weapons that will work with the Driver shooting mode:

Close by, PUBG Corporation is presenting the Battle Bride Pass, which brings a whole fight based on a solitary character as opposed to a topic. This Battle Bride Pass depends on Sadiya Qureshi, the saint from Karakin’s legend highlighted in PUBG movement funnies. There are 15 levels in this new pass and it advances freely from the Survivor Pass. The Battle Bride Pass will run for 28 days from the date of procurement.

You can peruse more about the new highlights, new vehicle, and more data on the Battle Bride Pass on the PUBG site.