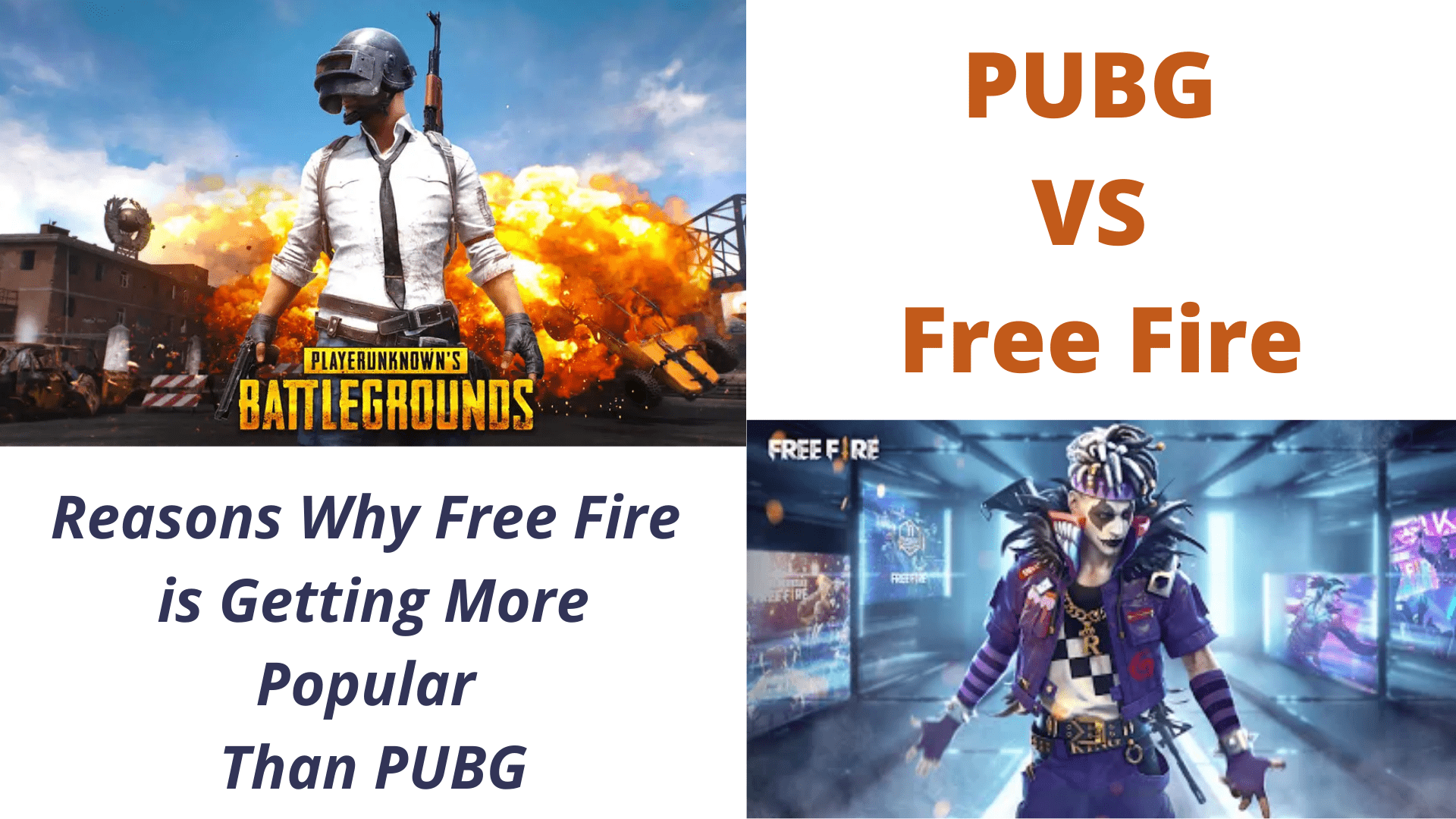 Do you want to play a good Battle Royale game but confused about PUBG VS Free Fire? Do not have time to play both the games? So, this article is exclusively for you! Today I am going to share which giant platfrom to choose and what various reasons why Garena Free Fire is Getting More Popular Than PUBG. Both games are online multiplayer games and have similar gameplay.

PUBG has gained a lot of popularity in very little time but still, Garena is the main rival of PUBG, gained popularity a little late. The ultimate aim of both the games is the same, that is, a wining man gets chicken dinner or booyah. Tencent stated that the company made enormous earnings as people around the world are playing PUBG during the lockdown. On the other hand, Garena announced that their popular BR game reached a user peak of 80 million in a single day. So, both are the competitor of one another.

PUBG, Players Unknown battlegrounds, is one of the most popular names when things come to mobile gaming. Launched in 2018, PUBG has gained a lot of popularity overseas. People around the world love to eat Chikce dinner that winning man gets in the last. PUBG MOBILE gives the most intense free-to-play multiplayer action on mobile. Drop-in, gear up, and fight. The game has several modes such as Survive epic 100-player classic battles, payload mode, and fast-paced 4v4 team deathmatch and zombie modes. Survival is the only key to be the hero of the match.

Garena Free Fire is an amazing survival shooter game available exclusively for mobile. Grena contains a group of 50 rather than 100. After a regular interval of 10 minutes, the game places you on a remote island ad ply with other 49 players who all are finding ways to survive. A safe zone is incredibly beautiful and players can stay here for as many times they want to. The starting point is chosen by the player and finally, land into the battlefield. Drive vehicles to explore the vast map, and hide in trenches. Do anything with only a single goal to survive.

PUBG Ban: Why are PUBG and COD not banned in India? Can It Be Banned in August 2020?

Both games are giants in mobile gaming and getting lots of love from people. But still which can go upper hand is what needs to be discussed!

PUBG uses the Unreal engine which is very popular in the world of gaming and delivers very smooth and realistic graphics. This engine works fine with devices of Android 5.1.1 or above and should have at least 2GB memory. A smooth and stable internet connection is needed to play PUBG.

While Garena Fire Free has a different case. The game is designed to wor perfectly in low-end devices. Smooth graphics and easy controls are Free Fire’s main features.

PUBG mobile has 100 million downloads on Google play store and App Store. In comparison to this, Free fire stands out to be the most popular battle royale game with 500 million downloads. Even Google Trends shows a stiff difference in terms of the popularity of both games.

Free Fire is small in size and runs perfectly on low-end devices as well, thus it is more popular.

Free fire is full of different characters and a player can choose from a big list. Two characters, Adam and Evo are free and rest can be gained in the game further. While on the other hand, PUBG has any characters, and thus this is where PUBG lacks behind.

Garena Free fire characters have a special ability by default and later can be upgraded to other abilities.

Both games have a long list of vehicles. PUBG can have a wide array of vehicles to drive on land, air, and water and thus brings more paying experience for players.

The vehicles in PUBG Mobile found in different areas of the map and contain about 40-100% of fuel. PUBG vehicles are:

Why Free Fire is better than PUBG?

There are several reasons that need to be considered before taking a final stand:

Well, friends, this is all about PUBG VS Free Fire. I hope you would like this comparison guide.

This would be beneficial for you in choosing one of your interests. Both have their own pros and cons and thus you can choose a better one!