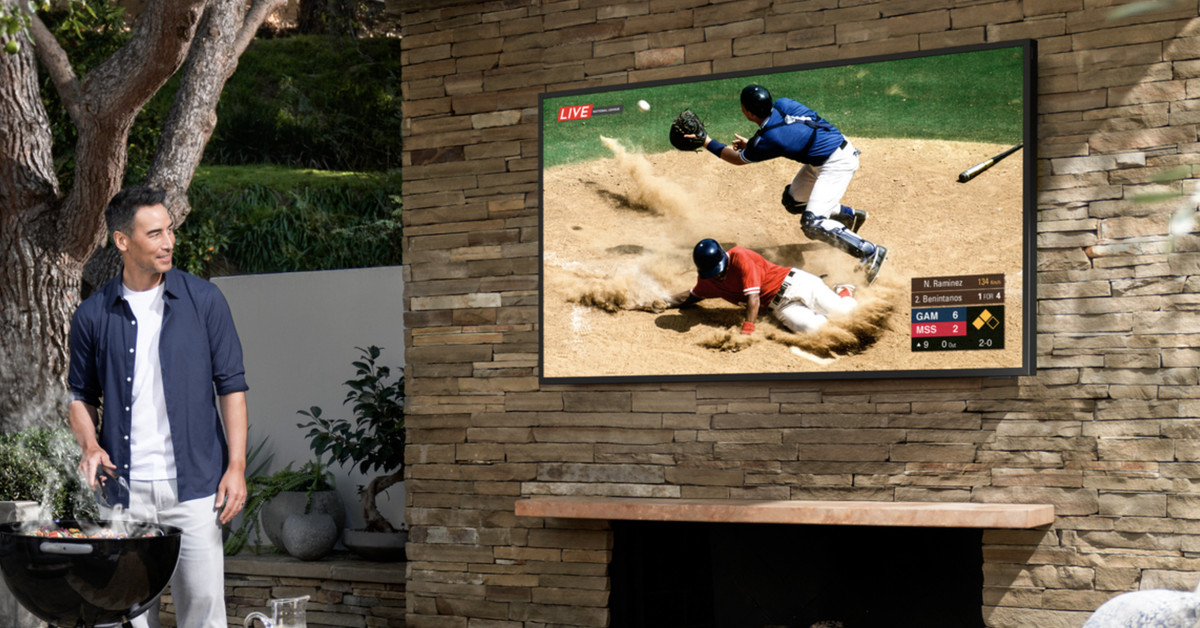 Samsung is a dominant force when it comes to TV market share in living rooms, and now, the company wants to extend that success to the outdoors. Today, Samsung is announcing the Terrace, the latest TV in its “lifestyle” family that includes the Serif, Frame, and Sero. The Terrace is designed for outside viewing: it’s IP55 water and dust resistant, and the screen can crank up to a brightness of 2000 nits to help you see everything even when the sun’s out.

If you’re unfamiliar with specialty outdoor TVs, the prices of the Terrace might strike you as wildly expensive. The 55-inch model is $3,455, the 65-inch is $4,999, and the 75-inch display is $6,499. That’s a substantial increase over what you’d pay for the company’s regular QLED 4K TVs and even some 8K models. But outside TVs from companies like SunBriteTV always cost a ton more; here’s a 65-inch model for $3,499 and a 75-inch set for a dollar short of $10,000. These things are just inherently pricey, which comes from the weatherproofing and other tech upgrades that go into them.

Samsung is highlighting that, for all its toughness against the elements, the Terrace is still rather sleek, with inoffensive bezels and a depth of 59 inches. There’s also a built-in HDBaseT receiver, and Samsung says the Terrace “requires only an AC outlet and mounting” to get going. (HDBaseT can transmit 4K video, your audio, and power all over the same cable at long distances, which is why it’s the go-to technology for outdoor sets.)

As for the panel itself, the Terrace is comparable to Samsung’s standard, upper-end QLED TVs. It’s got full-array local dimming, extended quantum dot color, an antireflective coating, and also includes the company’s signature ambient mode tricks, so the TV can show artwork, photos, or other content when you’re not actively using it.

The Terrace is launching today in the US and Canada and will come to Germany, Australia, New Zealand, and other regions later this year. In addition to the consumer model, Samsung says it’s also planning a “professional” version that will also arrive later in 2020.

Did you notice the soundbar beneath the TV in Samsung’s images? To go along with the Terrace TV, Samsung is introducing the Terrace Soundbar. It, too, is rated IP55, features distortion-canceling technology, and the company says it “packs powerful and crisp audio for a truly immersive outdoor home theater experience.”

To wrap up, let’s get a couple more looks at the extravagant homes and limitless wealth featured in Samsung’s marketing images for the Terrace. Quarantine doesn’t seem so bad for these people, though I’d wager a more likely spot for the Terrace is outside a home in the suburbs somewhere.