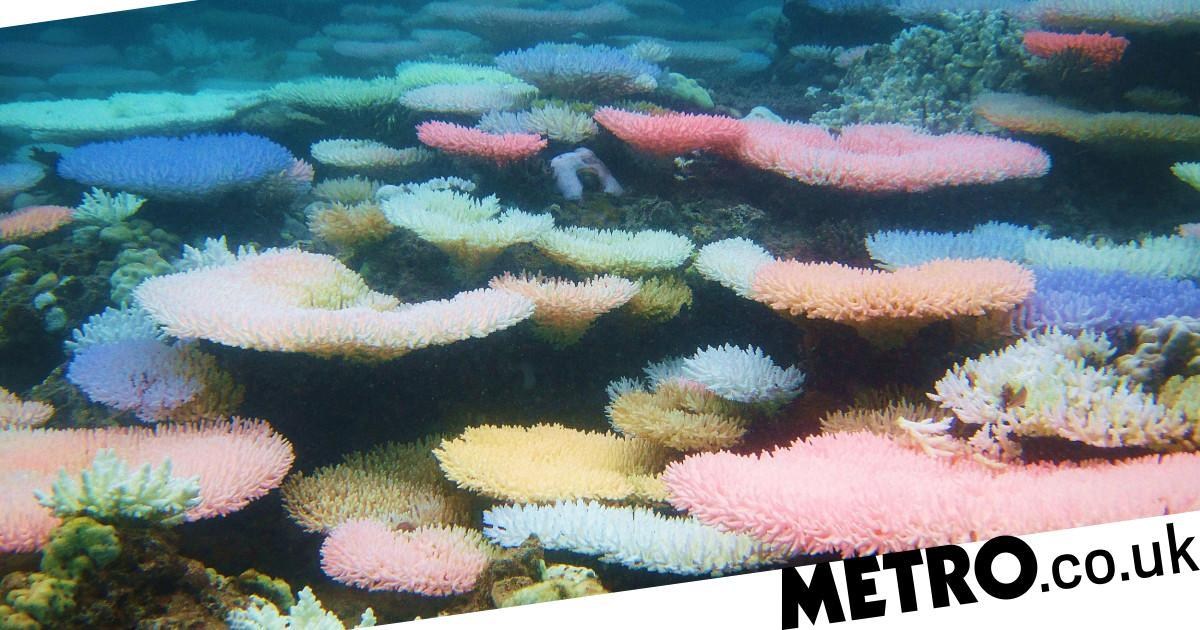 Some corals emit a ‘sunscreen’ in the form of a dazzling colourful display to protect them from rising sea temperatures, according to new research.

Scientists at the University of Southampton believe that the corals emit the bright neon colours in a fight for survival.

The team from the university’s coral reef laboratory explained in a report published in the journal Current Biology that many coral animals live in a fragile symbiosis with algae embedded in their cells.

A rise in water temperature of just 1C can cause this relationship to break down causing the algae to be lost leaving the coral’s limestone skeleton exposed through its transparent tissue leading to the fatal condition of coral bleaching.

But the study found that in mild or brief warming incidents, some coral produced a type of sunscreen which takes the form of the colourful display which encourages the algae to return in an ‘optical feedback loop’.

‘In healthy corals, much of the sunlight is taken up by the photosynthetic pigments of the algal symbionts.

‘When corals lose their symbionts, the excess light travels back and forth inside the animal tissue, reflected by the white coral skeleton.

‘This increased internal light level is very stressful for the symbionts and may delay or even prevent their return after conditions return to normal.

‘However, if the coral cells can still carry out at least some of their normal functions, despite the environmental stress that caused bleaching, the increased internal light levels will boost the production of colourful, photoprotective pigments.

‘The resulting sunscreen layer will subsequently promote the return of the symbionts.’

‘As the recovering algal population starts taking up the light for their photosynthesis again, the light levels inside the coral will drop and the coral cells will lower the production of the colourful pigments to their normal level.’

Dr Cecilia D’Angelo, lecturer of molecular coral biology at Southampton, added: ‘Bleaching is not always a death sentence for corals, the coral animal can still be alive.’

‘If the stress event is mild enough, corals can re-establish the symbiosis with their algal partner.

Emmerdale boss speaks out on show’s ‘exciting’ return to filming

GTA publisher Take-Two plan 93 games by 2025, including from Rockstar 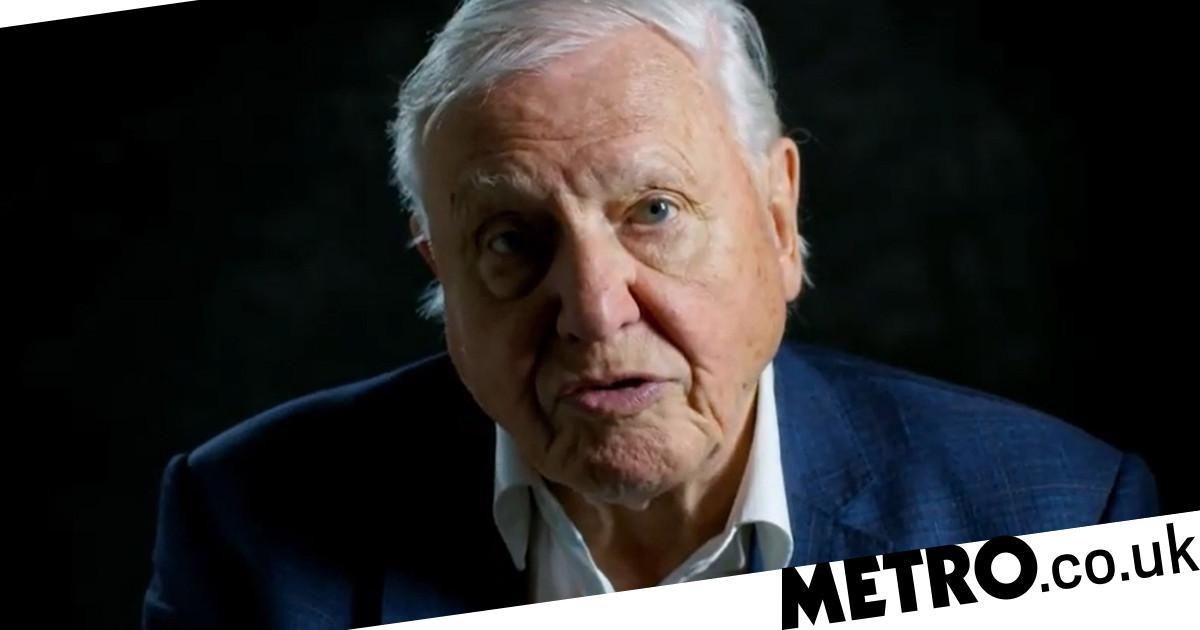 Sir David Attenborough has shared his fear climate change has been ‘swept’ off the front pages by the coronavirus pandemic, as he called for a renewed focus on environmental issues.

Speaking about the current health crisis the world is facing, the beloved 94-year-old broadcaster said Covid-19 has made the issue of climate change feel as if it’s a thing of ‘the distant future’.

However not all is lost as he suggested the pandemic could make nations ‘co-operate’ like never before.

See, there’s always a silver lining to these things.

Speaking on the So Hot Right Now podcast, to be released tomorrow, Sir David said: ‘The trouble is that right now the climate issue is also seen as being rather in the distant future because we’ve got the virus to think about.

‘And so what are the papers full of? The virus. Quite right, that’s what I want to know about, too.

‘But we have to make sure that this issue, which was coming to the boil with the next COP meeting in Glasgow, has suddenly been swept off the front pages. And we’ve got to get it back there.’

Still, Sir David can only know so much and when asked whether he saw a solution to the decreased awareness of climate change, he said: ‘No, if I knew that I would be a dictator but I’m not.

‘I don’t know – we, you and me and lots of others like us have got to keep on going on about it but the clock is ticking.

‘The danger of the Arctic and the Antarctic warming is becoming greater day by day.’

Sir David went on to tell the podcast hosts, journalist Lucy Siegle and film-maker Tom Mustill, that while he didn’t know what the end outcome would be, he did hope the pandemic shows the nations of the world ‘survival depends on co-operation’.

He added: ‘If that happens, that’s going to be a first in human history.’

Praising the work of ‘remarkable’ climate activist Greta Thunberg, 17, he defended her from critics, suggesting they are not ‘particularly well informed’.

He went on: ‘And in fact if you aren’t particularly well informed about the natural world, and the minute you find that you can’t get to your work to do what you want to do, or what you need to do to earn a living, because somebody has stopped you because they are talking about an issue you don’t know about, it shouldn’t come as a surprise that there will be some people as a consequence of that who will act in an outraged way.’

The pandemic has caused an ‘extreme’ drop in global carbon emissions 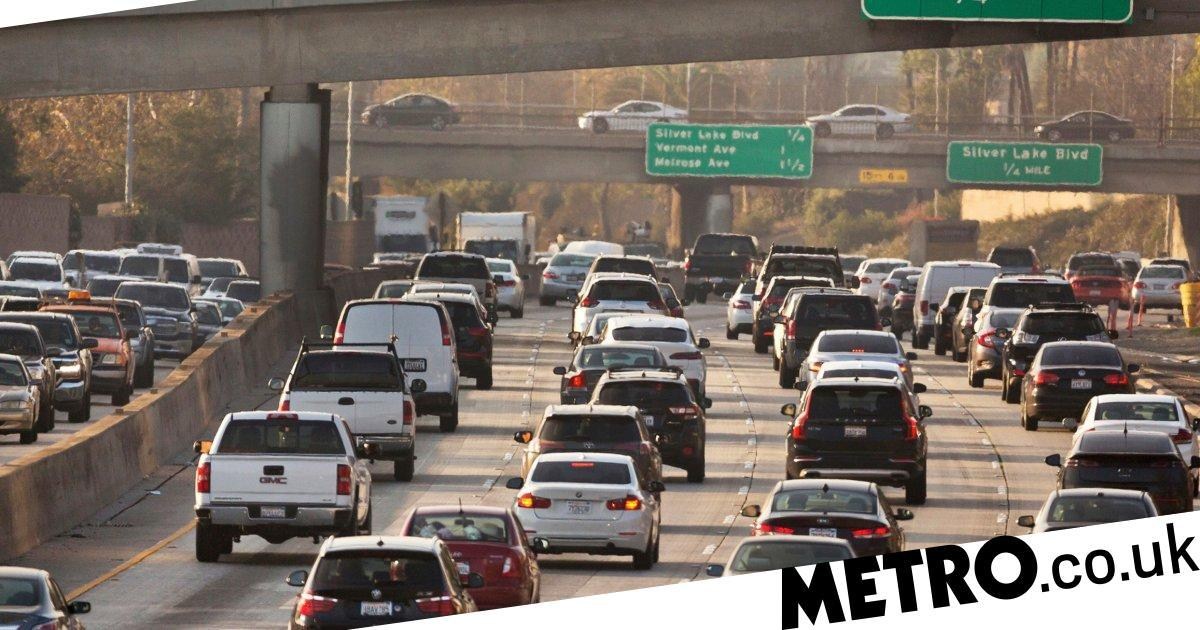 The worldwide coronavirus pandemic has caused global carbon emissions to drop beyond all expectations.

With millions of people around the world confined to their homes, the environmental impact of cars and planes has been curbed.

According to new research, carbon emissions have fallen by a sixth around the world.

However, the ‘extreme’ reduction in emissions is ‘likely to be temporary’, said Professor of Climate Change Science Corinne Le Quere, of the University of East Anglia.

Daily emissions decreased by 17% – or 17 million tonnes of carbon dioxide – globally during the peak of the confinement measures in early April compared to mean daily levels in 2019, the study indicated.

The last time emissions were this low was 14 years ago back in 2006.

Emissions from surface transport such as car journeys account for almost half (43%) of the decrease in global emissions during peak confinement on April 7, according to the study, published in the journal Nature Climate Change.

Emissions from industry and from power together account for a further 43% of the decrease in daily global emissions.

Aviation is the economic sector most impacted by the lockdown, but it only accounts for 3% of global emissions, or 10% of the decrease in emissions during the pandemic, researchers said.

The increase in the use of residential buildings from people working at home only marginally offset the drop in emissions from other sectors.

Prof Le Quere, who led the analysis, said: ‘Population confinement has led to drastic changes in energy use and CO2 emissions.

‘These extreme decreases are likely to be temporary though, as they do not reflect structural changes in the economic, transport, or energy systems.

‘The extent to which world leaders consider climate change when planning their economic responses post Covid-19 will influence the global CO2 emissions paths for decades to come.

‘Opportunities exist to make real, durable changes and to be more resilient to future crises, by implementing economic stimulus packages that also help meet climate targets, especially for mobility, which accounts for half the decrease in emissions during confinement.

‘For example, in cities and suburbs, supporting walking and cycling, and the uptake of electric bikes, is far cheaper and better for wellbeing and air quality than building roads, and it preserves social distancing.’

In individual countries, emissions decreased by 26% on average at the peak of their confinement.

At the peak of the confinement, regions responsible for 89% of global CO2 emissions were under some level of restriction.

Data on activities indicative of how much each economic sector was affected by the pandemic was then used to estimate the change in fossil CO2 emissions for each day and country from January to April 2020.

The estimated total change in emissions from the pandemic amounts to 1,048 million tonnes of carbon dioxide (MtCO2) until the end of April.

The impact of confinement on 2020 annual emissions is projected to be around 4% to 7% compared to 2019, depending on the duration of the lockdown and the extent of the recovery.

Paul Morozzo, senior climate campaigner at Greenpeace UK, said: ‘The only way this reduction will mean anything is if governments lock it in as we recover and rebuild.’