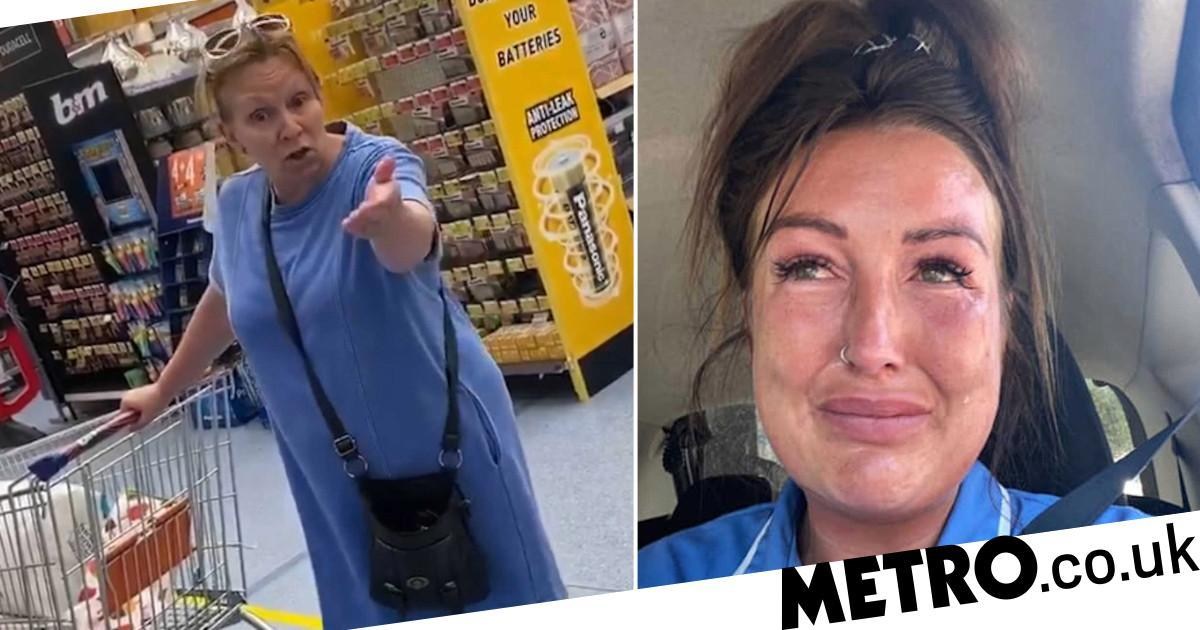 A care worker was left in tears after a woman accused of her ‘spreading germs’ when she went shopping in her uniform.

Kimberley Simpson, from Burton-upon-Trent in Staffordshire, claims an ‘aggressive’ shopper followed her around B&M for 10 minutes ‘shouting’ that she shouldn’t be allowed in the store on Monday.

A video of the confrontation shows the healthcare worker tell the woman: ‘You’re absolutely ridiculous. You should not have come up to me aggressively like that.’

‘How do you know that not all of my clients do not have anything? They are regular clients. I’m not allowed to buy essential items?’

When the shopper tells Kimberley the problem is not specifically linked to the coronavirus crisis, but just in general, she responds: ‘So I’m not allowed to go in anywhere before corona?’

The woman replies ‘no, you’re not’, before threatening to have a conversation with the care worker’s manager.

Taking to Facebook after the incident, Kimberley said she was ‘disgusted’, adding: ‘We have worked so hard, no clients have Covid-19 so we are clearly doing something right.’

She said: ‘I know I’m an ugly crier, but this lady has just followed me around B&M shouting at me saying I’m not allowed in the shop because I’m in uniform.

‘Apparently I’m not allowed to buy non-essential items, how does she know I’m not doing client’s shopping?

‘Apparently I spread germs before and after Corona, and she’s reporting me to my manager who I’ve just spoken to, and they said I’m not doing anything wrong.

‘We have worked so hard, no clients have Covid-19 so we are clearly doing something right.

‘She shouted at me for a good ten minutes before I decided to film her because she was following me.

‘No staff in the shop helped me, no one stuck up for me, a Polish couple told me not to cry bless them and said she’s stupid.

‘I feel really disgusted at this lady’s behaviour, I have done nothing wrong.’

There is ‘no evidence that wearing uniforms outside work adds to infection risks’, according to an NHS England document published on April 2.

It adds: ‘Public attitudes indicate it is good practice for staff to change at work or cover their uniforms as they travel to and from work.’

However, there has been mixed guidance on whether care workers should wear uniforms in public during the Covid-19 crisis, and the advice from the Burton-upon-Trent area is not immediately clear.

Kimberley – whose video received more than 82,000 ‘likes’ and 59,000 comments on Facebook – has seen an outpouring of public support since the footage was published.

One person commented: ‘Honestly no words! Carry on doing the fantastic job you are doing! Try not to let this woman upset you.’

Another put: ‘Lost for words especially as you look after people and care for them! Sending u a big hug bless your heart’.