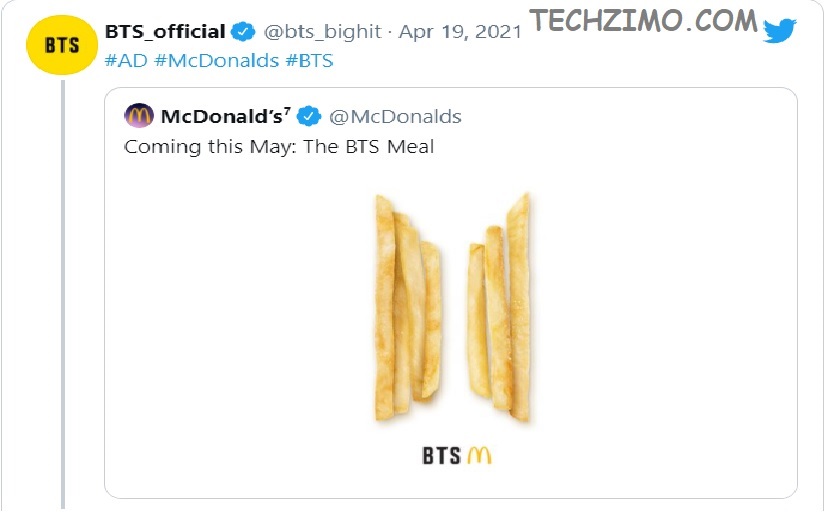 K-pop one of the most popular band is in news everywhere right now likewise fast-food giant McDonald’s. As Mc Donald has recently tweeted about this collaboration and introduced a BTS meal. The south K-pop band needs no introduction. Their tracks have a huge fan following all across the globe. As this can be evident from their last track – It was a huge hit. “Dynamite” makes great numbers on popularity charts. It just broke numerous records on the day of release only in 2020. And now the popular band and McDonald’s collaboration has made us amused by their posts on Twitter handles.  As the largest food chain, giant McDonald’s has joined its hands with the popular Korean stars. And what we all do is that – We can’t keep calm and can no longer wait for the meal that McDonald’s is planning to introduce.

They named the meal “BTS meal”

“The band has great memories with McDonald’s,”  -BTS’ label Big Hit Music said in a statement.

“We’re excited about this collaboration and can’t wait to share the BTS Meal with the world.”

What can be expected in this BTS Meal?

As soon as the announcement was made, ardent lovers of both K-pop and Mcdonald’s started chattering all over the web about it. Their excitement level can be seen at the peak.

Bow the question is –

Where can you get this BTS meal ordered from and When?

Well, this popular BTS meal will be available initially in 40 countries all over the world.

It has started in the USA on 26th May. And in India, you can expect it in early June that is –

If sources have to be believed then the meal will include 10 pieces of Chicken McNuggets, medium fries, and medium coke along with Sweet Chilli and Cajun dipping sauces inspired by the McDonald’s South Korea menu. In the official announcement video, McDonald’s arranged its fries to represent each member of the BTS band.

Related Topics:What can be expected in this BTS Meal?Where can you get this BTS meal ordered from and When?