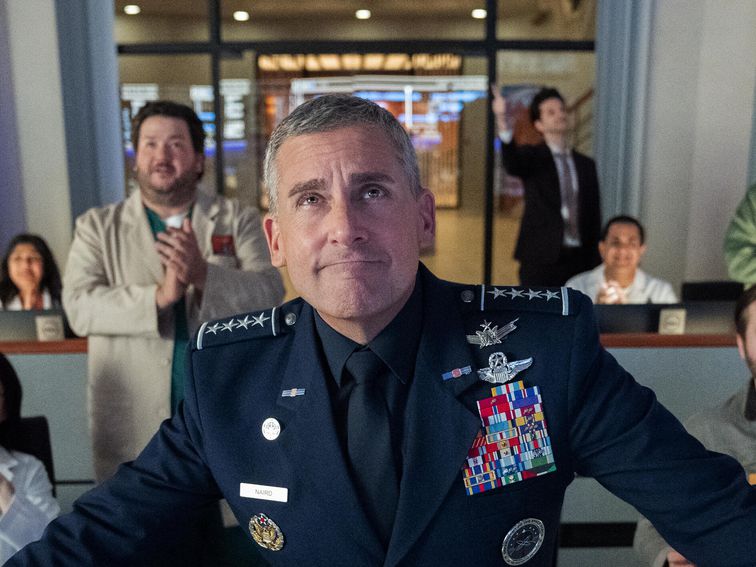 Welcome to Space Force. Netflix sees the funny side of the moon as it puts The Office in uniform, straps into a rocket and imagines how a cosmic new branch of the military will put Americans back on the moon. Armed Americans. It’s one small step for man, one giant leap for war.

The United States Space Force is of course a real thing, splitting off from the Air Force in 2019 as President Donald Trump claims the stars for the stars and stripes. Netflix’s new comedy, streaming starting May 29, begins with a capricious (unnamed) president tweeting that he wants boots on the moon ASAP. And the man charged with the sacred responsibility of bringing war to the Sea of Tranquility is Steve Carell‘s dutiful general, a former fighter pilot who’s gone from top gun to top brass — but knows nothing about space, rockets or connecting the two. “Let’s Apollo 13 the shit out of this!” he declares.

Entertain your brain with the coolest news from space to superheroes, memes to robots.

The general may not know his astronaut from his elbow, but he’s assisted by the technological genius of John Malkovich as a sinuous civilian adviser. Rolling his eyes so hard they practically have an orbit of their own, he’s deeply cynical about the military program as he wrangles both the rigors of science and the chain of command. Immaculately turned out in precise suit and tie at all times, Malkovich brings a gravity to proceedings that adds a sheen of class even when the comedy gets silly.

And Space Force‘s comic pedigree is of course impeccable. It’s created by Greg Daniels, the man behind the American adaptation of The Office and co-creator of King of the Hill and Parks and Recreation. He and Office star Carell conceived Space Force, and you can draw a pretty direct line between The Office and the new show — it’s another workplace comedy in which colleagues with variable levels of competence get on each others’ nerves while working toward a probably pointless goal.

The only difference is Space Force isn’t an office, it’s a sprawling secret base in Colorado. And it’s not the photocopier on the blink in this workplace, it’s a rocket costing the taxpayer roughly the same as four middle schools.

Funnily enough, Space Force blasts off on Netflix just weeks after Greg Daniels’ other technology-themed show Upload began streaming on Amazon. These two shows share a similar feel, in that they’re part of a new generation of post-Office comedies where the traditional sitcom has been replaced by the sort-of-com. There are a lot of these shows about in the streaming age: Bojack Horseman, Barry, Master of None, Bad Girls, Louie, Dead to Me and so on. The sort-of-com is sort of a comedy while sort of looking like a drama.

But is it funny?

Space Force is definitely funnier than Upload, but still feels like the comedy isn’t funny enough, the drama isn’t dramatic enough and the satire isn’t sharply satirical enough. Each episode has its own sitcom-style set piece acting as a launchpad: Carell loses his marbles in a mock-up lunar habitat; he and Malkovich ferret out a spy; and a simulated space war game pits Space Force against the Air Force. In between, scientists clash with soldiers, a Russian observer works to get his hands on both the general’s technology and his daughter, and the Chinese are one step ahead of every giant leap.

A subplot about the First Lady’s redesign of Space Force’s uniform is slyly funny, as is a visit from a Silicon Valley hotshot, but not every subplot connects. Booksmart’s Diana Silver plays the general’s daughter, but her romantic story just kind of orbits around without going anywhere. Neither does the subplot about the general’s wife, played by an underused Lisa Kudrow, which doesn’t offer much apart from the mystery of how she ended up where she is.

Carell is so charming you can’t help rooting for him even when he’s at his most jarheaded. But his character, and in fact most of the characters, could be more sharply defined. There’s a reason we remember Michael Scott, Dwight, Jim, Pam and the rest of The Office’s workmates: they’re so specific with identifiable traits, wants and frustrations. But after watching the first episode of Space Force, heck, even after the entire first season, it’s hard to know who Carell’s general actually is. Is he a bland bureaucrat or a gung-ho fighter jock — or one pretending to be the other? Does he even believe in Space Force?

Alongside him, supporting characters played by Jimmy O Yang and Ben Schwartz are just … there. One’s a publicist and one’s a scientist, and that’s kind of it. Neither is able to sink their teeth into the inspired lunacy which made their Silicon Valley and Parks and Rec characters so memorable. We spend a lot of time with Tawny Newsome‘s Space Force officer before she reveals her ambition to be an astronaut so late in the season it’s like they thought of it at the end of the writing process and never went back to add it to her character.

Yes, Space Force is frequently funny. But for every impeccably timed Malkovich moment or solid gag about who pushes the button to launch the rockets, there’s a cringey line like “What’s after Brexit? Frexit? Swexit?” An AOC-esque congresswoman is referred to only as “Angry Young Congresswoman” and a congressional hearing is interrupted by protestors in Handmaid’s Tale outfits, which is less of a joke and more of a thing that actually happened. Like Daniels’ Amazon sort-of-com Upload, the satire feels like it’s just pointing at things rather than truly skewering them. For example, when Schwartz’s vacuous publicist exclaims, “I should be tweeting this,” it’s not a punchline, it’s literally his job description.

Space Force has the capacity to be a modern Dr. Strangelove, nailing the depressing jingoistic inanity of the drive to militarize space. In comic terms it’s a successful launch, but the small steps could have been gianter leaps.