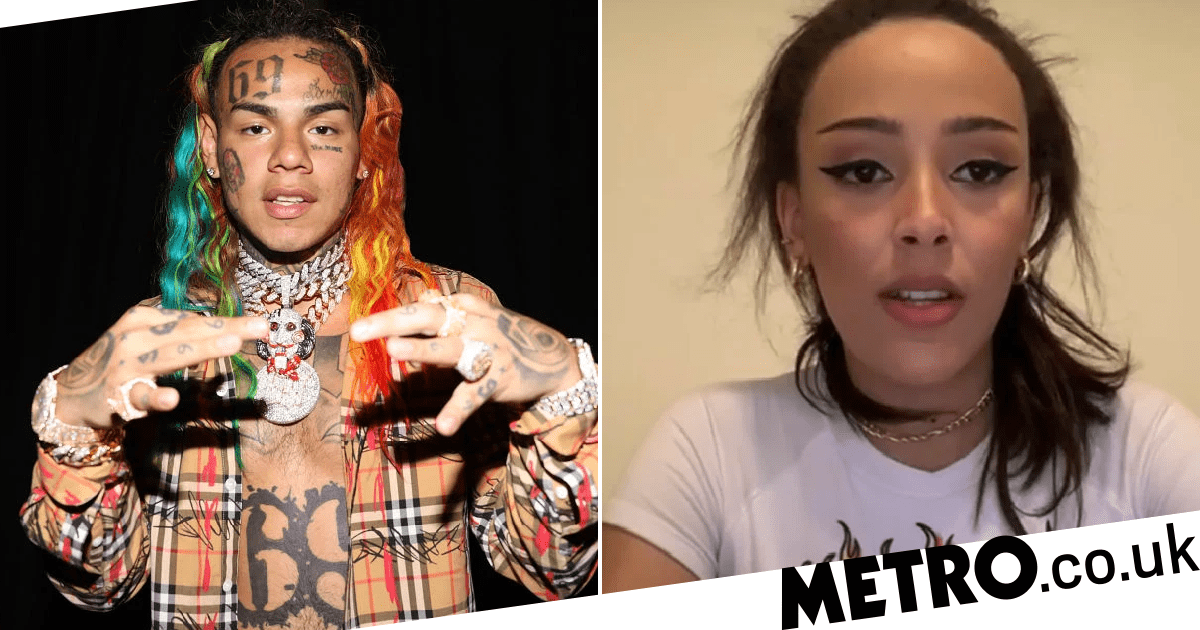 It seems Tekashi 6ix9ine has come for Doja Cat, after she denied claims of racism following her appearance in a chat room.

After the two battled it out on the Billboard chart and Doja came out on top with her song Say So, the Gooba rapper has appeared to hit out at the performer.

Earlier this week Doja Cat – real name Amalaratna Zandile Dlamini – released a statement and later a video on social media denying she was racist after footage emerged of her in an ‘incel’ chatroom.

She was also slammed for her 2015 song, Dindu Nuffin, which is allegedly used by ‘racist alt-right’ groups to mock black victims of police brutality who state their innocence

Now rapper Tekashi has waded into the conversation, posting comments on Instagram this week.

While the comments, posted on a video uploaded by The Shade Room, appear to have been deleted, they were grabbed and appeared to show him writing: ‘She started with the wrong one… give me till tomorrow #canceldoja.’

In another he wrote: ‘Someone called her Doja Dog.’

However, it’s not clear whether Tekashi is referring to the claims against Doja, or a statement she made in the video about landing a number one hit alongside Nicki Minaj – clearly a sore point for 6ix9ine.

She said: ‘Your favourite artist—and there’s no judgment—if they care about that? Wonderful. That’s fine.

That has apparently struck a nerve with Tekashi – real name Daniel Hernandez – who released his comeback single recently following a stint in prison.

After he missed out on the top spot, he appeared to hit out at Billboard, claiming the Hot 100 (the US equivalent of the UK singles chart) gives ‘paid-for numbers ones’ after he came in third place with Gooba, behind Ariana Grande and Justin Bieber’s charity single Stuck With U and Doja Cat and Nicki Minaj’s Say So which was number two.

6ix9ine uploaded a video showing himself scrolling through an unidentified chart forecasting site on his phone, noticing that Stuck With U jumped from number five to number one overnight.

Billboard cleared up any confusion and clarified YouTube’s visible number of plays (over 180 million) for Tekashi’s song Gooba included global plays, while Billboard only counted US-based plays (55.3 million) for its Hot 100.

The apparent tweets come after Doja’s original statement in which she denied she was racist and stated: ‘I’m a black woman. Half of my family is black from South Africa and I’m very proud of where I come from.’

She later did an Instagram Live in which she apologised further.

‘There’s no better apology than me doing what I’ve always done, being on live, telling you guys my f**king truth, and being completely honest,’ she stated during the Instagram Live.

‘My behaviour isn’t something that always needs to be followed, I’m not perfect – I shouldn’t be doing dumb s**t. But also I need to stand up for myself instead of making a video that’s diplomatically and politically correct.’

MORE: Billboard clears up how they calculated this week’s number one after Tekashi 6ix9ine’s ‘manipulation’ claims