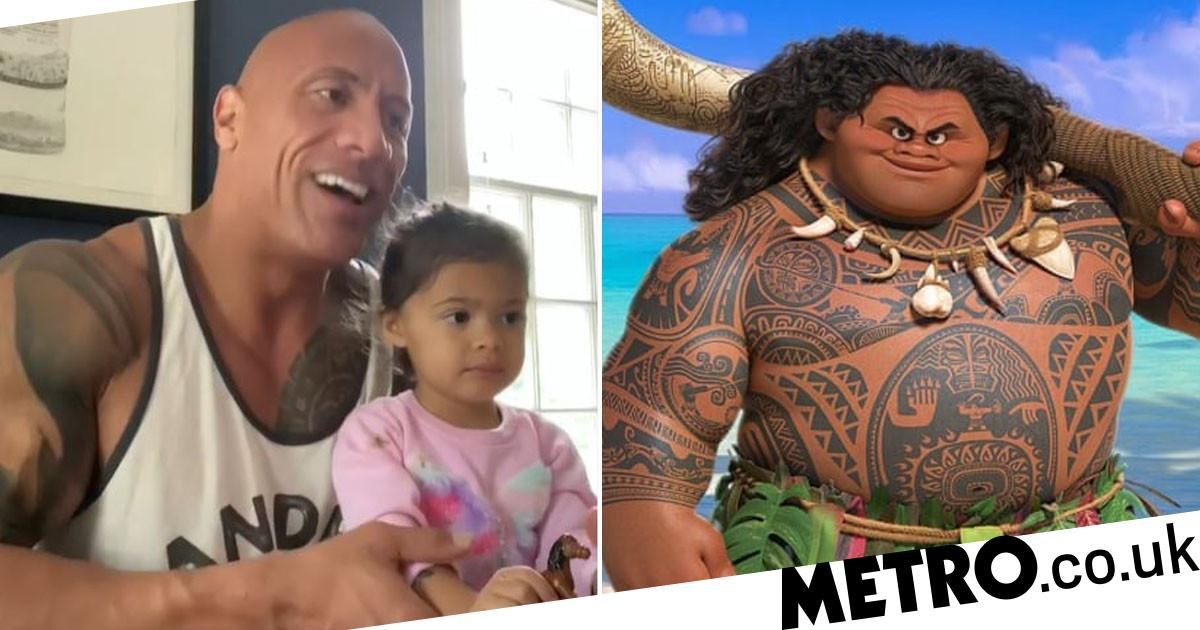 The Rock already had the world’s coolest dad title to his name, way before he starred in Disney’s Moana but it seems like he has a hard time trying to make his kids believe it.

Taking to Instagram, The Rock aka Dwayne Johnson uploaded a very cute and very funny clip of him trying to persuade his youngest daughter Tia, two, that he is Maui in the 2016 animation.

He plays the legendary shape-shifting demigod who ends up befriending Moana and joining her on her mission to restore the heart of Te Fiti.

And despite Moana seeming to be a personal fave in his household, the actor just can’t seem to get little Tia to believe him when he says he is actually Maui.

Even after his numerous attempts at trying to win her over with his impressive sing-a-long knowledge.

Taking to Instagram, The Rock posted a video of himself holding Tia in his lap as they watch Maui sing You’re Welcome from the film – all while he is expertly singing along to the track word from word.

Yep, the movie may have come out four years ago, but The Rock’s lines and musical numbers are forever engrained in his head.

He cutely asks Tia at the end of his performance on whether she thinks daddy is Maui and flashing a smile like butter wouldn’t melt, she hits back: ‘No.’

And so, the process begins again with The Rock hitting play and preparing his vocals for the 3000th time.

‘At this rate it’s even pure speculation that her daddy is also The Rock. I’ll happily take these L’s and laugh as long as I get some daddy/daughter bond 😆💪🏾❤️
#3000timesandcounting.’

When he’s not trying to prove he really is a demigod in disguise, The Rock is busy showering praise on his eldest daughter Simone, 18, who is now following his footsteps into WWE.

Simone, who the star share with his ex-wife Dany Garcia, has signed a contract with the WWE to train to become a professional wrestler, just like he was.

Speaking on The Jimmy Fallon Show about the news, The Rock gushed: ‘She’s signed her contract with WWE. It blows my mind.

‘She wound up being the youngest signee in the history of the company at 16.

‘By the way, she’s 18 now but at 16 she was working her a** off quietly, under the radar, in the ring, getting thrown around and you know … all the bumps and bruises that go with pro wrestling. She hung in there, and I’m very, very proud of her.’

Dwayne was a part of WWE for eight years as The Rock before setting his sights on acting and landing roles in Jumanji: Welcome To The Jungle, the Fast & Furious franchise and the Baywatch reboot.

He is dad to three daughters, Simone, and his daughters he shares with wife Lauren Hashian, Tia, two, and Jasmine, four.

MORE: Jordan Peele pays tribute to ‘wonderful’ Richard Herd after death as he shares iconic Get Out scene