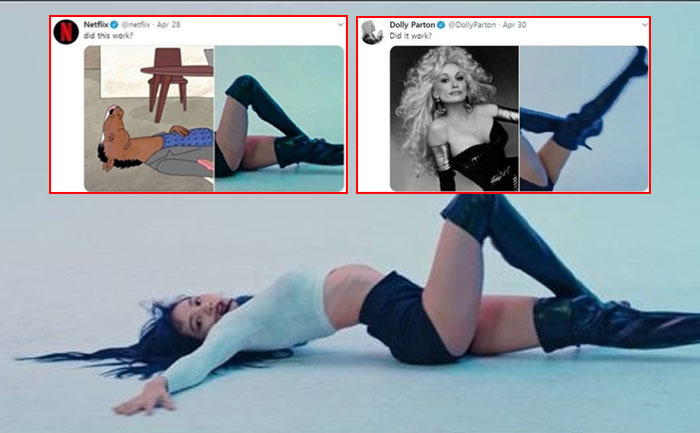 BLACKPINK’s Lisa is taken into account as one of many multi-talented Idol from her band, as she is regarded to be professional at doing a number of actions and she or he is thought to be a professional at dancing. Not simply that, her band members additionally agree on her being the perfect dancer, YG Leisure’s first non-Korean artist frequently posts dance covers on her YouTube account.

Just lately, Lisa appeared in a  dance video that garnered numerous consideration, however what grabbed netizens’ consideration is legs, she by chance began a complete new web ‘Did it Work?’ meme crediting her thigh-high leather-based boots.

Lisa featured in a sultry dance cowl of 6lack and Quin’s 2019 single ‘Mushroom Chocolate’ which was launched on Lilifilm Official’s YouTube channel. Quickly after the video went viral, Twitterati began making their very own mash-ups of her video by linking her legs with photographs of different pop artwork icons resting round — to amusing outcomes.

Well-known celebrities like Stephen Colbert, Lil Nas, Luke Evans, and others have additionally taken half on this viral ‘Did it Work?’ problem, appears to be like like Lisa’s legs have turn into a worldwide phenomenon.

Try the tweets beneath:

The American singer-songwriter tweeted, “Did it work?”

American comic additionally took up the problem and share it on Twitter with the caption, “did it work?”

The tv host, James Corden and shared a photograph of himself together with Lisa’s legs connected, “did it work,” he captioned.

Lil Nas additionally shared a photograph however he ended up getting trolled.

The official Twitter account of Netflix additionally participated within the viral problem and wrote, “did this work?”

Now, take a look at the netizen’s response on this viral meme problem.

Did it work?
Lisa and her legs 😘#LALISA pic.twitter.com/HVg9vw7iCv

To recall, BLACKPINK’s video for Ddu-Du Ddu-Du was the primary Ok-pop act to realize greater than a billion views on YouTube, not too long ago, the girl-gang has collaborated Woman Gaga on her subsequent album Chromatica.